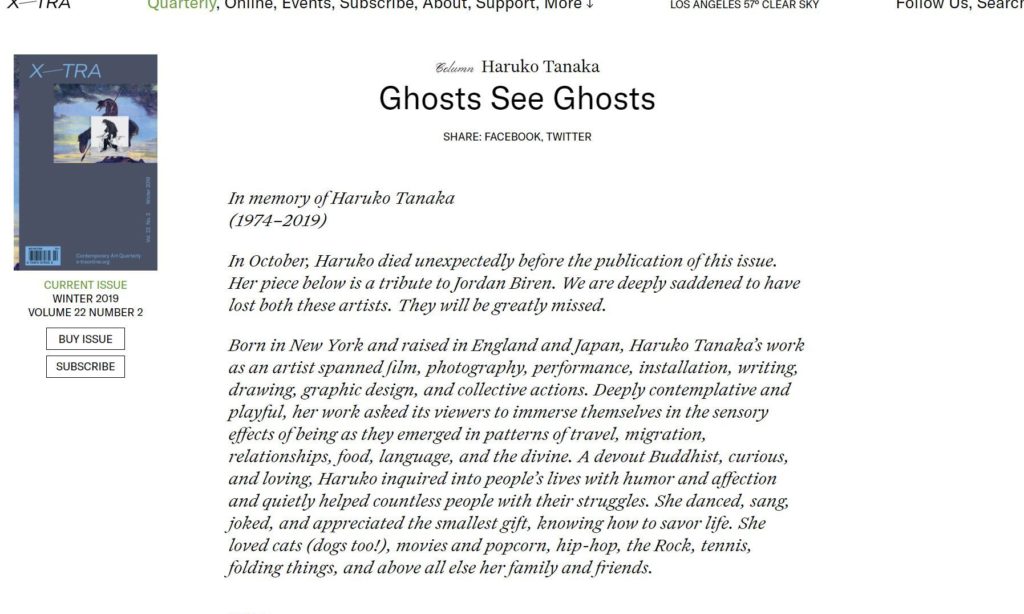 Haruko Tanaka (1974-2019) worked in film, photography, graphic design, and collaborative events, performances, and workshops. She was one half of the educational psychic duo Krystal Krunch with Asher Hartman, worked frequently and closely with Machine Project, and she was a core member of The Readers Chorus in Los Angeles.

Born in the U.S. and raised in England and Japan, Tanaka moved to Los Angeles where she was trained at the University of Southern California (B.A. fine art in 1997) and the California Institute of the Arts (M.F.A. in photography in 2003). She was in residence in 2018 storyboarding her project Cristobal & Cosme: Two young lads born in Japan, a film about the story of the first two Japanese people who set foot in England in 1588. She also finished scoring Aiko Inspires Ukulele Elegies Organically for Readers Chorus, and began a new series of “body scan” sketches based on her work as a psychic and reiki practitioner

Her most recent film was The Soroban and the Present about forgotten places and LA freeways. Her score for Ghosts See Ghosts appears in the winter 2020 issue of X-TRA. Her visual work has been presented at The Library Foundation of Los Angeles, the Japanese American National Museum, Museum of Modern Art, CUE Art Foundation, Armory Center for the Arts as well as the International Film Festival Rotterdam and Asian American International Film Festival. Recent public art commissions include commissions from Sustainable Little Tokyo and The California Community Foundation. With Krystal Krunch she has taught workshops at such places as the Walker Art Center, Pulitzer Art Foundation, Miller Gallery at Carnegie Melon University, Hayward Gallery at Southbank Centre in London, and Extrapool in The Netherlands in addition to many colleges and universities in the U.S.