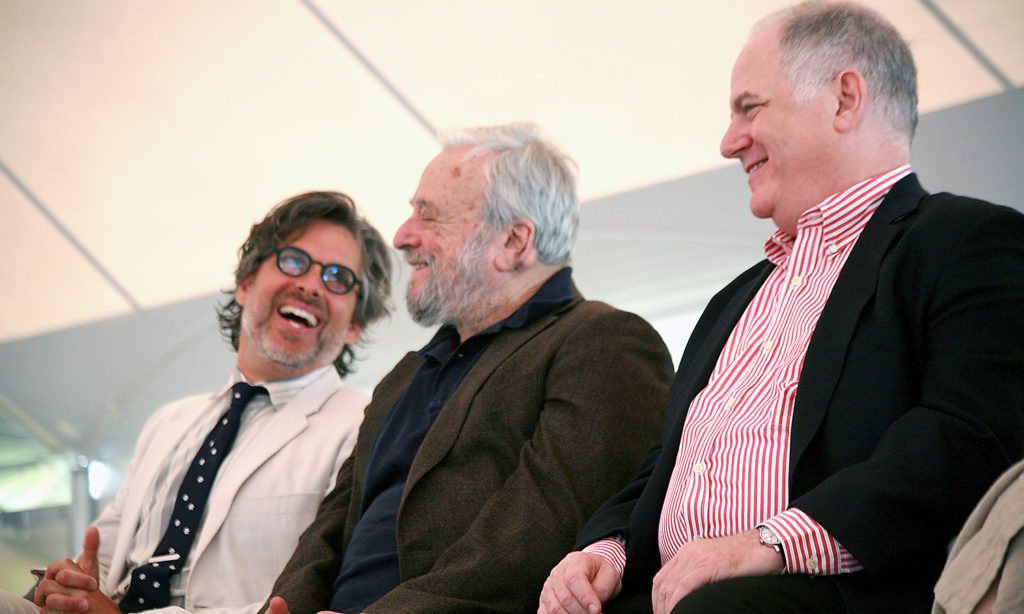 Like countless others, I was moved by Stephen Sondheim’s words and music before I knew his name. In the late 1950’s, his early lyrics for two of the most enduring works in the history of the American theater, West Side Story and Gypsy, gave indelible voice to characters who had never had a chance to sing before on an American stage: confused young lovers desperately trying to find a place for themselves in a New York City succumbing to tribal gang warfare, and a homeless, fatherless family, a fierce mother and her two lonely daughters, trying to survive emotionally and economically in the midst of the Great Depression. Soon after, Steve had his first Broadway hit as both a composer and lyricist – A Funny Thing Happened on the Way to the Forum, a riotous farce refashioned from the classic Roman comedies of Plautus…And so the die was cast. Still barely 30, here was an artist with a range matched by few others in any creative calling in America. Who else has written major works of any genre inhabited by characters as various as those in the Sondheim canon? His musicals have centered on, among others, Georges Seurat and a mass murderer in Victorian England, addled married couples in late 1960’s Manhattan and an isolated Japanese populace confronting the arrival of Westerners in the 1850s, Grimm fairy tale icons and American presidential assassins, elegant Swedish aristocrats convening for a weekend in the country and broken-down Broadway Follies performers staggering through a boozy final reunion.

Steve is the first recipient of the Edward MacDowell Medal to be honored for achievements in musical theater. This is overdue, not only because of his extraordinary and still ongoing career but also because musical theater is America’s one major indigenous art form. Indeed, the American musical is representative of American culture at large: it crossbreeds the high and the low, the tragic and the ridiculous. It reflects every racial, ethnic and immigrant component of the great melting pot. Its roots are as much in vaudeville as in opera, and, in our true national fashion, it often tries to stuff everything into a single thick sandwich: music, dance, drama, jokes, spectacle and magic. At its best, there is nothing like an American musical, and in truth, no other culture, and that includes Britain’s, has really come close to replicating it.

But you have to wonder where the American musical would be today without Stephen Sondheim. The chronicle of the modern musical runs less than a century, and Steve’s contributions have defined and dominated more than half of that span. The first half of that history was arguably defined by Steve’s mentor Oscar Hammerstein II, the playwright and lyricist whom he met as a child through the happenstance that Hammerstein was in his mother’s social circle. It was Hammerstein’s Show Boat, written with Jerome Kern three years before Steve was born, that first staked out the possibility that the musical theater could be more than songs, gags and shopworn romantic plots, and it was Oklahoma!, written with Richard Rodgers as Steve was coming under Hammerstein’s tutelage, that solidified that theatrical revolution. Hammerstein died in 1960, just as Steve’s career was coming into full bloom. By then the torch had been passed about as explicitly as it ever could be in cultural history: Steve, while never emulating Hammerstein’s writing style, was determined to build on his mentor’s theatrical innovations, and the rest proved literally history. In show after show, Steve kept pushing the boundaries of the musical even as he forged an incomparable catalogue of songs whose emotional power, wit and musical dazzle never age no matter what fashions in songwriting come and go all around them.

This required not just talent and craft but courage. As everyone here knows, the relationship between an artist of any kind and the American cultural marketplace is always fraught, often treacherous and all too often destructive. To complicate matters further, the musical theater is by definition a financially costly collaborative enterprise. A musical’s author may be lucky enough to secure, say, a commission, a grant, a teaching gig, or a residency at an institution as glorious as MacDowell. But to actually put on a show demands large amounts of capital that usually mandate the sponsorship of commercial producers, with all the burdens that entails. Rodgers and Hammerstein were lucky enough to write their groundbreaking shows at a time when American pop music and Broadway music were synonymous with each other, putting musicals in the commercial mainstream. By contrast, Sondheim and his contemporaries arrived in the theater just as rock came in. Broadway music forever lost its hold on the hit parade not to mention on pop culture in general, making musicals harder to get on.

Steve could have taken the easy way out by trying to pander to the marketplace, but instead his shows became ever more adventurous. He hung in even after some of his most esteemed early collaborators, Leonard Bernstein and Jerome Robbins, abandoned the Broadway theater altogether. He hung in despite being either dismissed or left out entirely in reviews of his early shows, including West Side and Forum. He hung in despite being scorned by some of his supposed colleagues in the so-called New York theater community. In my years as a theater critic, before Steve and I became friends, I did not unequivocally praise everything he wrote, but I was a fierce champion of Sunday in the Park with George. Incredible as it may seem nearly 30 years later, that show aroused such hostility in the Broadway establishment, a hostility comparable to that which greeted its hero, Seurat, in his time – that even I got a tiny taste of the blowback, finding myself under attack by colleagues in theater journalism who were baffled that anyone could like such an idiosyncratic piece in the heyday of brassy musicals like La Cage aux Folles, which won the Tony Award that year. Sunday in the Park, by the way, didn’t just lose the Tony Award. Its Broadway production failed to repay its cost to investors, and did not have a road tour: It was, by the commercial theater’s standards, a flop. So was Follies, so was Pacific Overtures, so were the original productions of Assassins and Merrily We Roll Along. Yet these and most Sondheim musicals remain in nearly constant repertory today while many of the hits and prize winners of their seasons have faded. That Steve was able to persevere, never for a second compromising his art, despite the many obstacles in his path along the way is a remarkable drama in itself. Some of this strength, too, was handed down by Oscar Hammerstein. In 1947, Rodgers and Hammerstein came forth with a wildly experimental show called Allegro, now little remembered except as one of their rare failures, sandwiched in between Carousel and South Pacific. The 17-year-old Steve was hired as a gofer by the production, giving him the opportunity to witness close up the integrity, stamina and work ethic of his surrogate father as he labored in vain to create something striking and iconoclastic and new in the face of huge commercial pressures and a hostile audience and critical reception.

Another influence that Hammerstein had on Steve also pertains to his character as much as to his work. Hammerstein inculcated in his young student a reverence for the act of teaching itself.

Throughout his career, Steve has been a tireless mentor and cheerleader for countless young artists who have aspired to enter the theater. My own first encounter with Steve, more than 40 years ago, was, as Michael described, the result of a letter he wrote me about a piece I’d written for my college newspaper. His out-of-the-blue intervention was the first encouragement I ever received from any professional writer, let alone an artistic hero, and it proved life-changing. Some 20 years later, after I left criticism and Steve and I could become friends, he proved to be a support, sounding board and inspiration, whether the sphere was writing or life. There are hundreds of stories like this, I suspect, just as there are millions of others whose lives have been affected by hearing, seeing or performing Stephen Sondheim’s work. I am so honored to speak for all of them today as we thank Steve for all he has given us and join The MacDowell Colony in celebrating him as a great American artist unlike any other.