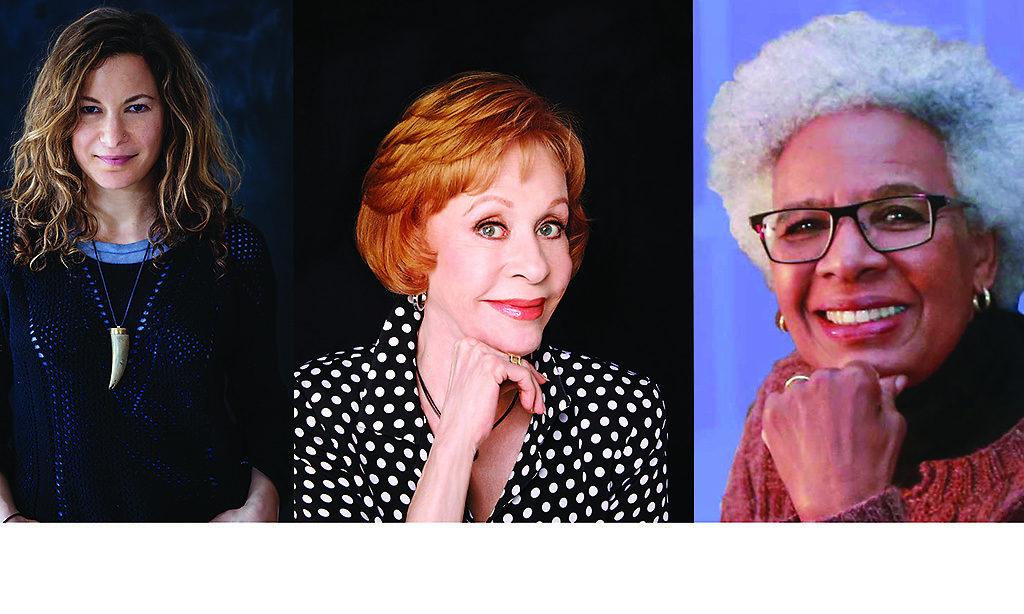 Carol Burnett will appear at MacDowell NYC on Thursday evening, October 24, in an intimate and spirited evening where she will be joined by acclaimed memoirists and MacDowell Fellows Amanda Stern and Nell Painter at MacDowell’s Chelsea loft.

Television icon and author Carol Burnett will appear at MacDowell NYC on Thursday evening, October 24, 2019, where she will be joined by acclaimed memoirists and MacDowell Fellows Amanda Stern and Nell Painter. The three authors will read from their published memoirs and discuss the unique challenges of the popular non-fiction form. MacDowell, one of the nation’s leading contemporary arts organizations, recently opened a new audience engagement space on West 23rd Street.

Burnett, Painter, and Stern have each penned unique memoirs that reflect themes of being outsiders. Stern’s Little Panic: Dispatches from an Anxious Life relates her childhood in Greenwich Village. Painter’s Old In Art School narrates the author’s post retirement return to student life.

Burnett, a beloved actor and iconic public figure, is also a best-selling author. Her memoir One More Time chronicles her growing up in Hollywood with her grandmother and mother. The book served as the basis for the 2002 Broadway play Hollywood Arms, which Burnett co-wrote with her daughter Carrie Hamilton. Burnett’s more recent memoir, Carrie and Me, is a heart-rending account of her relationship with Carrie, who died at the age of 38.

The MacDowell NYC event is a rare opportunity for just 60 audience members to meet the three writers at MacDowell’s intimate Chelsea space and to gain a deeper understanding of what it means to work in this literary genre. The evening serves as a fundraiser, the proceeds of which will directly support artist Fellowships at MacDowell’s New Hampshire campus.

MacDowell NYC is a newly established venue that includes offices, a gallery, and event space for audiences to experience the work created at MacDowell’s 112-year-old New Hampshire campus by the 300 artists granted Fellowships there each year.

“Our New York headquarters features a salon-like gathering space that enables the organization to engage with a range of audience communities and to introduce our artist fellows to the public,” said MacDowell Executive Director Philip Himberg. “An audience of only 60 people, in an atmosphere of open dialogue, will get an in-depth and close-up opportunity to meet MacDowell Fellows and our special guest. There will also be a book signing.”

To reserve a seat, or find out more information, contact: Stacey Bosworth at 212.535.9690 or visit our ticket page.

Carol Burnett is an actress, comedian, singer, and writer, whose career spans seven decades. Best known for The Carol Burnett Show and its 11-year run and 22 Emmys, she is also author of four memoirs, including her 1986 memoir, One More Time: A Memoir, which was a New York Times non-fiction bestseller and adapted – by Burnett and her daughter Carrie Hamilton – into the 2002 play Hollywood Arms. One More Time reveals how Burnett’s financially humble childhood imparted the strength and determination to enter and become successful in the exclusive world of show business. Burnett would later publish Carrie and Me: A Mother-Daughter Love Story, in 2013, which also became a New York Times bestselling memoir.

Nell Painter’s 2018 memoir Old In Art School: A Memoir of Starting Over, was a National Book Critics Circle Finalist and landed on numerous “best of” lists for 2018. She worked on the book in residence at MacDowell in in 2016. After Painter’s retirement from Princeton University where she was the Edwards Professor of American History, she returned to school at Mason Gross School of the Arts at Rutgers University and received a B.F.A. in painting. She then went on to earn an M.F.A. from the prestigious Rhode Island School of Design. Her memoir, Old in Art School, reflects on this experience. Painter is the author of numerous essays, scholarly articles, and books on American and racial history, including The History of White People, published in 2010, which was a New York Times Bestseller.

Amanda Stern’s memoir, Little Panic: Dispatches from an Anxious Life, about growing up anxious, was released in 2018 and came out in paperback last spring. Her fiction and non-fiction work has appeared in The New York Times, The New York Times Magazine, The New York Times Book Review, Filmmaker, The Believer, Salon, and others. Her personal essays have been included in the anthologies Love is a Four Letter Word, The Marijuana Chronicles, and A Velocity of Being, edited by Maria Popova. When she was a senior in high school, Stern co-wrote and starred in an off-Broadway play at the now defunct Kaufmann Theater. Before turning to fiction writing in 1999, Stern worked with filmmakers Hal Hartley, Ang Lee, and Terry Gilliam, and later as a comic, co-hosting the Lorne Michaels' comedy series, "This is Not a Test," alongside Marc Maron. Stern was in residence at MacDowell in 2004 and 2007.

Contemporary for 112 years:
Composer Edward MacDowell and pianist Marian MacDowell, his wife, founded The MacDowell Colony in 1907 to nurture the arts by offering creative individuals of the highest talent an inspiring environment in which to produce enduring works of the imagination. In 1997, MacDowell was honored with the National Medal of the Arts. Each year, MacDowell welcomes more than 300 architects, composers, filmmakers, interdisciplinary artists, theatre artists, visual artists, and writers from across the United States and around the globe. More than 15,000 residencies have been awarded in the last 112 years. Recipients have included Ayad Akhtar, James Baldwin, Ta-Nehisi Coates, Louise Erdrich, Osvaldo Golijov, Cathy Park Hong, Mary Karr, Dee Rees, Vijay Seshadri, Ann Patchett, Colson Whitehead, and Pauli Murray. Pulitzer Prize-winning author Michael Chabon is the chairman of MacDowell’s board of directors.