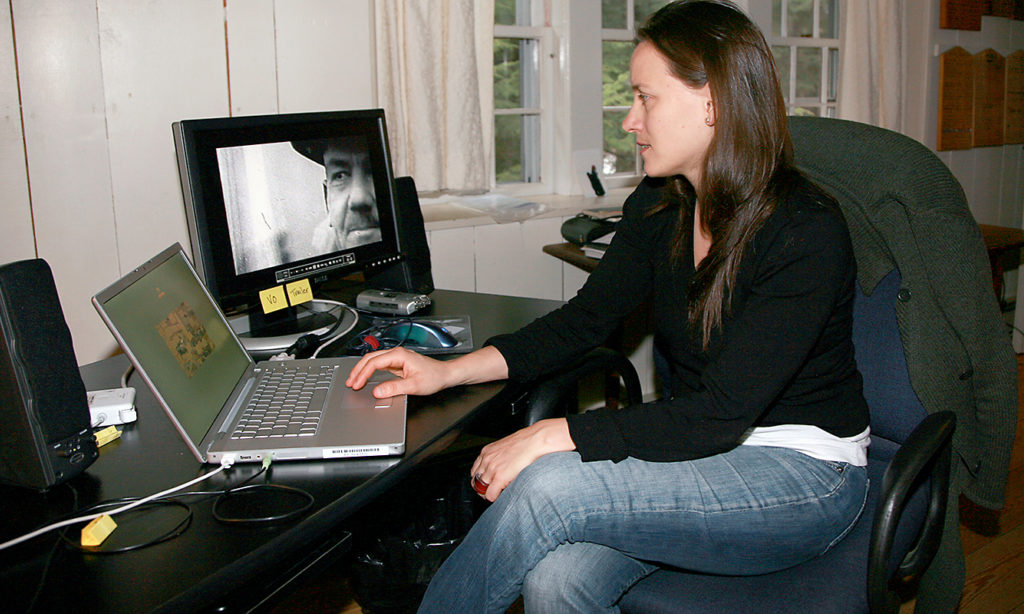 Filmmake Natalia Almada works on edits of her new film in Phi Beta Studio in 2008.

Fellowship is the first designated exclusively to support documentary filmmakers at MacDowell.

FOR IMMEDIATE RELEASE -- February 7, 2011 – The Fledgling Fund Fellowship at The MacDowell Colony has been awarded to documentary filmmaker Natalia Almada for her new work examining the ongoing drug violence in Mexico. Supported by a $10,000 grant from the The Fledgling Fund, the Fellowship provides a MacDowell residency to a documentary filmmaker engaged in innovative work that explores critical social issues and has the potential to inspire change.

At the Colony, Almada will continue to edit and refine her latest project, El Jardin, a portrait of a cemetery in the drug heartland of Mexico. The Fledgling Fund Fellowship is the first designated specifically to support the work of documentary filmmakers at MacDowell. It will cover all costs of Almada’s residency at the Colony, providing the opportunity for her to live and work in an artist studio on MacDowell’s 450 acres in Peterborough, New Hampshire, for up to two months.

“The Fledgling Fund is delighted to support Almada’s residency at MacDowell,” says Sheila Leddy the Fund’s executive director. “We are impressed by her work and look forward to following her progress with El Jardin. It is an important and timely story. We are also pleased to be able to support the mission of MacDowell.”

El Jardin is Almada’s second film examining the local and regional toll of drug violence in Mexico. The first, Al Otro Lado, premiered at the 2008 Whitney Biennial. Since the Mexican war on drugs began in 2007, the cemetery portrayed in El Jardin has doubled in size and the mausoleums have doubled in height, creating a skyline that looks like a surrealist city rather than a resting place for the deceased. In the film, the lives of the cemetery workers and families of the victims — guilty and innocent — intersect in the shadow of this bloody conflict that has claimed nearly 28,000 lives. Almada’s Web site describes El Jardin as “a film about violence without violence.” Almada’s other films include Tribeca Film Festival-winner for best short documentary All Water Has a Perfect Memory and El General, winner of the 2009 Sundance Film Festival U.S. Directing Award.

Almada is the latest of many talented filmmakers whose projects have been supported by The Fledgling Fund, which seeks to improve the lives of vulnerable individuals, families, and communities, by supporting innovative media projects that target entrenched social problems. Lioness — by MacDowell Fellows Meg McLagan and Daria Sommers about the first women in American history to be sent into direct ground combat — received several Fledgling creative media grants. The Fund’s grant program focuses the majority of its resources on outreach and audience engagement for social issue film and media projects that are designed to engage audiences around key social issues.

“I am so pleased that Fledgling is partnering with MacDowell to give filmmakers like Natalia an opportunity to tell their stories and inspire social change,” said Cheryl Young, the Colony’s executive director. “MacDowell is committed to nurturing and promoting documentary film as an art form, and this partnership gives credence to the value that the creative process can have in providing meaningful experiences for artists and audiences worldwide.”

The nation’s leading artist residency program, MacDowell welcomes more than 250 composers, writers, visual artists, architects, playwrights, filmmakers, and interdisciplinary artists from the United States and abroad each year. At the Colony, filmmakers and other artists receive use of a private studio, living accommodations, meals, and the benefits of working in a dynamic multidisciplinary community of fellow artists.

In 1971, MacDowell became one of the first artist residency programs to recognize filmmaking as a separate discipline. Since then, more than 240 directors, screenwriters, and cinematographers have worked at the Colony, including Michael Almereyda, Sharon Greytak, Heiko Kalmbach, Laura Poitras, David Petersen, and Jessica Yu. Films created by Colony Fellows are featured frequently on HBO and PBS’s Independent Lens and P.O.V., and often go on to wide acclaim, winning EMMY, Sundance, and Academy Awards. Annual filmmaking residencies at MacDowell have quadrupled over the past decade, increasing by more than half since 2003.

The Fledgling Fund grant at MacDowell will support the costs of the residency. Through partnerships such as this, the Colony raises critical funds and attracts artists who may not know about residency opportunities. To be selected for The Fledgling Fund Fellowship, a filmmaker must be accepted for a residency at MacDowell by following the standard application process. Details are available at www.macdowellcolony.org/apply.