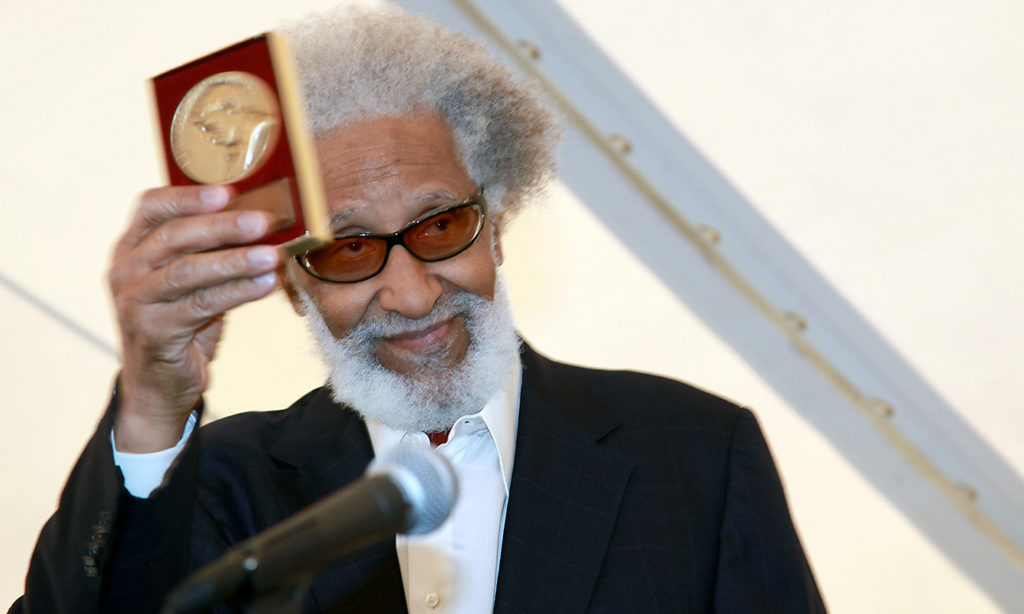 The award will be presented to Rollins in a public ceremony at the Colony in Peterborough, New Hampshire, on Sunday, August 15th.

FOR IMMEDIATE RELEASE -- March 1, 2010 -- The MacDowell Colony, the nation’s leading artist residency program, will present its 51st Edward MacDowell Medal to jazz composer Sonny Rollins on Sunday, August 15th. Since 1960, The MacDowell Medal has been awarded annually to an individual who has made an outstanding contribution to his/her field, and this year marks the first time the Colony has recognized the field of jazz. Rollins joins an impressive list of past recipients, including Leonard Bernstein, Alice Munro, I.M. Pei., Merce Cunningham, and Georgia O’Keeffe.

Beginning at 12:15 p.m., the award ceremony will take place on The MacDowell Colony grounds, which will be open to the public for the festivities and celebration. Robert MacNeil, chairman of The MacDowell Colony, will award the Medal, along with Carter Wiseman, president of the board, and Cheryl Young, executive director. MacDowell Fellow and pre-eminent jazz writer and critic Gary Giddins, this year’s presentation speaker, will introduce Rollins and describe his life and work to the audience.

“I’m proud and pleased to be selected to receive this very special prize,” said Rollins. “Edward MacDowell’s spirit engaged me many years ago when, as a child, I was inspired by his composition To a Wild Rose. Later, I had the opportunity to make it a part of my repertoire, performing it on many occasions and eventually recording it. Somehow I feel I’m getting to meet him again.”

In naming Rollins the 2010 Medalist, Giddins, also the chairman of this year’s Medalist Selection Committee, said, “Much as The MacDowell Colony represents to countless artists a matchless paradise for inspired, uninterrupted creativity, this year's 2 Medalist represents the zenith of his art. Perhaps more than any other artist since World War II, Sonny Rollins has personified the fearless adventure, soul, wit, stubborn individuality, and relentless originality that is jazz at its finest. From the time he began recording, at 19, he was recognized as a major talent; his innovative approach to the tenor saxophone was endlessly copied, and his original compositions frequently adapted. But in jazz, composer and performer are often one and the same, and perhaps his key achievement has been the forging of an improvisational method that has given the idea of theme-and-variations a renewed vitality. His singular music is at once reassuring in its fortitude and daring in its detours. Incapable of faking emotion or settling for rote answers to the challenges of creating music in the moment, he keeps us ever-alert to the power of the present.”

Since the inception of the Edward MacDowell Medal, the Colony has rotated it among its seven artistic disciplines. Rollins is the 14th Medalist in music composition, but the very first in the field of jazz. He follows such luminaries as Aaron Copland, Samuel Barber, Elliott Carter, and Lou Harrison.

Called the “greatest living tenor saxophone player” by The New York Times, Rollins has had a profound impact on music. Born in 1930, he gravitated to the tenor saxophone in high school, inspired by the work of Coleman Hawkins. By the time he graduated, he was already working with such well-known musicians as Bud Powell, Fats Navarro, and Roy Haynes. In 1951, Rollins debuted with Prestige, the record label that produced his classics Worktime and Tenor Madness (with John Coltrane). Five years later, he went out on his own, ushering in a highly creative period that produced the records A Night at the Village Vanguard, Way Out West, and Freedom Suite.

Taking the first of his well-known sabbaticals in 1959 — a period in which he could often be found practicing on the Williamsburg Bridge — Rollins returned to music in 1961 with The Bridge, which featured a collaboration with Hawkins, his longtime idol. In 1966, he received his first GRAMMY nomination for the score he composed for the film Alfie. Rollins’s first GRAMMY win came in 2000 for This Is What I Do; a second followed in 2004 for Without a Song (The 9/11 Concert). In 2005, Rollins formed his own label, Doxy 3 Records, named for the 1954 composition he recorded with Miles Davis. The following year, Doxy Records released Sonny, Please, which was nominated for a GRAMMY for best jazz album.

Rollins has been honored with a lifetime achievement award from the National Academy of Recording Arts and Sciences, and in 2007, he was given the Polar Prize in Music, one of the most prestigious music awards in the world. Other recipients of the Polar Prize include MacDowell Medalist Steve Reich (awarded the prize the same year as Rollins) and Bruce Springsteen. In 2009, Rollins was awarded the Austrian Cross of Honor for Science and Art, given to leading international figures for distinguished achievements. The only other American artists who have received this recognition are Frank Sinatra and Jessye Norman.

“I am convinced that all art has the desire to leave the ordinary,” Rollins said in a recent interview. “But jazz, the world of improvisation, is perhaps the highest, because we do not have the opportunity to make changes. It’s as if we were painting before the public, and the following morning we cannot go back and correct that blue color or change that red. We have to have the blues and reds very well placed before going out to play. So for me, jazz is probably the most demanding art. I believe that jazz is the music which best expresses the stirrings of the human soul.”

Situated on 450 acres of fields and woodland in New Hampshire, The MacDowell Colony welcomes more than 250 composers, writers, visual artists, theatre artists, architects, filmmakers, and interdisciplinary artists from the United States and abroad each year. The sole criterion for acceptance is talent; a panel in each discipline selects Fellows. In 1997, The 4 MacDowell Colony was awarded the National Medal of Arts for “nurturing and inspiring many of this century’s finest artists.”

Following this year’s Medal Day ceremony, guests can enjoy picnic lunches on Colony grounds by bringing their own or by pre-ordering lunch baskets. MacDowell artists-in-residence will then open their studios to the public from 2 p.m. until 5 p.m. There is no charge to attend Medal Day. The MacDowell Colony is grateful for the support of Lincoln Financial Foundation, our Medal Day corporate partner.