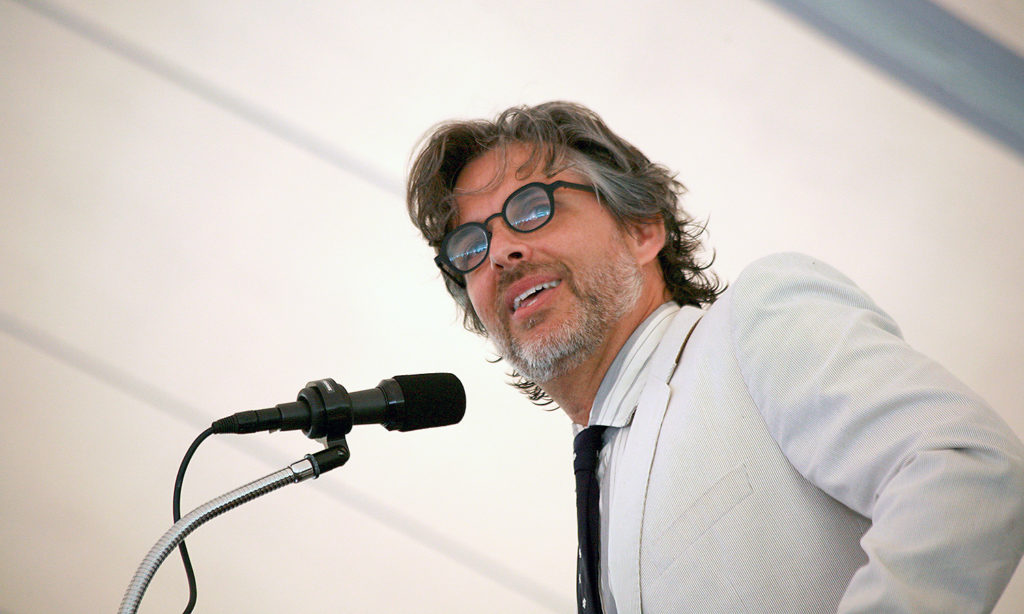 Good afternoon, everyone. Your Excellency, Maggie Hassan, Governor of this great state. We're so honored to have you here, thank you; assorted other dignitaries and potentates; neighbors, friends, and all you raging Sondheimians who have made pilgrimage here today to bask in the radiance of the Master and of this brilliant August afternoon — welcome. I'm Michael Chabon, the Chairman of the Board of the MacDowell Colony, and it is my great honor, for the third time, to preside over the green and festive Granite State mysteries — a MacDowell and a New Hampshire tradition for 53 years — known as Medal Day. In my remarks at my first two Medal Days, as we recognized the accomplishments of those incomparable American artists, Edward Albee and Nan Goldin, I tried to formulate my own assessment of the importance and excitement of the occasion, but today as we prepare to bestow the MacDowell Medal, for the first time, on an artist working in the field of musical theatre, on Stephen Sondheim, an artistic hero of mine since I was 13 years old, words fail me. And so I feel I must quote my august predecessor as Chairman of the Board, Mr. Robert MacNeil, the redoubtable and distinguished novelist, journalist and champion of the English language, and say: Dudes, I am so totally stoked!

So, anyway, tradition. Now, the word tradition derives from a Latin root meaning "to deliver." It bears an underlying sense of seeing something safely to its destination, of ensuring that some precious cargo, having made its perilous way from the past down to the present is, in turn, handed on to the next generation, and to generations yet to come. A tradition, then, is a kind of promise, one that is on a daily basis, like a marriage vow, always being redeemed and renewed in the same breath. In that sense, not just Medal Day but all the work we do here at MacDowell is the work of tradition, because it's our job to ensure, on a daily basis, with every picnic basket packed, with every dollar raised, that Mrs. MacDowell's original promise is kept, that her original vision is delivered, and will go on being delivered for the next 106 years and beyond.

Nothing better symbolizes the kind of promise I'm talking about — a promise, fundamentally, that the collective myths and stories and obsessions and inspirations of human beings have the power to transform the world, that they are worth preserving and conserving and transmitting to the future, that art matters, that words matter, that the things we do here on this damned and beautiful planet matter — than a library. And that's why I'd like to ask you all to look to your left, beyond the next expanse of green — right over there. I invite all of you to stop in and visit our new library, and see for yourself... (not right now, though. I'm still talking.)

With this elegant, splendid and yet haimish structure, architects Tod Williams and Billie Tsien, landscape architects Reed Hilderbrand, builder Tim Groesbeck and our own elegant and splendid Resident Director David Macy have not simply added on to the historic Savidge library. They have, in the truest sense of the word, redeemed it, like a promise, for the sake of future generations of artists, the recipients of our precious cargo: Marion MacDowell's dream, her mad dream of creating a place where artists would be free to deliver up themselves, wholly, to their inspirations and obsessions.

Whoa, I can hear somebody saying, or maybe just thinking it, really, really loud: Now, hold on a second, there, Chairboy. Every year now, at Medal Day, and at the National Benefit, and pretty much every time they stick a damn microphone in your hand, you get up there, and you come out with all this stuff about dreams and promises and myths and truth and fire and the human heart, and you string it all together with ands and no commas... and frankly? To be honest? The whole thing strikes me as being just the tiniest bit, well... foofy?

Okay, that's true. All right? You have a point, O invisible, telepathic accuser, possibly my wife. I have, on occasion — fine, on many occasions — been guilty of romping, with microphone, through untrammeled pastures of foof. But here's the thing. There's a part of art-making that has nothing to do with dreams, or myths, or, God knows, fire. (Fire, as the architecture of that building right over there proves, is something you want to keep at a certain distance, or it's going to burn your library's symbolic ass down.) It's the part of making art that has to do with putting your butt in a chair and keeping it there until you hit your self-assigned word count. It's the part of the process that involves dead ends, mess-ups, going back and starting from the beginning, starting from the middle, starting from the end. Starting anywhere but the place where you've already made such a mess of it. The part where you crumple a mountain of staff paper and wear down your erasers until you're standing in rubber crumbs up to your ankles. The part where you forget what you had in mind when you started, all those long months or years ago, why you ever thought this project would be a good idea, why you ever thought you had what it took to pull it off, and so go to bed in despair; then wake up the next morning and keep going, damn it. The part that studies, that reads the novels, examines the canvasses, analyzes the scores of the masters and hacks alike, devours the work of your influences, rivals, colleagues, the part that learns theory and vocabulary, that knows that the rhetorical device of stringing clauses together with ands and no commas is called "polysyndeton". The part that scorns inspiration as the crutch of dilettantes, knows from bitter experience that last night's rich, bubbling dream is this morning's microwave-Freudian oatmeal, and has thus learned to rely only on practice, habit, hard work, taking pains, on knowing one's medium and tools. I'm talking about the work of art. I'm talking, I suppose, about craft.

Craftsmanship — which I would define, in the context of art, as the compulsive taking of pains — is what makes Stephen Sondheim my hero. And I would argue that it's for the man's painstaking craft, as much as his art — if the two can even be separated out that way, and after more than a quarter-century as a working artist I'm not sure they really can — it's for that that we honor Stephen Sondheim today. Make no mistake — let me be clear — Sondheim is, in my view, among the four or five most consistently, lastingly great American artists of the postwar era, in any discipline. But from the moment I first encountered his work, like many of you, I suppose, in his lyrics for West Side Story, and then when attending the Kennedy Center premiere of Pacific Overtures with my parents in 1976, what struck me most powerfully was the sense of assurance, of confidence, of making it all look so easy. Meter and rhyme, diction and tone, key changes and chord progressions. His work had the kind of easy authority that, I now understand, comes only from hard work, from putting in the hours of practice and study and, most of all, of failure and attempt and failure. It's boring to talk about, and boring to think about, and, at times, it's even more boring to do. And maybe it's because so much of what goes into the making of art is so damn boring that it can sometimes be hard to try to communicate what really goes on here at MacDowell. But more than inspiration, more than creativity or myth or the eternal human spirit or any other kind of foofy thing you want to name, it's in that taking of pains — in affirming the craftsman's simple truth that what is worth doing is worth doing well — that you will find the root of art's power to affirm, in the face of so much dark and brutal evidence to the contrary, that life matters, that we matter, that anything worth doing well is, after all, simply worth doing.