Michael Chabon on the Power of Art in Troubling Times 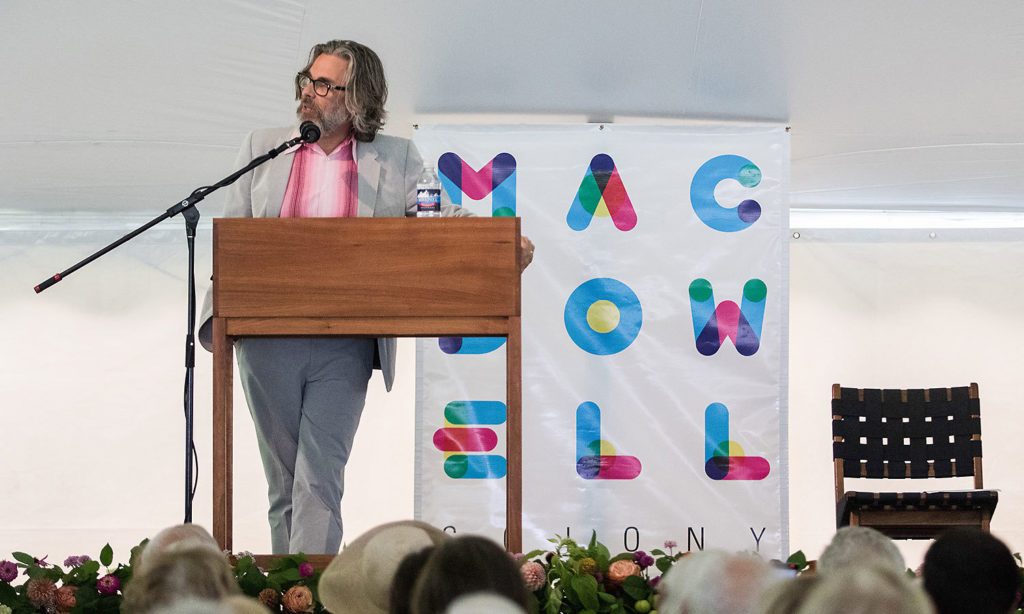 Transcript: Chairman of the Board welcomes the Medal Day 2019 crowd to celebration of 60th Edward MacDowell Medal being bestowed upon Charles Gaines.

I would like to begin today, as I did last year, by acknowledging that we have gathered on the traditional lands of the Abenaki People, who lived in this area for at least 13,000 years before the arrival of all those murderers, rapists, and vermin from what were at the time, by all accounts, the quite literally shithole countries of Europe.

I would also like to acknowledge the loss, on August 5, of our 2016 Medalist, Toni Morrison. There’s not much I can add to things people have said and written, before and since her death, about her importance and worth as a writer, the pain and terrible beauty of the worlds she imagined and of the world her words obliged us to see. I’ll just say that those of you who were here three years ago remember the radiance and wit and insight that emanated from this stage when she stood at this podium and lifted our spirits.

The last thing I want to acknowledge, and to ask your indulgence today to dwell on for a bit, is that this, my ninth, will be the last time I have the profound honor and good fortune to preside over Medal Day as Chairman of MacDowell’s Board of Directors. It’s time for somebody else to sit in the chair. As of Spring 2020, I will be stepping down.

When I took this position, nine years ago, Barack Obama was the President of the United States, Donald Trump was facing the imminent collapse of his financial empire, and Prince, David Bowie, Leonard Nimoy, Nora Ephron, Ursula K. LeGuin, Philip Roth, Gene Wilder, Muhammad Ali, Amy Winehouse, Elmore Leonard, Alan Rickman, and my father were still with us, just to mention the people who meant a lot to me. Along with Book Court bookstore in Brooklyn, Saab automobiles, RadioShack, and, apparently, common decency.

These feel like such dire times, times of violence and dislocation, schism, paranoia, and the earth-scorching politics of fear. Babies have iPads, and the icecaps are melting, and your refrigerator is eavesdropping on your lovemaking (and frankly it’s not impressed).

Fascists, bigots, and guys who plan to name their sons Adolf wake up every day with a hateful leer on their faces and the Horst Wessel song in their hearts – if you’re an ignorant, misogynist, xenophobic, anti-science racist, I guess times have never felt better. But for the vast rest of us – and please know, please believe, you and I greatly outnumber them. For the rest of us things can seem so much worse than they did back in 2010, when a decent, thoughtful, level-headed, rational and humane Black man was living in the White House.

It has all seemed to fall apart so quickly. Looking around, it’s hard not to wonder who or what is to blame. I think it might be me. No, hear me out.

Some people might respond, and they might be correct, that with the possible exception of the sudden imminence of planet-wide ecological catastrophe, things have not actually gotten worse. America, these people might say, has always been a dire and violent place, founded in schism, built on the backs of enslaved people, expanded through genocide, suckled on xenophobia, and not so much rife with as addicted to paranoia. These are the folks who on the morning of November 9, 2016 looked at the people freaking out all around them and said, Well, duh.

Other people might be inclined to lay the blame for this precipitous decline, for its intensification, for the sudden strange and dismaying public permissibility of callousness, chauvinism, cruelty, barbarity, and philistinism, squarely in the lap of the current occupant at 1600 Pennsylvania Avenue. I’ve entertained that argument, and God knows I’d rather think it’s him than me.

Then there are those who point to the Large Hadron Collider in Switzerland, where at some point in the last decade a hole was opened in the fabric of reality, according to this theory – perhaps just as an episode of The Apprentice was airing – and we and all our aspirations and humanist agendas fell into it, finding ourselves in this mirror universe where America has decided its proper business is to imprison babies and the presidency is conducted on Twitter by a man whose execrable spelling is only the least of the ten thousand things that do not, inexplicably, cause him to feel shame.

But I don’t know guys. I came in here nine years ago so full of fire and fervor and belief in the power of art, and hence of the MacDowell Colony, to change the world – I meant for the better. I even came up with a catchy slogan for us, back then, that reflected this belief. It went like this: MacDowell makes a place in the world for artists, because art makes the world a better place. It turned out to be one of those catchy slogans that’s so catchy no one can actually remember it, and it never really caught on, but I meant every strangely forgettable word of it.

And over the past nine years, we went at it, here at The MacDowell Colony. My friends, let me assure you, for I witnessed it with my own eyes, the board and the staff of The MacDowell Colony (both here and in New York City) worked their asses off. We made a place for some 3,000 artists, over that period, and fed them some 10,000 meals, and cleaned up after them, and threw parties and hectored donors and hit up foundations to raise the money it took to pay for all that. I – me – a quiet, solitary, covertly shy avoider of social gatherings and all interactions requiring asking anyone for anything – hosted and emceed those parties, and went around deeply mortified with my hand out, and wrote many letters to strange and inaccessible tycoons or the foundations they established, laying bare my love of MacDowell for them and all the world to see.

Over those nine years we told every single one of those three thousand artists, sincerely, that we thought they were awesome, and that their work was amazing and important. We bestowed on them, with eagerness and reverence, our sacred gifts of time and space. We kept the Internet at bay. We kept their friends and families at bay. We kept the world at bay, so that when their time here was up, they would return to that world fortified, in fuller possession of an authentic vision, and maybe even with a little bit of swagger in their souls.

And they put forth that vision, with their art. They published novels and showed in galleries and opened plays. Their operas were performed, and their poems collected. Their buildings opened to the public. The novels broke hearts, and the poems won prizes, and the paintings found their ways onto the walls of museums and of collectors, where they were free to exercise their improving influence on people whose means and position enabled them, in turn, to lift the levers and turn the dials of power, the power to change the world for the better.

And yet here we are, nine years into my tenure, and not only is the world not a better place – it has, in so many ways, gotten so much worse. Things really were looking up, back in 2010, and then I came along, and stepped into Robin McNeil’s brogues, and even though MacDowell’s staff and its board and the Fellows kept on doing all those things they had been doing for the previous hundred and three years, it all went to hell in a handbasket, or a lunch basket.

I mean, really, what other conclusion is there? I’m sorry. Don’t hate me. I tried.

Or – I wonder if it’s possible that I was wrong, that I’ve always been wrong, that art has no power at all over the world and its brutalities, over the minds that conceive them and the systems that institutionalize them. Those folks I cited earlier, the ones who offer their grim reassurances that the world has always sucked as much as it does now, in particular for women, the poor, the disenfranchised, the enslaved and downtrodden, and exploited, these folks might point out that art and misery have coexisted for the whole span of human existence on Earth, and suggest that perhaps the time to abandon hope for the redemptive power of art is long overdue.

Maybe the world in its violent turning is too strong for art. Maybe art is a kind of winning streak, a hot hand at the table, articulating a vision of truth and possibility that while real simply cannot endure. Over time the odds grind you down, and in the end the house always wins.

Or maybe the purpose of art, the blessing of art, has nothing to do with improvement, with amelioration, with making this heartbreaking world, this savage and dopey nation, a better place. Maybe art just makes the whole depressing thing more bearable. I don’t mean that we should think of art solely as offering a kind of escape or refuge from the grim reality of reality, though personally I can’t think of higher praise. To experience the truth of art, the truth in art, reminds us and reassures us, in this kingdom of lies, of deep fakes and disinformation, that there is such a thing as truth. Truth lives. It can be found. And there is no encounter more powerful than the encounter between the slashing, momentary blade of truth and a lie-entangled mind.

And what is that truth, the truth of art, that freeing blade, that slaking drink in the desert of the world? It’s this: I am not I, you are not you. We are we. Art bridges the lonely islands of our subjectivities. It’s the string that hums from my tin can, over here looking out of my little window, to you over there, looking out of yours. All the world’s power to hold us back and keep us down lies in its ability to persuade us that we are powerless to understand each other, to feel and see and love each other, and that therefore it is pointless for us to try. Art knows better, which is why the world tries so hard to make art impossible, to immiserate artists, to ban their work, silence their voices, and why it’s so important for all of us to support MacDowell in its work which is, quite simply: to make art possible.

Hey, maybe that would make a good slogan.

Well, I don’t know about you, but I feel a little better than I did when I started. The hell with fascism. The hell with bigotry and paranoia. The hell with fools falling for the lies of charlatans; that’s what fools do. And we’re just going to keep on doing what we do, here at MacDowell: housing and feeding the people who never stop fighting to remind us that we are in this together, each only one poem, one painting, one song away from another mind, another heart, another life. It’s tragic that we need so much reminding, and magic that we have, in art, the power to keep on making it happen.