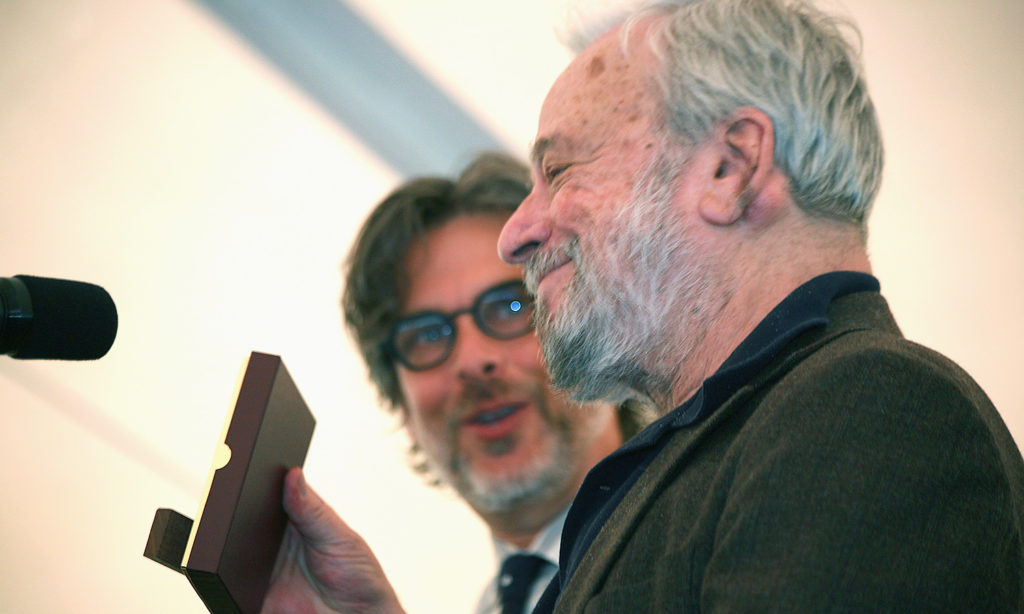 That’s the trouble with Awards for a body of work. They always come at both a good time and a wrong time: good because they tell you that what you’ve been doing was worth the doing, and wrong because they ought to come when you’re young and excited and hungry for assurance that what you’re doing is worth the doing. One of the problems of getting Awards when you’re established is that you start to believe your notices. Too much recognition can curb the appetite and venerability can kill it. Not if you’re Picasso or Stravinsky, of course – nothing could slow them down. But to live that long and still be that hungry to explore and keep exploring is what separates the geniuses from the gifted.

Still, although I may be among the oldest of the Medalists, I take genuine pride in being the first to represent the former runt of the arts: musical comedy. Yes, I mean musical comedy, not musical theater. Musical comedy became musical theater only recently – “recently” in the larger scheme of things, meaning over the last few decades. The transformation became certified when Institutions of Higher Learning began offering courses in the subject. And I don’t mean those hyper-contemporary institutions, which offer such specialized subjects as contract bridge and water-skiing (I kid you not, my half-brother went to one). No, I mean respectable, not to say venerable, centers of education like Yale and Princeton and Dartmouth and Northwestern, which not only offer courses but have entire departments devoted to musical theater. The geniuses of musical comedy like Cole Porter and Irving Berlin and the Gershwins (to them, Porgy and Bess was an opera, not a musical) would probably have chuckled or even guffawed at the notion of their product being taken so seriously.

It was Oscar Hammerstein, of course, who kick-started the whole thing, first with Jerome Kern and Show Boat and subsequently with Richard Rodgers and Oklahoma!, Carousel and the like. By the time he got finished with it, musical comedy had become musical theater. It got further refined by the next generation: Lerner and Loewe and Frank Loesser in particular. But it was my generation – writers like Bock and Harnick and Kander and Ebb – who turned it into what is now considered an art form – enough of an art form to be included in college curriculums, at any rate. And there are many people who haven’t forgiven us.

The fact is that today musicals, as I prefer to call them in order to avoid any discussions of pretentiousness or coyness categorizing them, especially the musicals that originate off-Broadway and in regional theaters, have as much variety and vitality as straight plays do. This is both a happy fact and a sad one – happy because they do have such variety and vitality and sad because they’ve taken over the commercial theater like kudzu. Nowadays, few plays make enough money to sustain the playwrights who write them. Robert Anderson, one of the playwrights who was able to sustain himself during a long career (although he had to resort to screenwriting every now and then) purportedly said that in the theater you can make a killing, but you can’t make a living. Today, that is true only of people who write musicals. The era of the blockbuster Neil Simon hit is over, with rare exceptions like War Horse – which is more like a musical than a play, anyway.

I’ve never visited the MacDowell Colony before, and seeing it now, that is something I regret. But I do have a tenuous connection to it, or at least to its founder. When I was eleven years old, I was enrolled at New York Military Academy, not because I wanted an Army career but because that’s where baffled children of recently divorced upper middle class parents were sent while the parents tried to straighten out their lives. To my surprise, and perhaps to yours, I enjoyed the school very much, not least because in the assembly hall was the second largest pipe organ in New York State, surpassed only by the one at Radio City Music Hall, but still bigger than the one at the Roxy. It wasn’t the instrument that got me (I don’t much like the sound of the organ), it was the four different manuals and the dazzling colored tabs for the stops – dozens of them to press in myriad combinations. And then there were the pedals, on which you could dance and make different sounds, even though my legs could barely touch them.

Anyway, the first piece I learned was MacDowell’s most famous melody, “To a Wild Rose,” which I loved not because it was so beautiful but because it was easy to play, being very slow and consisting mostly of sustained chords, which allowed me to experiment with every stop I could get to, often from bar to bar, creating a crazy quilt of varying timbres and dynamics. This began my interest in MacDowell’s music and later, when I took piano lessons, I worked my way up to, but not through, the Piano Sonatas – they were really difficult, and I couldn’t find any recordings to guide me. I did find a recording of the 2nd Piano Concerto, however – in my teens, I collected classical 78s, the rarer the better, and the Piano Concerto was rare indeed. I think I paid at least five times the retail price for it, but I liked the music, because it reminded me of Rachmaninoff, whose music I adored. I think MacDowell did, too.

One final observation: As most of you probably know, there is a cycle of rotation among three primary disciplines involved in the awarding of the MacDowell Medal: one year a writer, the next a composer, the next a visual artist, and so forth, the rhythm occasionally interrupted by a filmmaker or a choreographer. A new category was introduced in 2003, when Merce Cunningham received the Medal for Interdisciplinary Art, because his work comprised both musical and visual ideas in collaboration with other artists.

Well, perhaps this Medal should be for Interdisciplinary Art too, then, because I do not write alone, I’m a collaborator. Collaboration is the lifeblood of musicals – the collaboration between the songwriters, if there are more than one, and the librettists, if there are more than one. Traditionally, this has been less important to opera, where music is the driving force and the libretto is subordinate to it. In the kind of musicals which Oscar pioneered and which have been the standard ever since, no matter how experimental some of them have become, the reverse is the case: the libretto is the engine and the songs arise from it and are enhanced, or sometimes made to look foolish, by it.

Interdisciplinary or no, this Medal is for Musical Theater. I’d like to accept it on behalf of Oscar and all his descendants who made the category possible – including, I have to say, myself. Thank you.