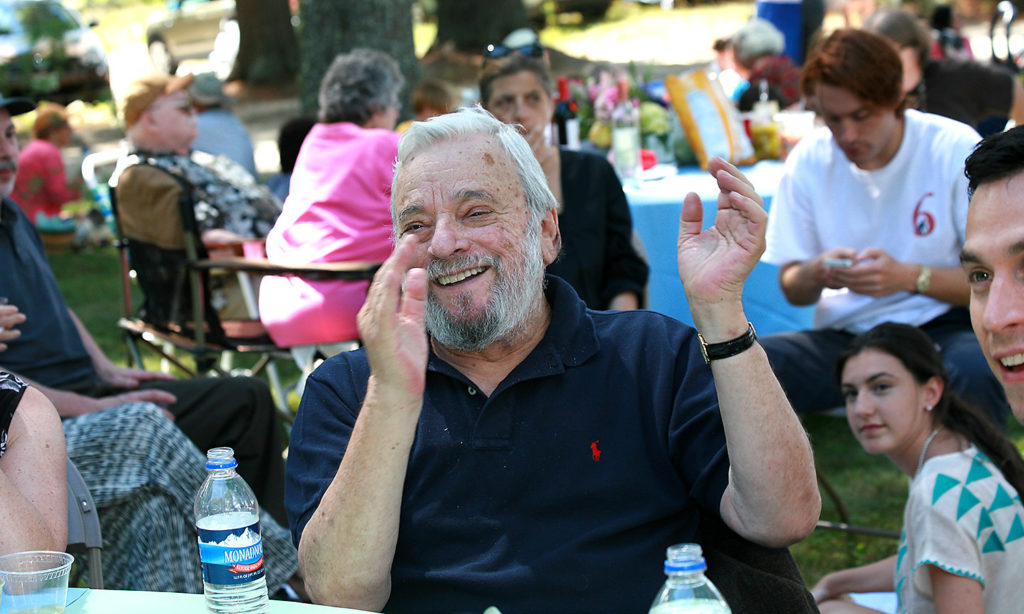 Medalist Stephen Sondheim reacts to a performance of one of his songs. (Joanna Eldredge Morrissey photo)

New Hampshire governor among one of largest Medal Day crowds ever to see musical theatre legend honored at The MacDowell Colony.

Stephen Sondheim told some 2,200 gathered at The MacDowell Colony on August 11 that he was “not only humbled and privileged, but astonished” at being in the same company as others who have won the Edward MacDowell Medal. During the Medal Day ceremony, he joked about being the third oldest recipient, behind Chuck Jones and Georgia O’Keeffe and then noted that awards for a body of work “come at both a good time and a wrong time. Good because they tell you that what you’ve been doing is worth the doing, and wrong because they ought to come when you’re young and excited and hungry for assurance that what you’re doing is worth the doing.”

“I take genuine pride in being the first to represent the former runt of the arts, musical comedy,” said Sondheim, composer and lyricist of such titles as Sweeney Todd (1979), Sunday In The Park With George (1984), Into the Woods (1987), and Assassins (1991). He noted that musical comedy had only become elevated to musical theatre in the last few decades, and then only after Oscar Hammerstein II “kick-started the whole thing.”

MacDowell Colony Chairman and author Michael Chabon presented the 54th Edward MacDowell Medal to Sondheim, saying, “Sondheim is, in my view, among the four or five most consistently, lastingly great American artists of the postwar era, in any discipline.” The gathered crowd, which included New Hampshire Governor Maggie Hassan, responded with enthusiastic applause.

This year marks the first time a luminary has been chosen from the realm of musical theatre.

“This is overdue, not only because of his extraordinary and still ongoing career, but also because musical theatre is America’s one major indigenous art form,” said Rich, chairman of the Edward MacDowell Medal Selection Committee, in his remarks introducing Sondheim. “But you have to wonder where the American musical would be today without Stephen Sondheim. The chronicle of the modern musical runs less than a century, and Steve’s contributions have defined and dominated more than half of that span.”

Rich, who was The New York Times’ chief drama critic from 1980 to 1993, went on to say that the “theatrical revolution” that was solidified by Sondheim’s mentor, Hammerstein, was handed off to Sondheim, who “kept pushing the boundaries of the musical.… This required not just talent and craft, but courage.”

Though Sondheim’s career was just blooming at a time when musicals were becoming more and more difficult to produce, Sondheim never pandered to the marketplace, Rich said. “That Steve was able to persevere, never for a second compromising his art, despite the many obstacles in his path along the way is a remarkable drama in itself,” he said.

The annual Medal Day celebration featured a picnic lunch on Colony grounds after the ceremony and “pop-up” performances of songs from the works of Sondheim by several community theatre groups, including the Peterborough Players interns, Monadnock Chorus Chamber Singers, and the Cecilia Ensemble of the Grand Monadnock Youth Choir. These performances were staggered throughout the afternoon, occurring in the lunch line while guests were picking up their picnic baskets, along the colony paths to artists’ studios, and at the MacDowell Colony’s new library.

Guests visited the 32 artists’ studios after lunch to get a first-hand look at what artists in residence were working on and had their first opportunity to tour the modern granite and glass extension of the now renovated Eugene Coleman Savidge Library. Designed by internationally renowned architects Tod Williams and Billie Tsien of New York, the 2,900 square-foot structure complements historic Savidge Library and is already in use by artists-in-residence who find the new space supportive of collaboration and web-based art making, especially among multidisciplinary artists. Technological advances within the new building will allow Fellows to interact with and draw inspiration from a digital archive of visual arts, music and videos.

After explaining to the crowd that Edward MacDowell’s “To a Wild Rose” was the first piano piece he learned as a child and came to love “because it was so easy to play,” Sondheim said that he essentially does “not write alone, I’m a collaborator. Collaboration is the lifeblood of musicals.” Speaking of Hammerstein, he accepted the honor of being awarded the medal “on behalf of Oscar and all his descendants who made the category possible, including, I have to say, myself.”