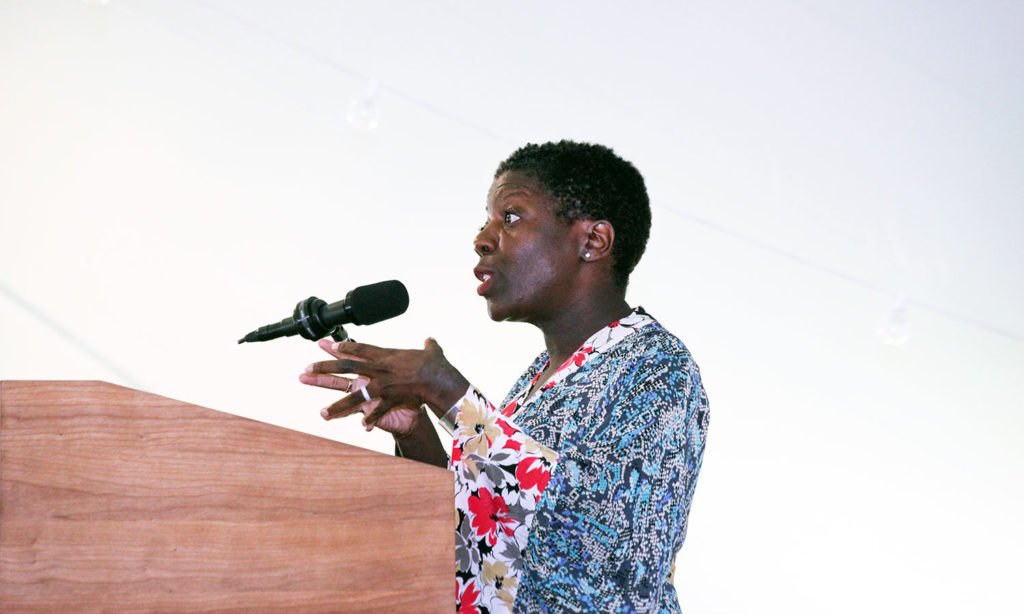 You know, I didn't realize until just this afternoon – earlier when we were taking photographs – how much this place also resonates with my own path, the path that got me to be standing here today. As we stood in the James Baldwin library and I looked at the portrait by Buford Delaney, it made me realize that today, in many ways, I get to stand in honor and gratitude of my teachers. It would begin with a former Medalist who's been invoked today and I will invoke again, Toni Morrison – whose work I came to as a very young woman. A 13-year-old. It truly set my path. It gave voice for who I was and what the possibilities were in a world made possible through her language. Then, as a college student, when I had the great privilege at Smith College of being James Baldwin’s student at the end of his life. As my teacher, he said to me over and over again, the name Buford Delaney. In many ways, him saying that was him giving me my charge. The charge to be a steward for the work of black artists as he had been a friend to Buford Delaney. And then to be here today to honor Charles Gaines, also a teacher, someone who's created a path, makes this very, very, very special

This fantastic medal stands apart in its sense of being so singularly focused on supporting artists, and in its history giving such a deep meaning to the idea of the contributions of artists. I'm very grateful to the Board of the Colony and this year's selection panel for their decision to recognize the many, many achievements of Charles Gaines. You have welcomed him into this pantheon of musicians and composers and writers and architects and visual artists, ranging from Aaron Copland to Sonny Rollins, to Toni Morrison, Marianne Moore, Alexander Calder, Louise Nevelson, and recently also Betye Saar. It is all the more moving for me to be called on to present this medal because it gives me a chance to tell you all how Charles Gaines changed my own life.

You see, I felt Charles's impact well before I had the opportunity to meet him. I knew of his brilliance and daring in the art that he created – work that set him apart in the ’70s when he was bending conceptualism to striking new purposes. He was creating new languages in visuals and in form to speak to the broad questions that art can answer. But I also knew of him because of the great inspiration he gave to others, being an artist who was so deeply committed to other artists as a friend, as a peer, and as a teacher.

His work is in fact a crucial bridge between the first generation of conceptualists in the ’60s and ’70s and the many artists who have emerged in the generations since. And when I realized that I spoke so much to an idea of who Charles was before I knew him, it is because he was so influential on the generation of artists who I had the pleasure to curate in early ’90s.

Now, of course, this was not it literally, though it should have been. That would have been the easy way to answer the question. But they always answered the question with a full sense of the possibility that they had gotten from Charles, through his example, through him as a teacher, and through the great example of the rigor of his work. This was made so clear to me because of the way in which these artists took from Charles this imagining of what pure and clear artistic vision and power could be. He stood as an example – an incomparable one – that fed them all. So that those questions that were asked were all answered for us all in this vast example of Charles's work.

Charles began teaching in the late ’60s and moved to the West Coast where a large part of his career was spent between California State University and Cal Arts. In those two places, and along the way, he impacted so many. But it was also during this time that his work was being shown in museums and exhibitions and galleries all around the world. I think it’s interesting to consider that Charles had an early exhibition in 1972 at the Cinqué Gallery, an institution tied to the Studio Museum in Harlem. But he also showed in the very prescient 1975 Biennial at The Whitney Museum of American Art. The work went on to group exhibitions through the ’90s and into the 2000s, including the 2007 Venice Biennale, the 2011 “Pacific Standard Time.” In 2012, Kelly Jones’s “Now Dig This” and also “Blues for Smoke,” and of course in the 2015 Venice Biennale curated by our late friend and colleague Okwui Enwezor. Just this year. His work was included in the wonderful “Solidarity in Solitary” of the Joyner/Giuffrida Collection at the Smart Museum. And in 2014, we were thrilled to present an exhibition of Charles's work at the Studio Museum in Harlem called “Grid Work,” which also traveled to the Hammer Museum at UCLA.

But that career that is made of the teaching, but also the presentation of work, really came to me fully in the relationship that I had with Charles when I finally got to meet him in 1993. He asked me to participate in a round-table discussion organized around an exhibition, a ground-breaking exhibition, he curated at UC Irvine. It was titled, “The Theater of Refusal: Black Art and Mainstream Criticism.” Everything at that occasion hit me with the force of revelation. The works on view in the exhibition, the views that were being expressed by all involved, and by Charles himself. He challenged, through the incredible capacious quality of his mind and the rigor of his thought and the imagining of the way in which he understood art’s possibility – that for me and all of us gathered – was truly life-changing. What Charles was proposing that day as he has throughout his career was a more complex conversation with new and multi-layered terms that upended any sense of the possibility of the narrow dialogues of any moment.

Let me say this clearly when I stand here, I'm one of many for whom our work would not be possible without the path – the very wide path, this generous path – that Charles has created for so many. Since then, I’ve been delighted to work with Charles and consider him a colleague and a friend. As such I feel ever grateful for the way in which, when I am asked always in my role as the director of the Studio Museum in Harlem, to speak to ‘what is the need for art?’ I understand that necessity when I look across the space of Charles's career; when I see the way, through his work, that he has given us a way to understand our time and place in history and ideas. He does this through systems – and we know that Charles loves systems – and in the ways that he has created these systems. He allows us, through the visual, but also because he is an artist who works from the intellect, and is an artist who comes to his work with a great amount of love and a deep, deep, deep abiding spirit.

I acknowledge that this is why his influence is so great. An influence on art but also an influence on culture in and of itself. Now, it would be hard to stand here and only talk about Charles as an artist because to understand Charles Gaines is to also understand the multi-talented nature of Charles as an artist, a thinker, a writer, a composer, a musician, a tennis player, and the many other skills that he brings with his sense of seriousness. So in bestowing him this medal, what I know MacDowell is saying is what many of us have known all along. It’s that in this example of Charles, what we have is an artist who not only leaves us with this incredible legacy which continues in the work that he makes in these objects, but through the ideas that he has created. Through the ideas that he's changed. Through the spaces that he's opened up. The possibilities he has created.

I stand as one of many who are incredibly grateful to him for what that has meant. My understanding of the world, my understanding of my world, my understanding of my role, of art, and the possibility of artists, is made deeper and richer through this engagement – through the way in which Charles looks at the world. It's in this spirit of knowing him and understanding him that has enabled me to cherish this work and to see it as what I know as a curator and the director of the museum responsible for stewarding the work of artists for generations to come, that makes him also a part of what is so lovely and amazing about this community that cherishes artists and creates space for them to work. Charles has changed the world as I've seen it. For those of you who have this opportunity to experience his work here, I also encourage you to experience it in the many ways it manifests in the world. I know you will join me in the gratitude for him, for his life, for his work, and for his presence. Join me as I am thrilled to be here today as he receives this fantastic and amazing and so well-deserved honor. Thank you, Charles.