Who Is Pauli Murray? 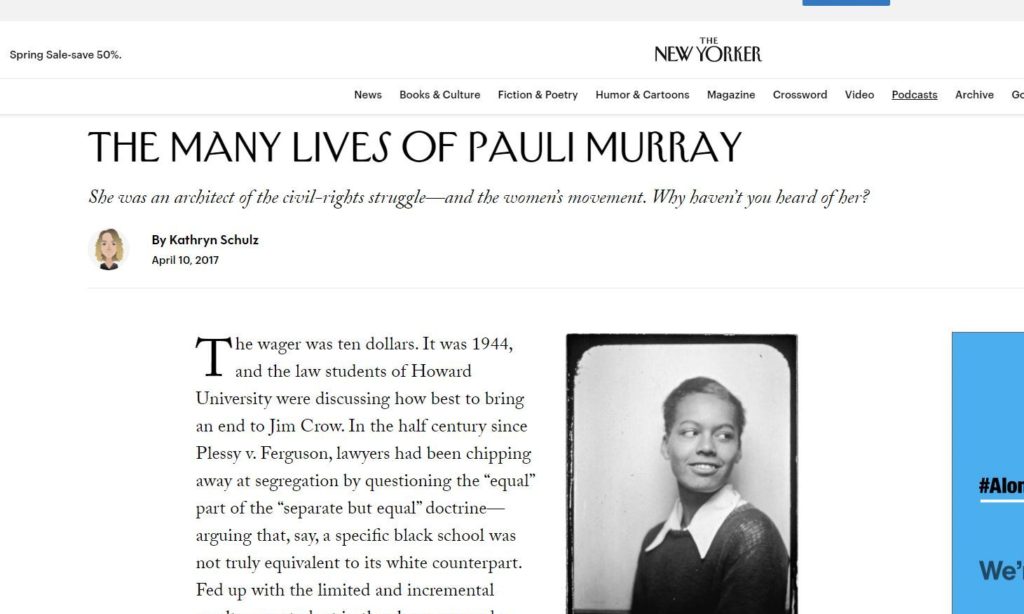 Pauli Murray (1910-1985) was an American civil rights activist, women's rights activist, lawyer, Episcopal priest, and author. She was raised mostly by her maternal grandparents in Durham, North Carolina. At the age of 16, she moved to New York to enroll in an all-white high school so she could satisfy academic and residency requirements to attend Hunter College for free, and graduated with a B.A. in English in 1933. In 1940, Murray sat in the whites-only section of a Virginia bus with a friend, and they were arrested for violating state segregation laws. This incident, and her subsequent involvement with the socialist Workers' Defense League, led her to pursue her career goal of working as a civil rights lawyer. She enrolled in the law school at Howard University, where she also became aware of sexism. She called it "Jane Crow," alluding to the Jim Crow laws that enforced racial segregation in the South. Murray graduated first in her class, but she was denied the chance to do post-graduate work at Harvard University because of her gender.

As a lawyer, Murray argued for civil rights and women's rights. NAACP Chief Counsel Thurgood Marshall called Murray's 1950 book, States' Laws on Race and Color, the "bible" of the civil rights movement. At MacDowell in the early 1950s, with luminaries like James Baldwin and Milton Avery, Murray worked on her book about her family history, Proud Shoes: The Story of an American Family., That book is the basis of an exhibition at The National Museum of African American History and Culture opened an exhibition Pauli Murray’s Proud Shoes: A Classic in African American Genealogy.

She earned a master's degree in law at University of California, Berkeley, and in 1965 she became the first African American to receive a Doctor of Juridical Science degree from Yale Law School. Murray served on the 1961–1963 Presidential Commission on the Status of Women, appointed by President John F. Kennedy. In 1966 she was a co-founder of the National Organization for Women. Ruth Bader Ginsburg named Murray a coauthor of a brief on the 1971 case Reed v. Reed in recognition of her pioneering work on gender discrimination, which articulated the "failure of the courts to recognize sex discrimination for what it is and its common features with other types of arbitrary discrimination."

She left academia in 1973, and in 1977 Murray became the first black woman to be ordained as an Episcopal priest and she was among the first group of women to become priests in that church. She held faculty or administrative positions at the Ghana School of Law, Benedict College, and Brandeis University.

Portrait by Florence Goldman of Peterborough

Youngstown Studio was given to MacDowell by friends of Miss Myra McKeown in Youngstown, OH, where she promoted both art and music. It was renamed Irving Fine Studio in 1972 in honor of Irving Fine, a distinguished composer, conductor, and teacher who was a MacDowell Fellow during the 1940s and 1950s. The simple interior of the studio…