92Y and MacDowell Team Up for Discussion on Women, Art & Identity 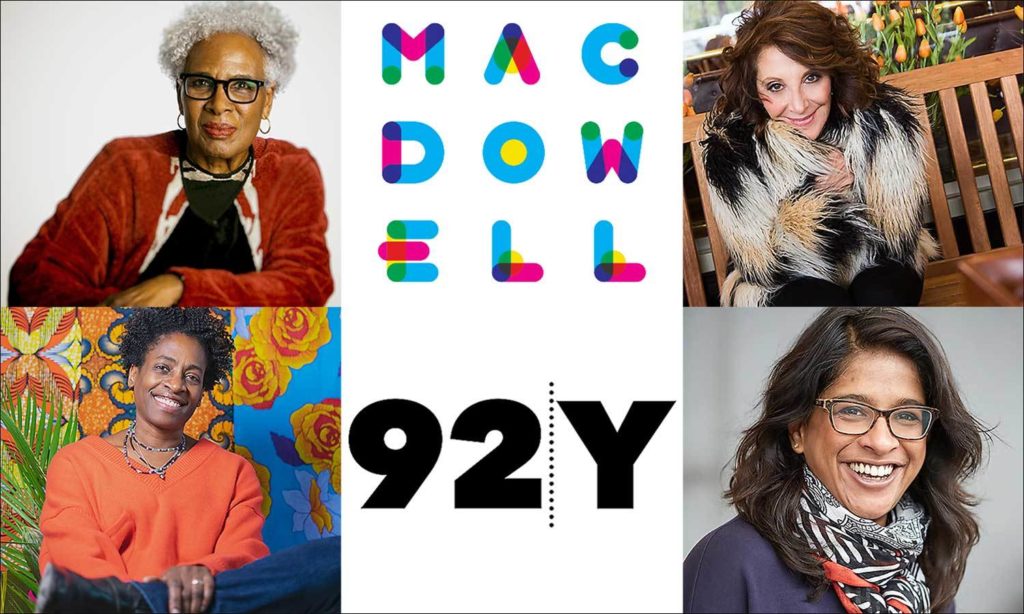 A Conversation on the Enactment of Identity: Andrea Martin, Indhu Rubasingham and Jacqueline Woodson speak to Nell Painter with both humor and candor

December 2, 2020 – New York – Historian, author, visual artist, and MacDowell Board Chair Nell Painter will lead a discussion on Wednesday, December 16, at 6 p.m. with actor and writer Andrea Martin, theatre director Indhu Rubasingham, and author Jacqueline Woodson about the relationship between their identities and their art. They'll further reflect on the barriers that artists face when telling the stories that are traditionally left untold.

As she approaches her first anniversary at the helm of MacDowell’s Board of Directors, Painter is looking forward to expanding the dialog about the importance of art for our current historical moment and the role of artists in a changing world. Reflecting on the period during which she is completing her first year as Madam Chairman of the Board, Painter said, "A year of social justice activism, pandemic, and complex politics has made MacDowell's support of artists all the more crucial. We embrace the challenges of our times as extraordinary opportunities."

“A Conversation on the Enactment of Identity” will be a discussion led by Painter about creativity and its social and historical importance, especially in today’s world. "How do these artists – a lauded novelist, theatre director, and actor – interpret the relationship between their personal lives and the art they generate?” asks Painter. “Individual experience doubtless nourishes art, even as art is creation, not a reenactment of life. This conversation probes that relationship, as both something to exploit and something to avoid."

The free evening, tackling everything from racial inequities in artistic representation to the importance of hair styling and color, will be presented jointly by the 92nd Street Y, New York’s world-class cultural and community center, and MacDowell, the nation’s oldest contemporary arts residency program. MacDowell, celebrating 113 years of fueling contemporary artistic expression, offers Fellowships to artists working in all disciplines.

Register for this free event.

The four artists will share their insight on creativity and culture, delving into questions such as what does interpreting or enacting oneself mean, how does an artist envision or interpret characters’ identities, and which identities are more likely to have their stories told in the current cultural climate?

The intimate event will deliver a front row seat to the type of unscripted, interdisciplinary discussions that often happened between MacDowell fellows before the pandemic, and will occur again when it is over. Our Fellows often tell us that these conversations are a cherished and essential component of the MacDowell experience.

Nell Painter
After a fulfilling career as a publishing Princeton historian (most notably as the author of The History of White People), Nell Painter began again in art school, a move eliciting a great deal of curiosity. In residence at MacDowell in 2016, she completed a memoir entitled Old in Art School, which was a finalist for the National Book Critics Circle autobiography award. In 2017 she completed the series "You Say This Can't Really Be America" and in 2018 she published an art review of Soul of a Nation: Art in the Age of Black Power in the New York Review Daily. In residence at MacDowell in 2019, Painter created "Ancient Hair Book" and four installations on her studio wall for a project that will ultimately become an artist's book with the working title Were the Ancients White? Painter was appointed Chairman of the Board of Directors of MacDowell in 2020.

Indhu Rubasingham
Indhu Rubasingham is the Artistic Director of Kiln Theatre. Kiln Theatre is a local venue with an international vision, focused on making space for unheard/ignored voices to be part of the mainstream. The theatre sits in the Borough of Brent, where more than a hundred languages are spoken locally. Prior to leading Kiln, Rubasingham worked internationally as a freelance theatre director for more than 15 years, predominately directing new writing. She was awarded an MBE in the 2017 New Years’ Honors list.

Jacqueline Woodson
Jacqueline Woodson is the recipient of a 2020 MacArthur Fellowship, the 2020 Hans Christian Andersen Award, the 2018 Astrid Lindgren Memorial Award, and the 2018 Children’s Literature Legacy Award, and she was the 2018–2019 National Ambassador for Young People’s Literature. She is also a MacDowell Fellow (4x 90-09). Her New York Times bestselling memoir, Brown Girl Dreaming, won the National Book Award, as well as the Coretta Scott King Award, a Newbery Honor, and the NAACP Image Award. She also wrote the adult books Red at the Bone, a New York Times bestseller, and Another Brooklyn, a 2016 National Book Award finalist. Her dozens of books for young readers include Before the Ever After, New York Times bestsellers The Day You Begin and Harbor Me, Newbery Honor winners Feathers, Show Way, and After Tupac and D Foster, and the picture book Each Kindness, which won the Jane Addams Children’s Book Award.

About 92ND Street Y
92nd Street Y is a world-class, nonprofit cultural and community center that fosters the mental, physical and spiritual health of people throughout their lives, offering: wide-ranging conversations with the world’s best minds; an outstanding range of programming in the performing, visual and literary arts; fitness and sports programs; and activities for children and families. A proudly Jewish organization since its founding in 1874, 92Y embraces its heritage and welcomes people of all backgrounds and perspectives. For more information, visit www.92Y.org.