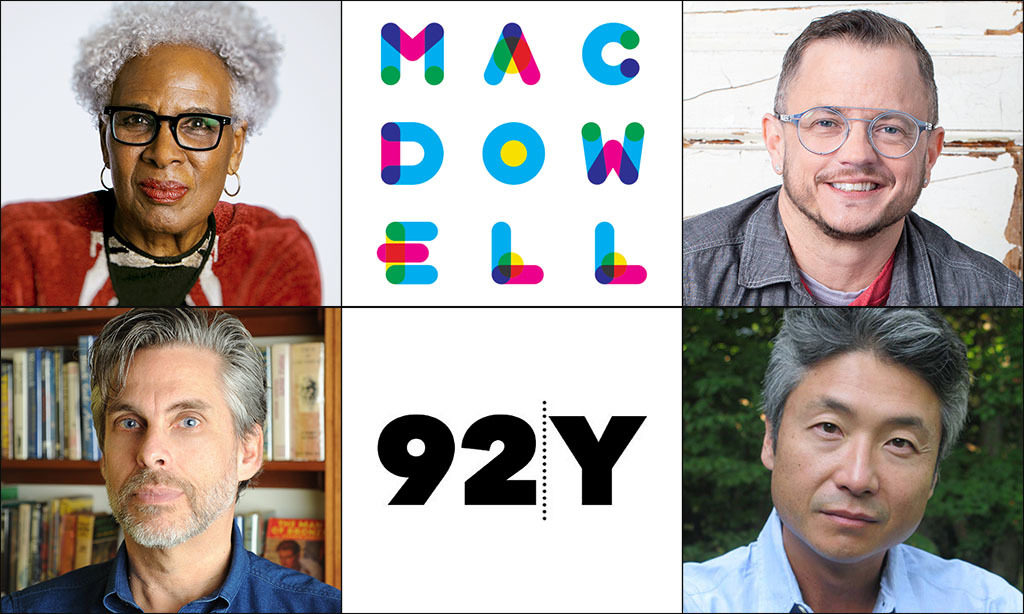 Virtual conversation May 6 on the Enactment of Identity: P. Carl, Michael Chabon, and Chang-rae Lee speak to Nell Painter about how artists’ personas inform their work.

Historian, author, visual artist, and MacDowell Board Chair Nell Painter will lead the second in a series of free virtual discussions about the arts and creativity on Thursday, May 6, at 7 p.m. with memoirist and theatre artist P. Carl and novelists Michael Chabon and Chang-rae Lee. These four esteemed creators will discuss the relationship between the artist’s vision, the construction of character and story, and the ways their own individual and social identities – however they interpret them – interact with their creative practices.

The free event, tackling everything from the performance of masculinity and men’s observations about their hair, to the intersections of gender with race and privilege, is part of a multidisciplinary series presented jointly by the 92nd Street Y, New York’s world-class cultural and community center, and MacDowell, the nation’s oldest contemporary arts residency program.

The first of these salons brought together actor and writer Andrea Martin, theatre director Indhu Rubasingham, and author Jacqueline Woodson in a discussion that probed the relationship between their identities and their art, as well as the barriers artists face when telling the stories that are traditionally left untold. Both it and the upcoming event provide an intimate front-row seat to the type of unscripted, interdisciplinary discussions that happened every day between MacDowell Fellows before the pandemic, and will occur again when it is over. Our Fellows often tell us that these conversations are a cherished and essential component of the MacDowell experience.

Nell Painter, who is looking to expand the dialogue about the value and importance of art to our culture, especially in a fast-changing world, will host three salons that will take place over the course of 2021. This series of conversations about culture, creativity, and the arts serves to capture the magic of artists-in-residence from every discipline coming together at MacDowell. It features artists and luminaries from across the globe in dialogue, including Mary Schmidt Campbell, president of Spelman College; Lonnie Bunch, secretary of the Smithsonian; and Marc Payot, president of Hauser & Wirth as well as others soon to be announced.

Register for this free event with 92Y.

To become a sponsor of this event series please visit this link or email events@macdowell.org.

Nell Painter
After a fulfilling career as a publishing Princeton historian (most notably as the author of The History of White People), Nell Painter began again in art school, a move eliciting a great deal of curiosity. In residence at MacDowell in 2016, she completed a memoir entitled Old in Art School, which was a finalist for the National Book Critics Circle autobiography award. In 2017 she completed the series "You Say This Can't Really Be America" and in 2018 she published an art review of Soul of a Nation: Art in the Age of Black Power in the New York Review Daily. In residence at MacDowell in 2019, Painter created "Ancient Hair Book" and four installations on her studio wall for a project that will ultimately become an artist's book with the working title Were the Ancients White? Painter was appointed Chairman of the Board of Directors of MacDowell in 2020.

P. Carl
P. Carl is a senior distinguished artist in residence, Department of Performing Arts, at Emerson College in Boston and the author of the memoir, Becoming a Man: The Story of a Transition (Simon & Schuster, 2020). He was the Spring 2020 Anschutz Fellow at Princeton University, awarded a 2017 Art of Change Fellowship from the Ford Foundation, the Berlin Prize fellowship from the American Academy for the Fall of 2018, and the Andrew W. Mellon Creative Research Residency at the University of Washington. His work has been published in the New York Times Magazine, The Boston Globe Magazine, and Lit Hub. He is currently working on the stage adaptation of Becoming a Man, commissioned by American Repertory Theater.

Michael Chabon
Michael Chabon is the author of many New York Times bestselling novels including Wonder Boys, which was made into a critically-acclaimed film featuring actors Michael Douglas and Tobey Maguire. The Amazing Adventures of Kavalier & Clay was selected by the American Library Association as one of the Notable Books of 2000 and won the New York Society Library Prize for Fiction, the Bay Area Book Reviewers Award, the Commonwealth Club Gold Medal, and the Pulitzer Prize. The Yiddish Policemen's Union, won both the Nebula Award and Hugo Award for Best Novel. His other novels include Gentlemen of the Road, Telegraph Avenue, and Moonglow. Chabon has also written a number of screenplays, and co-wrote (with Ayelet Waldman and Susannah Grant) the Emmy-nominated Netflix series “Unbelievable.” He is executive producer and showrunner for “Star Trek: Picard,” and collaborated with acclaimed music producer Mark Ronson as lyricist for Ronson’s album Uptown Special. Chabon has been a member of the Academy of Arts and Letters since 2012, and served as Chairman of the Board of Directors of MacDowell from December 2010 until January of 2020.

Chang-rae Lee
Chang-rae Lee is the author of six novels: Native Speaker (1995); A Gesture Life (1999); Aloft (2004); The Surrendered, which was a Finalist for the Pulitzer Prize; On Such a Full Sea (2014), which was a Finalist for the NBCC and won the Heartland Fiction Prize; and most recently My Year Abroad (2021). His novels have won numerous awards and citations, including the Hemingway Foundation/PEN Award, the American Book Award, the Barnes & Noble Discover Award, ALA Notable Book of the Year Award, the Anisfield-Wolf Literary Award, the Gustavus Myers Outstanding Book Award, and the NAIBA Book Award for Fiction. He has also written stories and articles for The New Yorker, The New York Times, Time (Asia), Granta, Conde Nast Traveler, Food & Wine, and many other publications.

About 92ND Street Y
The 92nd Street Y (92Y) is a world-class center for the arts and innovation, a convener of ideas, and an incubator for creativity. 92Y offers extensive classes, courses and events online including live concerts, talks and master classes; fitness classes for all ages; 250+ art classes, and parenting workshops for new moms and dads. The 92nd Street Y is transforming the way people share ideas and translate them into action all over the world. All of 92Y’s programming is built on a foundation of Jewish values, including the capacity of civil dialogue to change minds; the potential of education and the arts to change lives; and a commitment to welcoming and serving people of all ages, races, religions, and ethnicities. For more information, visit www.92Y.org.