A Praise Song for Betye Saar 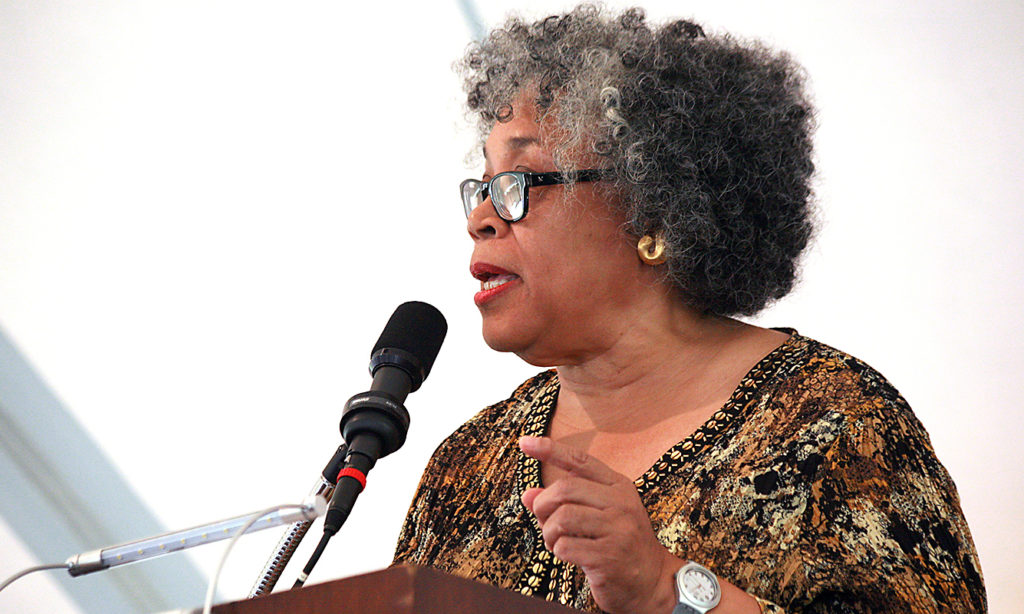 I’m entitling this A Praise Song for Betye Saar.

One of the things that Betye Saar and I have done together in the past, and have not done enough of in the present, is to shop. I recalled that fact a few years ago when at the behest of the Michael Rosenfeld and Halley Harrisburg I wrote a brief personal reminiscence about Betye. I rely on that reminiscence here with some recent embellishments.

I suppose I was shopping with Betye Saar even before I met her. When I first encountered her work in the late 1970s—in the notorious exhibition of black American artists organized by Robert Doty at the Whitney Museum of American Art in 1971, and later in the basement gallery in SoHo of Monique Knowlton—I had just embarked on what turned out to be an occasional hobby of collecting black memorabilia. I sought out dolls, figurines, photographs, salt shakers, twine holders, fly swatters and whisk brooms in expected and unexpected places. I would later realize that I was shopping along with Betye in spirit.

Betye’s engagement of and challenge to commercial black imagery, which had been an irksome presence since the Reconstruction era, was a never-ending source of fascination for me. As a young black person I had grown up with the expected unease with and disgust for black stereotypes such as Stepin Fetchit, Uncle Tom, Sapphire, Amos and Andy, Aunt Jemima, Uncle Mose, and Uncle Ben, and a whole other panoply of characters. These were certainly not the types of images in which one expected to find a new and positive black assertiveness. What Betye’s art work did was to let me and others in on another reading, another consideration of those images, their historical reality, and their social impact, and to begin to recognize that they could be mechanisms for survival, and a means to coopt the distortions of racist ignorance.

Because of the fact of her work, therefore, my avocational passion—which some of my family and friends viewed as a transgressive pleasure—was given context and meaning, and the objects in my collection shed their controversial pasts as symbols of shame and ridicule. They were resurrected as instruments of liberation for me as I strove to define myself in the world.

At times I also realized that the dialogue I could have with Betye’s work could take on the character of an inside joke, or a nod and a wink of those in the know. This was the case when I engineered the acquisition of one of Betye’s boxes, Whitey’s Way (1970-1996) for the Metropolitan Museum of Art when I was on their staff. This piece shows a series of identical white figurines of alligators aligned on a mirrored surface. I realized that my colleagues at the Metropolitan initially saw this as an expression of ethnic serial imagery. At the time it was brought into the Museum, a postcard that Betye had put into the lid of the box had gotten loose and it was only when it was recovered that the true meaning of the work was evident. The post card showed a popular image of a young black boy half in the mouth of an alligator referring to the actual, though thankfully not widespread, use of black babies as alligator bait.

So in light of my affinity for mementoes from the past, and Betye’s need to replenish her stock of images to make her art when we got together we would shop whether in a flea market or swap meet or places like the Terminal Market in Philadelphia, a trendy boutique on the upper west side of Manhattan, or in a new mall she insisted that I see in Los Angeles. We hunted for presents for ourselves and friends, ate in the hottest restaurants and where possible took in the drop-dead gorgeous views.

I hope that I’ve indicated how Betye Saar and I have long had a multi-layered relationship: artist/curator, teacher/ student, black women across generations.

As a curator I’ve had to privilege of writing about her work, and being able to do so from a highly personal point of view. I have observed how she creates a visual dialogue between real and manufactured images, particularly of black women. How she exploits the racially charged metaphorical meanings of colors such as white and black. How she affirms our spiritual essence as African peoples as well as our empirical challenges in the world. After all she emerged as an artist in the 1960s and 70s as black Americans were involved in a movement to assert their right to economic, social, and political equality in this country. One of the crucial strategies in this effort was the recasting of the self-image of the black American.

In this context, as Susan Scott indicated yesterday, Betye’s legendary work The Liberation of Aunt Jemima of 1972 burst onto the landscape of American art like a molotov cocktail. This boxed assemblage of modest proportions gathered "found" objects into a "mojo" (i.e. an amulet or charm that works with the strength and conviction of the user) that transmuted the mythical stereotype of Aunt Jemima from some fantasy of the good-natured black servant to a dedicated terrorist outfitted with a grenade and rifle, ready to reclaim her power and her dignity.

As a student I learn from her every time she exhibits her work. I see how artifacts from vernacular life and personal histories can be brought together and result in works of great visual acuity and political acumen. At times the effects are breathtaking even in their simplicity. I think specifically of a small sculpture of a kneeling African woman set in a gilded cage that was part of her exhibition Cage at the Rosenfeld Gallery a few years ago. It was a heart-stopper, metaphorically capturing the experience of women caught in a cage—albeit gilded—but caught in a cage nonetheless.

As a student I also learn how she brings to her work certain qualities that are key elements of her vision: improvisation, emotional engagement, nature, and her own personal presence and energy.

A primary encounter with Betye’s work is on an intimate scale where one can meditate quietly and privately on her transformative gestures. But even as the assemblages and collages gave way to larger altar-type works and eventually installations, the context for the object in Saar's work grew richer and more profound in nuance. While this enlargement of scale and space would seem to deprive the viewer of the experience of the quintessential intimacy and concentrated energy of the early works, Saar has never lost her primary connection to the innate and accumulated aura of the individual object. Through the artful evocation of nostalgia, shamanism, autobiography, and reconstruction in these works Betye has been able to consistently and directly engage her audience.

Her installation work, which has been a part of her oeuvre since the 1970s, has given her a vehicle by which she could "travel" her art and engage a larger number of people—particularly art students. She revels in the improvisational mode in which she has had to create these work in the past. Often it was not feasible to transport a cache of objects from her studio, so she would find herself creating the work on site in conjunction with others. On occasion even visitors to the exhibition might be invited to leave their own contribution on a work, accumulatively altering the form and substance of the work during the exhibition. In this way Betye brings her work squarely into the realm of communal expression that characterizes the work of the tribe—i.e. the familial group—and the magical and occult aspects of the objects are refocused again.

But the roots of that expression are multi-variant. Betye thinks of herself not only as a woman artist, but as a California artist. As she has noted the first consideration has given her access to an intuitive gift that was nurtured and sustained through the multi-ethnic gene pool into which she was born. The second consideration has led her to feel a particular cultural affinity to Asia and to appreciate the West Coast environment where light and water are omni-present, reinforcing her particular connection with nature.

As women bridging generations, Betye and I have shared perspectives on our experiences as black women, meditating on the conditions of exploitation and servitude that for many of us are but one or two generations behind us. As our late great mutual friend Arlene Raven, the noted feminist critic and writer, observed about Betye’s work dealing with black female labor: She is able to “[intensify] the irony inherent in her materials, exaggerating beyond satire to black humor,” while demonstrating “the involuted and unfinished nature of American apartheid.”

I cannot conclude my remarks without acknowledging the influence that Saar has had in the art world on generations of younger artists. Her gift as a manipulator of texture, color, image, shape and contour informs the work of a host of artists for whom she paved the way for their positive reception in the art world. A few who readily come to mind:

Betye Saar is an artist for all ages. At a time in human history where individual responsibility on all planes, especially the spiritual, is increasingly abrogated, she reaffirms the validity and power of the individual and shows us the way to tap the best qualities in ourselves and reach our highest good. She is a guru, a griot and a masterful materialist. She is also feisty, feminist, mystical, and race affirming.

Therefore this year’s MacDowell medal committee, which also included Richard Haas, Leslie King Hammond, Nene Humphrey and Susan Sollins (under the stewardship of Cheryl Young and Michael Chabon), is honored to present the 2014 MacDowell Medal to Betye Saar for her outstanding achievement and continuing effervescence in the arts of the United States and the world.