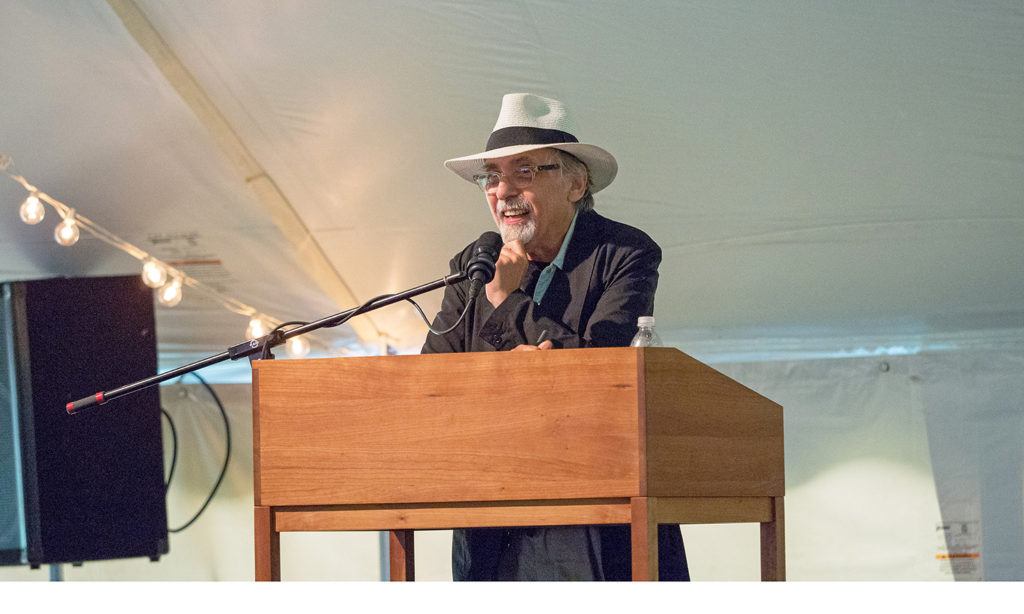 So, keeping the word “lunch” in mind, I’ll set my timer for four impromptu minutes. Just so you know, this is all five different essay topics being smashed together.

I want to start by thanking MacDowell for allowing me to be the blockbuster, to use the immigrant metaphors of coming into the world of the tonier arts from the comics slums. And I’d like to thank everybody here, including Allison for a beautiful toast and definitely to Michael who has been a great advocate and interpreter of comics and a person I’m very proud to know and hang with, and to Hillary who is an acute – not to say cute – collaborator and I’m grateful that you took this heavy-lifting part of the project on.

I’d also definitely like to thank Nadja Spiegelman who was a Fellow here in 2017 and claimed it to be a life-transforming experience, and said, “I’m not going to insist that you go because I know you’ll hate me if I do that, but if you do go I’ll be proud to be there.” And if this was a medal for the co-creation of Nadja, I would be very gratefully un-ambivalent about coming to accept it, but I also am grateful for my real collaborator, the person who owns half this medal and half of everything else that ever happened to me that was ever worth making and doing, Françoise Mouly (applause), the co-maker of RAW, who helped me put Breakdowns to bed. My first real kind of cornerstone achievement, if we’re going to talk about concrete. For RAW magazine that she dragged me into reluctantly after I’d sworn never to do another magazine after doing an underground comics magazine called Arcade. For all the work on RAW, for keeping The New Yorker lively, alive and worth looking at the cover of every single week. (applause) For Toon Books, saying comics, they’re not just for grownups anymore, doing an about-face. Comics for children who need to learn how to read and comics are great for reluctant readers, also known as boys (crowd chuckles) and for Resist Magazine that Nadja and Françoise made just in time for the disaster that befell us in 2016, and it’s with that disaster in mind that I have to give this set of words:

It’s a terrible time for comics and the best of times for comics, but the best comics are appearing on television these days, because one can’t keep up with the bad news, fake or not. If poetry is news that lasts forever, Trump is news that lasts 30 seconds at a time. And a cartoonist can’t work fast enough to keep up with the horrible changes that keep coming our way even if it has a comics character that rivals Baby Huey, and his monstrous yellow galumphing self. But it’s important to try and TV comics only have to deal with one or at the most, two news cycles per day, and have a franchise on it that the slow work of cartooning can’t quite have.

It’s also important to note that – I’ve got to tell you -- I’m ambivalent about everything, including getting this award because I understood that on some level I deserved it, on the other hand I’m not sure I want the attention. Really I’ve had a lot. I figured one more medal could sink me.
(laughter)

What helped convince me was Nadja’s enthusiasm: "It’s like summer camp for grownups who are smart." But the other thing that really did help me to decide to do this, to become the sacrificial red ribbon who could be cut to allow the horde of comics artists to enter the sacred MacDowell precinct, was when I learned you didn’t have to go, you could still get the medal. And it kind of gave me permission to come here today. That made a big difference.

Now, comics. What word are we going to use for this, I have no idea. I was very reluctant about the word graphic novel coming in as a kind of phony respectability that can come with the phrase. I remember Neil Gaiman telling me that he was at some large party where he’s introduced to one of these tony people in London as a comic book writer, who then walked away but came rushing back before the evening was over saying, “I didn’t know you were a graphic novelist.” And his response was, “I went in as a hooker and went out as a lady of the night.”
(laughter)

So, I now see its value. I’m beginning to see things that are made only because the phrase graphic novel has come to exist, even retrospectively for people like Frans Masereel, and Lynd Ward for whom I did the introduction for the complete collection--The library of America’s first visual contribution to it who made these “wordless novels.” Speaking of wordless, the word I’ve always proposed for this in decades past has been Co-Mix, C-O dash M-I-X to Co-mix words and pictures. Growing out of the underground X at the end of comix, and preferring it because it got to something that didn’t require that I be a comic artist coming up with fancy one-liners at my acceptance speech, but involving co-mixing words and pictures together, which seems pretty basic to this idiom.
(applause)

It’s like categories can’t work well and it’s something that happened from the enlightenment on. Before the enlightenment everybody looked at stained-glass windows to learn The Greatest Story Ever Told but words and pictures got redefined at the end of the 18th century when we needed more literate people rather than just people who tilled the fields, and at that point words and pictures started becoming treif, un-kosher. We can’t mix these things together, words and pictures, each for its own domain sphere and likely use. Now, in this world where words and pictures, both, bombard us all day long it’s possible for this to come together again at a moment when Marshall MacLuhan said, "mass medium, when it’s no longer the dominant medium, must become art or die." So, ambivalently, I apologize for helping to gentrify comics.
(laughter)

Because there’s something that gets lost. Now, I’ve met young graphic novelists, who you know, go, “Make way, a graphic novelist is coming through now, let’s rock and roll.”
(laughter)

That shame that came with being a cartoonist that Michael alluded to, it’s important to comics and it’s basic to comics. It is an outlaw medium that took over the world when nobody was looking. It is something that acknowledges how dangerous it is to put one’s thoughts and feelings on paper, which I know novelists and poets have had the right to do. But here in the bastard children of art and commerce that gave rise to the Sunday outing that became comics is a very unique form because it’s built on a horrible central truth, which is it’s built on stereotype and picture writing, a kind of symbolic language. And those symbols are born in the most Jurassic part of our brain. To become a cartoonist meant learning how to draw two women: The Madonna and the whore, and maybe the grandmother as well.

I won’t even use all the expletives here, just because I won’t even though I’m fearless. But I would say that every ethnic group has had its most vile representations in comics form and it’s interesting that everybody recognizes them. It’s built into our language and it means it’s a lot of work to subvert them. But one must subvert them, not suppress them, for as horrible as the horror show of our government is these days, that may lead to a recap of Maus III -- as we live through that moment, it’s important to understand that those pejoratives have to be worked through, not shamed out of existence to talk to the important and profound changes that we are living through now. And that one, as a cartoonist, one must learn how to subvert those clichés. When I made Maus, to call a Jew a mouse because they didn’t protest violently or in great numbers at their own execution, to conjure up the image of rat that needed to be exterminated that was part of making Maus, meant rethinking what these stereotypes and clichés might be and using them rather than ignoring them.
(applause)

I thought that was an important part of what had to happen. Although I know that among the many really admirable winners of the MacDowell Award and residencies here, George Crumb was represented, but R. Crumb wasn’t, and inviting him in would invite all the problems that come with comics to your doorstep.

And with that all I can do is say, Thanks so much!