Arts Advocacy Day Kicks Off with "The Art of Democracy" 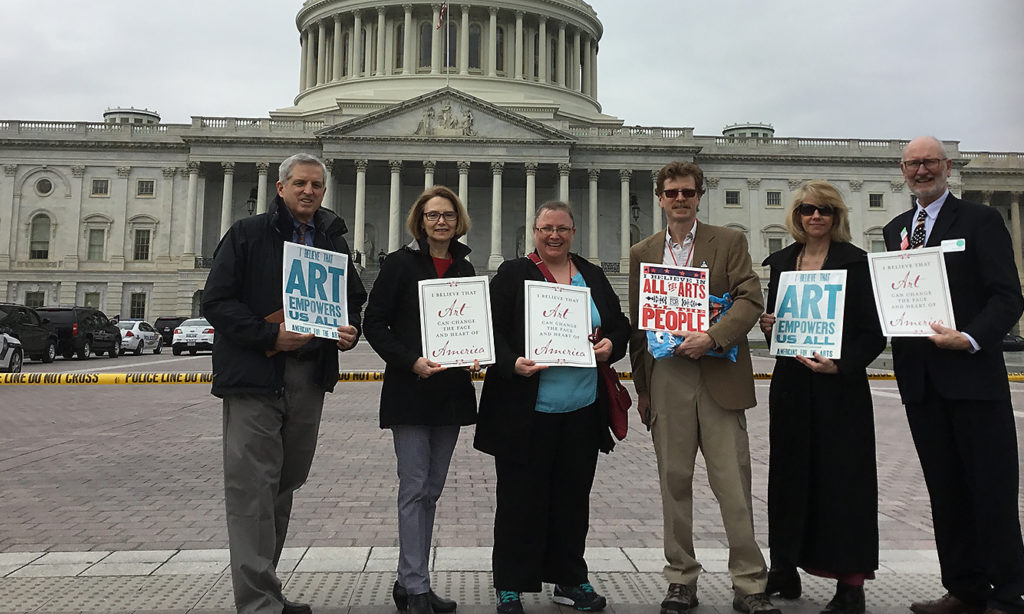 New Hampshire Arts Delegation (from left): Educator Peter Clarke, Nicki Clarke of the Capitol Center for the Arts, Raina Ames of the UNH Theatre Dept., Jonathan Gourlay of The MacDowell Colony, Shannon Mayers of the Redfern Arts Center at Keene State, and Roger Brooks of the NH Council on the Arts. (photo by Carol Brooks)

The MacDowell Colony took part in the 30th annual Arts Advocacy Day in Washington, D.C. on March 20-21. The event, hosted by Americans for the Arts, brought together arts educators and arts organizations from across the United States for a day of seminars and offered an opportunity for state delegations to meet with lawmakers and discuss the local, regional, and national importance of the arts.

The highlights of the event were Monday evening’s brief performance by playwright and actress Anna Deavere Smith who excerpted a few characters from her most recent one-woman show, and an address by Ford Foundation President Darren Walker at the Kennedy Center. Walker delivered an inspiring Nancy Hanks Lecture called “The Art of Democracy: Creative Expression and American Greatness” to more than 700 attendees – the largest crowd in the event’s history.

Walker quoted President John F. Kennedy in his opening words when he said, “This country cannot afford to be materially rich and spiritually poor,” before enumerating the reasons the arts and support of the arts is vitally important to the strength and effectiveness of democracy. Walker also explained the need to maintain a federal investment in the arts, setting aside the fallacy that private funding can make up for cuts in federal support of the arts. “This is not the time for a poverty of imagination in our country,” he said. “The arts may very well be the thing that saves us.”

On Tuesday, March 21, MacDowell Communications Manager Jonathan Gourlay joined the New Hampshire delegation of representatives from the Capitol Center for the Arts, The New Hampshire Council on the Arts, The Redfern Arts Center at Keene State College, and the UNH Theatre Department. The delegation met with staff of U.S. Senators Jeanne Shaheen and Maggie Hassan, and Representative Carol Shea-Porter as well as Representative Ann McLane Kuster to discuss the value of NEA funding to New Hamsphire’s arts culture.