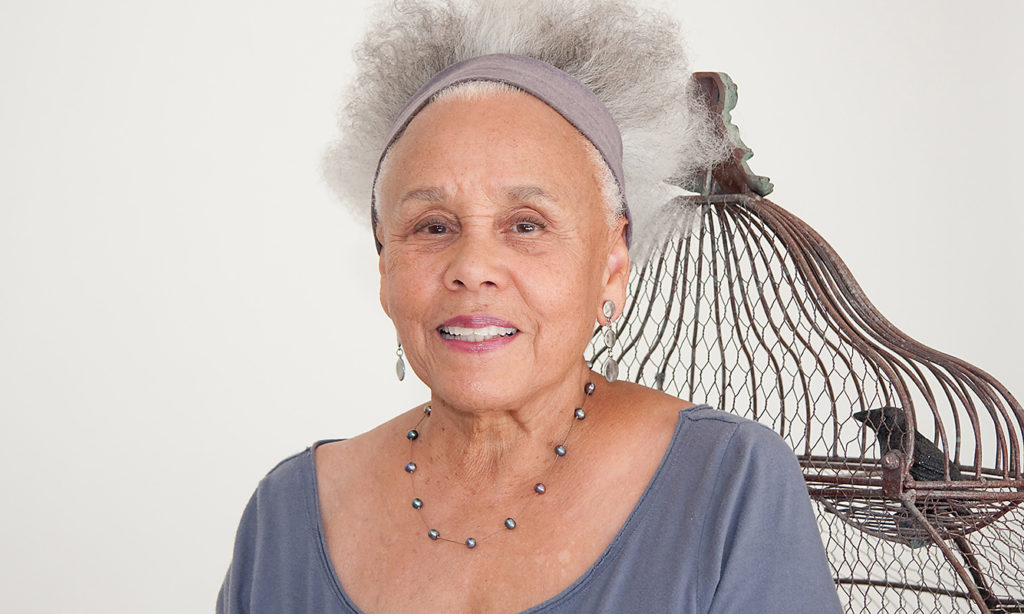 When assemblage and installation artist Betye Saar accepts the 55th Edward MacDowell Medal on Sunday, August 10, she will join impressive company. The Edward MacDowell Medal has been given since 1960 to an individual artist who has made an outstanding contribution to his or her field, and Saar’s contribution to the visual arts world has had a resounding impact for decades.

“Betye Saar has been a key influence in the dialogues around race and gender in the art world since the 1960s,” said Museum of Arts and Design Curator Lowery Stokes Sims, who chaired the Edward MacDowell Medal Selection Panel and will introduce Saar at the public ceremony during the annual Medal Day celebration. “Her exquisite collages have posed questions, challenged presumptions, and have never failed to demonstrate her unique aesthetic sensibility.”

Joining Sims on the selection panel were visual artists and MacDowell Fellows Nene Humphrey and Richard Haas, Leslie King-Hammond, art historian and founder of the Center for Race and Culture at the Maryland Institute College of Art, and Susan Sollins-Brown, executive producer and curator of PBS’s “Art in the Twenty-First Century.”

STARTED AS A PRINTMAKER

Saar, who started as a printmaker, is perhaps best known for her intimate assemblages and collages, which not only challenge the myths and negative stereotypes ascribed to the African-American community but also demonstrate a connection with a myriad of mythic and spiritual concepts from Africa and the Caribbean.

“Betye Saar uses shards of myth and narrative, and found bits of history – with all its pain and magnificence – to build scale models of a world that is intensely personal and yet instantly, inescapably recognizable as our own broken world,” said MacDowell Colony Chairman and author Michael Chabon. “These scale models of brokenness help us to interpret and find meaning in that world, mapping it with fierceness, a sense of play, and the wild accuracy you find among the great cartographers and world-builders, also known as artists, whose explorations the MacDowell Colony has for so long striven to foster and sustain.”

Born in 1926 in California, Saar grew up in Pasadena during the Great Depression and often visited her grandmother in the Watts neighborhood of Los Angeles during the 1930s. As a result, she was able to watch Simon Rodia sort through piles of debris, pick out discarded objects, and cement them to his famous towers. “I think that was the beginning of me becoming an assemblagist or recycler,” Saar has said.

Saar emerged as a leader in the redefinition of African American art in the 1960s and has continued to explore her cultural history in complex works inspired by a curiosity about the mystical. The breadth of her works over the last four decades reflects her interests in politics, race, religion, and gender as she has worked to “reach across the barriers of art and life, to bridge cultural diversities, and forge new understandings.”

According to visual artist Renee Stout, no history of American Art can be complete without including a discussion of artists like Betye Saar, who, says Stout, has been in the forefront of putting African American history and culture into art.

“When I found out she was being awarded the MacDowell Medal it all made sense to me,” said Stout. “I’m not surprised she’s getting it.”

Stout said Saar stands out and has been productive for so long because she’s an artist that keeps on producing exciting work “when no one seems to be paying attention.”

“The way she takes a personal narrative and transforms it to a national narrative is very captivating,” said Filmmaker Yemane Demissie, who is inspired by Saar’s art. “What speaks to me is that her work is extremely personal and yet when I look at it I can connect with it. It’s at once both personal and universal.”

And now that’s she’s going to be presented the Edward MacDowell Medal, Saar said it’s given her the confidence that she is on the right path. She added that the award is “maybe telling me I have a karmic obligation to express how I feel about these [political, women’s rights, and spiritual] issues. It gives me a new push to explore how the ordinary can be transformed into the extraordinary.”

“I couldn’t march during the Civil Rights era as a mom, so I started collecting derogatory images and items and used them to express my anger and disappointment, and that’s how I got started.”

The 2014 MacDowell Medalist has received numerous awards, including fellowships from the National Endowment for the Arts in 1974 and 1984, and the Getty Foundation in 1990. In 1994, she and John Outterbridge represented the United States at the 22nd São Paulo Biennial. Her work is represented in numerous museum collections. As an indication of her stature in the art world she was featured in no less than 13 of the exhibitions that formed part of the 2012 Pacific Standard Time festival.

“I’m not really well known, at least at the level of other MacDowell medalists,” Saar said. “And once I got over the shock [of being named medalist], I was thrilled and of course honored…. I’m still a bit gaga over it.”