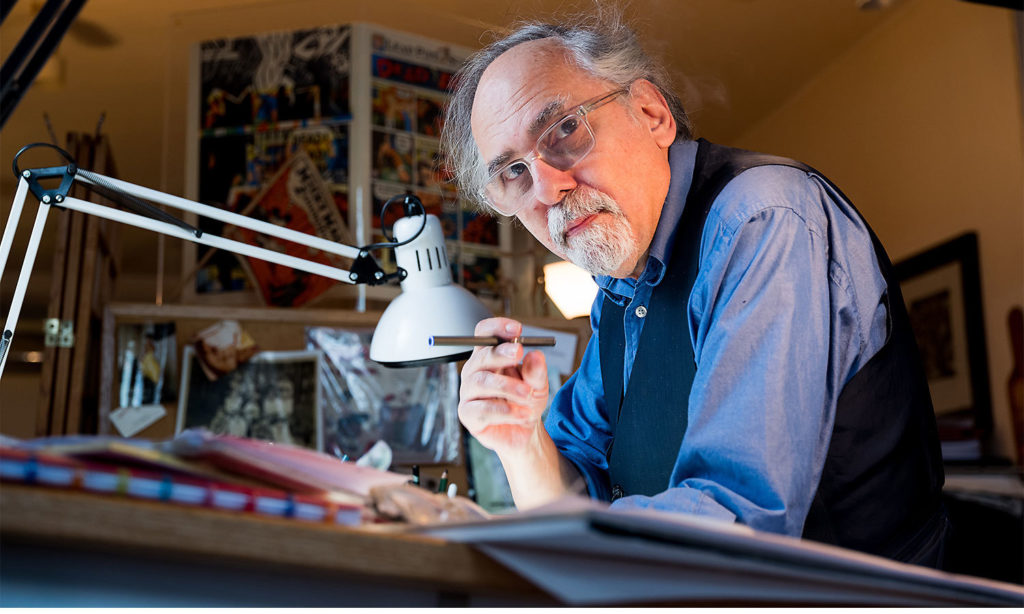 Pulitzer-winning author of Maus will be honored with the first-ever Edward MacDowell Medal given in comic art at free public event on August 12, 2018

Peterborough, NH – May 21, 2018 – The MacDowell Colony will award cartoonist Art Spiegelman its 59th Edward MacDowell Medal during a free public event on Sunday, August 12 at The MacDowell Colony’s campus in New Hampshire. As one of the nation’s leading contemporary arts organizations, MacDowell has awarded the prestigious medal annually since 1960 to an artist who has made an outstanding contribution to American culture.

Spiegelman’s comics are best known for their shifting graphic styles, their formal complexity, and controversial content. His graphic novel Maus was awarded the Pulitzer Prize in 1992, bringing comic books out of the toy closet and onto the literature shelves.

“Seeking to encompass communities and practices that reflect the vibrant and restless diversity of MacDowell Fellows and the kinds of art they make, in recent years the MacDowell Medal has begun to extend the sweep of its gaze,” said MacDowell Colony Chairman, Fellow, and Pulitzer Prize-winning author Michael Chabon. “The increased cultural prominence of Comic Art and its once-wayward practitioners can largely be laid at the feet of a single artist: Art Spiegelman, whose work, tragic and shticky, personal and world-historical, grand and intimate, sophisticated and deceptively crude, changed the world of Spiegelman’s beloved ‘comix’—simply changed the world—forever.”

“Art Spiegelman is one of the most inventive, internationally celebrated, and influential living cartoonists,” said Bechdel. “Over the past five decades, he has exploded the narrative, visual, and structural possibilities of comics, and in the process has also shifted the terrain of modern literature. From his early work in experimental underground comics to the canonical Maus and the boundary-breaking In the Shadow of No Towers, to his more recent work across different media, as well as his significant images for The New Yorker, Spiegelman has demonstrated a profound virtuosity in his medium, using the language of comics to forcefully portray complex historical realities.”

In 1980, Spiegelman founded RAW, the acclaimed avant-garde comics magazine, with his wife Françoise Mouly, and taught history and aesthetics of comics at the School for Visual Arts in New York from 1979-1986. In 1992, he won the Pulitzer Prize for his masterful Holocaust narrative Maus: A Survivor’s Tale—which portrayed Jews as mice and Nazis as cats. Maus II continued the remarkable story of his parents’ survival of the Nazi regime and their subsequent lives in America. His work has been published in many periodicals such as The New Yorker, where he was a staff artist and writer from 1993-2003. He is the author of Breakdowns and In the Shadow of No Towers, which appeared on many national bestseller lists, and was selected by The New York Times Book Review as one of the 100 Notable Books of 2004.

The ceremony will take place on Sunday, August 12, 2018, beginning at 12:15 p.m. at the MacDowell Colony grounds at 100 High Street in Peterborough, New Hampshire. Medal Day marks the one day each year that the Colony is open to the public. Open studios hosted by MacDowell artists-in-residence begin at 2 p.m. and end at 5 p.m, and guests can enjoy picnic lunches on Colony grounds by pre-ordering or bringing their own. This free, public arts event is made possible with the support of Medal Day Corporate Partner the Lincoln Financial Foundation. For more information, please visit www.macdowellcolony.org

To watch video of past Medal Days, please visit our Vimeo page.

CONTEMPORARY for 111 YEARS:
Composer Edward MacDowell and pianist Marian MacDowell, his wife, founded The MacDowell Colony in 1907 to nurture the arts by offering creative individuals of the highest talent an inspiring environment in which to produce enduring works of the imagination. Each year, MacDowell welcomes more than 300 architects, composers, filmmakers, interdisciplinary artists, theatre artists, visual artists, and writers from across the United States and around the globe. More than 14,500 residencies have been awarded since its founding. Recipients have included Ayad Akhtar, James Baldwin, Ta-Nehisi Coates, Ellen Driscoll, Louise Erdrich, Osvaldo Golijov, Cathy Park Hong, Dee Rees, Colson Whitehead, and Julia Wolfe. Pulitzer Prize-winning author Michael Chabon is the chairman of MacDowell’s Board of Directors.