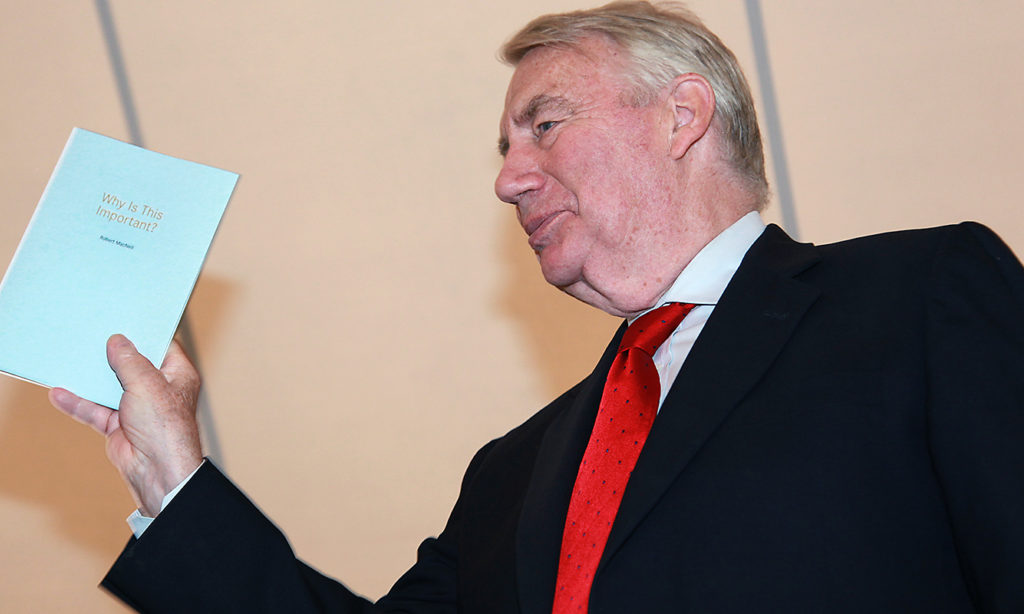 FOR IMMEDIATE RELEASE – April 15, 2010 – The MacDowell Colony, the nation’s leading artist residency program, has announced that Chairman Robert MacNeil and President Carter Wiseman will step down from their leadership posts in 2010. Media executive Susan Davenport Austin will succeed Wiseman in May, and a new board chairman will be named later this year.

“Carter and I decided to make way for younger hands on the wheel, and we do so with pride in the present state of the Colony — secure, protected, and a paradise for the artists who work there each year,” says MacNeil, who has served as chairman of MacDowell’s board since 1993. Having joined the board in 1995 and elected as president in 1999, Wiseman concurs: “Renewal is as vital to institutions as it is to art. This seems like the right time for a new team to extend MacDowell’s extraordinary legacy of supporting artistic creativity at the highest levels.”

During their many successful years of guidance and leadership, MacNeil and Wiseman have enriched and elevated MacDowell’s program. Executive Director Cheryl Young credits them both for enhancing MacDowell’s profile and steering the efforts of a number of large-scale initiatives, including a statewide celebration of MacDowell in 1996 and a yearlong program of national events marking the Colony’s centennial in 2007. “Under their steady direction over the past two decades,” said Young, “the Colony has thrived in a period marked by advancement and growth.” MacDowell has also successfully weathered a number of challenges during MacNeil’s and Wiseman’s tenures, including a 2008 legal battle that reaffirmed its tax-exempt status, thereby validating the charitable contributions arts organizations like MacDowell make to our culture. A search committee has been convened to select a new chairman, whom the Colony plans to have in place by the end of the year. President-elect Susan Davenport Austin is scheduled to be elected at a board meeting in May. She currently serves as a director and senior vice president and chief financial officer of Sheridan Broadcasting Corporation (SBC), and as president of the Sheridan Gospel Network. Prior to joining SBC, she spent 10 years in investment banking with Goldman Sachs; Bear, Stearns & Co.; and Salomon Brothers Inc. “She is a fabulous choice,” says Wiseman of his successor. “She’s smart, has a sense of humor, is incisive, and will bring a new perspective to the organization.”

MacNeil has been a highly influential and effective spokesperson for the Colony, amplifying — and furthering — its mission. In 1997, he accepted the National Medal of Arts on behalf of MacDowell at the White House; 10 years later, in honor of the Colony’s 100th year, he returned to Washington to present the Nancy Hanks Lecture on Arts and Public Policy at The John F. Kennedy Center for the Performing Arts. Hundreds of guests come to the Colony each summer to hear MacNeil’s address at Medal Day — a public event featuring the presentation of the Edward MacDowell Medal to an acclaimed artist for outstanding contribution to the arts. MacNeil will give his final Medal Day remarks for MacDowell on August 15th, when the 2010 Edward MacDowell Medal will be presented to acclaimed jazz composer Sonny Rollins.

Carter Wiseman, an architectural critic, writer, and teacher, will pass the torch as president of the board in May. An active champion of architecture as a discipline at the Colony, he was on hand to celebrate the first MacDowell Medalist in architecture, I.M. Pei, and has also lent his architectural expertise to design committees focused on the building of Calderwood Studio in 2000, and a planned interdisciplinary arts studio and expansion of the Colony’s Savidge Library. “The MacDowell Colony is a unique — and uniquely important — part of the cultural life of this nation,” says Wiseman. “I am grateful to MacDowell’s board of directors and the many MacDowell artists who have made my years as president so gratifying.”

A board dinner hosted by MacNeil on May 19th will honor Wiseman’s vital contributions to MacDowell. Plans for a special tribute to MacNeil are underway as part of MacDowell’s 2010 National Benefit in New York, which will take place at The TimesCenter on Monday, December 6th.

Situated on 450 acres of fields and woodland in Peterborough, New Hampshire, The MacDowell Colony welcomes more than 250 composers, writers, visual artists, theatre artists, architects, filmmakers, and interdisciplinary artists from the United States and abroad each year. The sole criterion for acceptance is talent; a panel in each discipline selects Fellows.