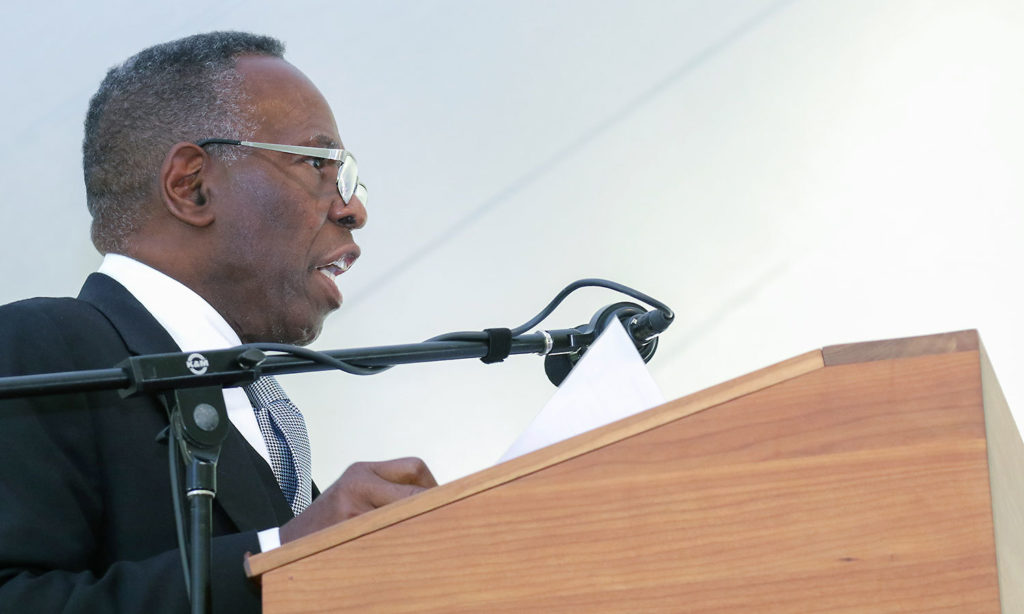 Transcript: Conceptual visual artist Charles Gaines addressing the crowd on Medal Day, Sunday, August 11, 2019, the day he was awarded the 60th Edward MacDowell Medal for his contributions to American culture.

I want to thank Thelma for an amazing introduction. Thelma’s been a hero of mine for many, many years. I’ve followed her right from the beginning. She’s made an amazing contribution to the world of art in general, to curation, exhibition, and to the careers of so many artists. Thelma is responsible for making their lives so much better. Thank you, Thelma.

I would like to thank The MacDowell Colony and its board of directors for presenting me with this honor. In addition, I would like to thank Philip Himberg, The MacDowell executive director, David Macy, who’s been so wonderful in helping and assisting myself and Roxana during our time here, and I would also like to thank David’s assistant, Ann Hayashi, and a special thanks to the selection committee for choosing me this year as the recipient. Although extraordinarily humbled, I must admit that it is a struggle for me to comprehend the reality of this recognition. It is challenging for me because the MacDowell [Medal] has been awarded to some of the most important and influential arts practitioners in the world, and although it is difficult for me to imagine myself as a member of this most exclusive club, I can nevertheless appreciate that it represents a serious judgement that comes from deeply held values of my peers. Therefore, I have come to terms with the fact that this is not an April Fool’s joke being performed in August.

To give a sense of how highly I regard this award, one of the past recipients was the great jazz saxophonist, Sonny Rollins. I purchased my first jazz album in 1957 when I was 13. It was titled, The Sound of Sonny. At that point I became a die-hard Sonny Rollins fan, an obsession that continues today. Before I was old enough to drink, my best friend Walter and I would find ways to sneak into the Village Vanguard in New York to hear him play. Walter could get in because he always looked older. He was like six-two. But I couldn’t always, at 16 years I looked like I was 12. On those occasions when I couldn’t get in, I would just sit outside the club and catch bits and snatches of phrases that leaked out every time the entry door opened. This was my first deep encounter with art. As I said, the list of awardees is so incredibly distinguished, but Sonny Rollins was very special. My commitment to music starts with him, he was the reason I began studying percussion. Even more, listening to Sonny’s complex musical phrasings taught me how to listen to different types of music, including classical, and in fact introduced me at a young age to the idea of avant-garde experimentation, ultimately teaching me how to listen to composers from John Cage to another MacDowell recipient, Steve Reich. So, the idea that I am receiving the same medal that Sonny Rollins received is simply jaw dropping. It is simply beyond explanation.

Before discovering music, I had been studying art, beginning as a young child and ultimately receiving an M.F.A. Shortly thereafter began exhibiting professionally. So, for me there was art and there was music. For many years these two parts of my life seemed unrelated. So much so that after I began exhibiting I stopped playing music, only experiencing it as a fan. It wasn’t until perhaps seven years ago that I began playing again, performing with the sculptor, the late Terry Adkins in his art performance collective titled, The Lone Wolf Recital. Terry was also a musician who never saw a division between his music and art practice. Because of this, performing with Terry made it possible for me to understand the connection between my visual practice and my music. To explain this let me return to Sonny. I was drawn to Sonny Rollins by his complex phrasings, the way he would take a melodic line through a myriad of permutations, turning it in and out, up and down, flipping it inside, then outside. His phrasing was for me a cascade of sometimes intricate, sometimes simple patterns that seemed to be produced by chance, what we call improvisation in jazz. The sound patterns were in fact a product of a system of permutations and possibilities that were entirely rule based but infinite in possibilities. This led me to understand my interest in systems as a visual artist. Listening to Sonny and also John Coltrane’s complicated patterns taught me how to listen to Steve Reich, particularly his piece “Come Out to Show Them,” that I heard by chance on a public radio station in 1968. Reich turned out to be an important influence.

I did not make these connections between visual art and music in those early years, but it is clear to me now that these experiences in music helped me develop my early art practice by expanding the idea of what was possible in art beyond the Eurocentric models.

Ultimately, I began to understand this as my temperament, an interest in intellectual practices as much as the poetic: I found it more interesting to employ rational systems to make art rather than making art from my subjectivity. The system that I deployed in my work facilitated the production of patterns that would constantly surprise me, just as I was surprised when listening to Sonny Rollins. The visual pattern produced by the conceptual application of a system realized an unpredictable and surprising aesthetic and conceptual experience. I similarly work in systems in my video-drawing installations entitled “Manifestos” where I translate a political text into music by employing rules that convert the letters of the text into notes. The music that is produced is performed and recorded, and played in the installation as the sound track of a video where we see the scrolling of the original political text. The rules produce musical phrases that when heard in the context of the scrolling text seem intentionally related to the text’s concepts and ideas, but are in fact arbitrary. Similar to the grid work, the manifestos series produce emotions and experiences and even content that are not the result of any intention on my part to create.

This award for me seems to be a recognition for this life’s work, this investigation, which I might describe as an attempt to advance the idea that art is both inseparably an objective and a subjective practice where feelings and concepts unify; this is in opposition to the conventional wisdom that art is an exclusively subjective practice. But I continue to ask, other than providing the means to make work, in what way is this investigation important to others? It is hard for me to answer this from the standpoint of others, it is for them to decide. But it is a question that I try to answer for myself. I began my professional practice at the height of two important movements, conceptual art and the black power movement. It is not often believed that the latter was a movement, and only recently has the former, conceptual art, been recognized as having the force of singularized movement. But I found myself in an undefined space in between these two because of my interest in abstract concepts on the one hand and politics on the other. Back in the day, I had been asked often by some of my friends who were invested in black power ideology why I made white art. Although disturbed by the accusation, I in fact felt it was a legitimate question; although I did not think I was making white art (art for white people, not black people), I did not know how to answer this question and usually responded by just staring into space. Why were the things I was interested in important to others, and in particular, important to black people?

After years of reflection I ultimately realized that I had what I call a temperament, a certain way of looking at the world, a type of subjectivity that did not claim itself as the defining core of art as a practice in the way that modernism does. Therefore, my own subjectivity or temperament and what it produced were vulnerable to critique. I made work that people thought was abstract and based on universalizing models, but I knew I was a political person, and had come to the conclusion that art was a cultural practice, not a universal practice that transcended cultural differences. This helped me realize that my critique of subjectivity and universalizing models came from my experiences living as a child in the Jim Crow South where I had a fascination, according to my mother, with ontological questions. (she didn’t actually say ‘ontology.’)

Even as a child I could not understand segregation as a rational construct, it seemed like a set of social rules that arbitrarily assigned privilege to white people. The way I see it now, in my work the grid system plotted the shape of objects by using numbers, but the represented object and grid system do not unify in this transaction, hence making their relationship arbitrary. One critical reading is to see this as an analogy of the faculties of perception and understanding in human beings and show that this relationship, too, is arbitrary. This means for me that knowledge is not universal but culturally driven. This gives the diverse structure of culture an important role in the production of knowledge. The importance of this is that it reveals the political dimension of abstract ideas and how important moral judgments are in the process of the acquisition of knowledge. This then answers my questions about the possible importance of my work to others, that abstract concepts have a political dimension that is derived from one’s lived experience; which is to say, in my case, that my experience as a black person who lived in the Jim Crow South who could not explain the arbitrariness as well as the ruthlessness of racism can produce abstract ideas from this experience.

I hope that it can be recognized that my work is fully invested in the world, and that it is part of the necessary moral investment that is the responsibility of art to make. Because of the incredible return of racist and white-supremacist ideology to our institutions of power that has been happening today, the question, “is art necessary?”, has never been more important. We are witnessing the most unbelievable violations of human values in our immigration policies, in acts of terror against people of color and Jews, in the police murder of our young black males, in the authoritarian takeover of our political system to protect white interests. Art is one of the few disciplines that can exercise moral authority and judgment because it is built in to the practice itself; every art gesture we make can potentially convert to a moral judgment. The artist should recognize this and practice it.