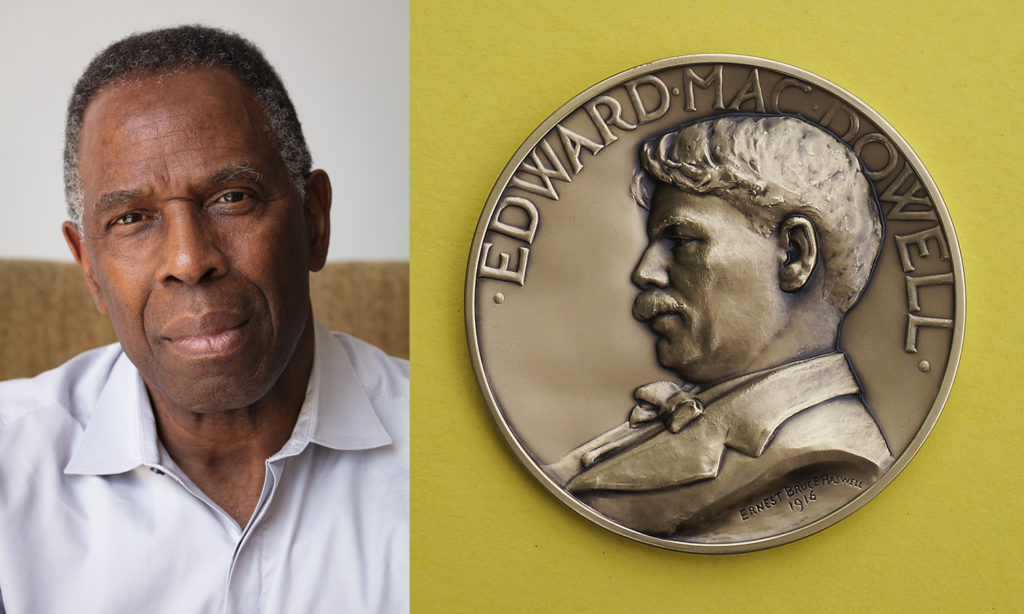 2019 Medal will be awarded to visual artist at free public event on August 11.

The 60th Edward MacDowell Medal will be presented to conceptual artist Charles Gaines during a free public event on Sunday, August 11 at The MacDowell Colony’s grounds in New Hampshire. As one of the nation’s leading contemporary arts organizations, MacDowell has awarded the prestigious medal annually since 1960 to an artist who has made an outstanding contribution to American culture.

“Charles Gaines is many things: an influential teacher, a provocative and powerful writer and curator, a talented drummer, and, of course, a highly renowned and celebrated visual artist,” said Ann Philbin, Medalist Selection Panel chair and director of The Hammer Museum at UCLA. “It is thrilling to see him receive the 60th MacDowell Medal—the latest in a long line of some of the greatest artists of our time. Charles has been a leading figure in the conceptual art movement on the West Coast for more than 40 years. His influence as an artist is exponentially enhanced by his legacy as an educator, helping generations of students find their artistic voices since the 1970s.”

MacDowell Colony Chairman, Fellow, and Pulitzer Prize-winning author Michael Chabon will present the Medal to Gaines on August 11, along with MacDowell Board President Andrew Senchak, incoming Executive Director Philip Himberg, and Resident Director David Macy. Joining Philbin on the selection panel this year were Hilton Als, The New Yorker writer and critic; Naima Keith, new vice president of education and public programs at the Los Angeles County Museum of Art; Barbara Kruger, conceptual artist and educator; and Arthur Simms, visual artist and member of The MacDowell Colony Board of Directors.

“When I received the phone call telling me I was selected, I really couldn't believe it,” said Gaines. “I think I still don't. I am familiar with MacDowell and its amazing list of Medal recipients and because of this, I feared that my imagination would be unable to handle the magnitude of such a recognition…. Being chosen by the selection panel is particularly poignant for me because they are all people I deeply respect and admire.”

Gaines, who was born in 1944 in Charleston, SC and went to Arts High School in Newark, NJ did undergraduate work at Jersey City State College. He then earned an M.F.A. from the School of Art and Design at the Rochester Institute of Technology in 1967. In the 1970s, his work shifted in response to what he would later call “the awakening.” This epiphany materialized in a series called “Regression (1973 – 1974),” in which he explored the use of mathematical and numeric systems to create soft, numbered marks in ink on a grid, with each drawing built upon the calculations of the last. He quickly became a pivotal figure in the field of conceptual art with a body of work engaging formulas and systems that interrogate relationships between the objective and subjective realms.

Gaines is a member of the CalArts School of Art faculty. He has been the subject of numerous exhibitions in the U.S. and internationally, and his work is in prominent public collections. Some of these are the Museum of Modern Art and Whitney Museum of American Art in New York, the Studio Museum in Harlem, and the Los Angeles County Museum of Art. Gaines’s work was also presented at the Venice Biennale in 2007 and 2015.

The ceremony will take place on Sunday, August 11, 2019, beginning at 12:15 p.m. at the MacDowell Colony grounds at 100 High Street in Peterborough, New Hampshire. Medal Day marks the one day each year that the Colony is open to the public. Open studios hosted by MacDowell artists-in-residence begin at 2 p.m. and end at 5 p.m., and guests can enjoy picnic lunches on MacDowell’s picturesque acreage by pre-ordering or bringing their own. This free, public arts event is made possible with the support of generous contributors and business sponsors. For more information, please visit www.macdowellcolony.org.