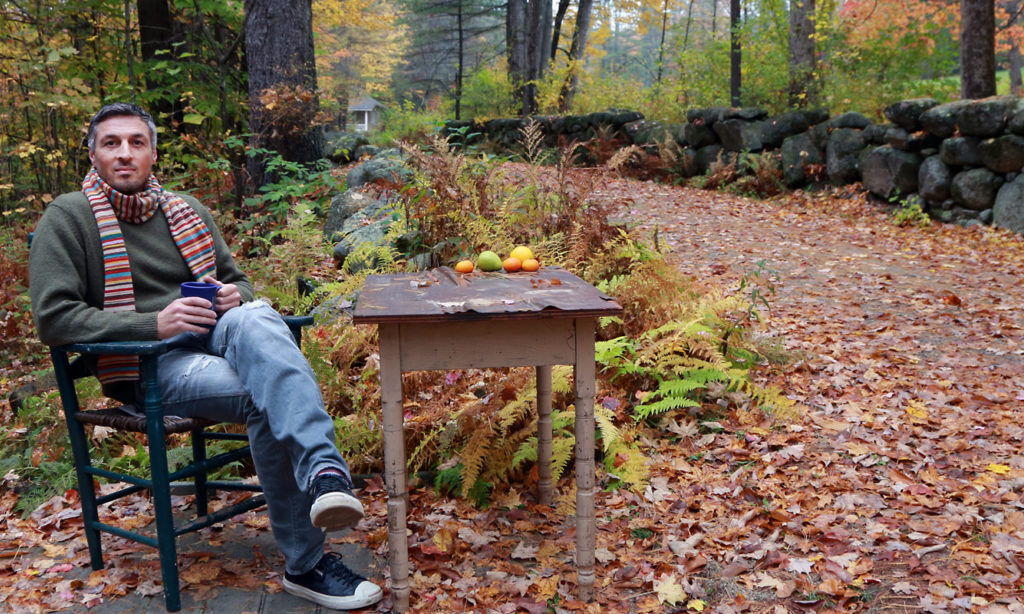 Photojournalist Finbarr O’Reilly was in residence at MacDowell this fall finishing the book Shooting Ghosts, a nonfiction account of the psychological costs of war and the relationship between individual trauma and society. His story is based on a friendship developed with his co-author, Sgt. Thomas James Brennan, during two separate embeds in 2010 and 2011 when the two spent time together in Afghanistan’s Helmand Province. Brennan is a retired U.S. Marine who fought in the Battle for Fallujah in Iraq and who was later injured during a Taliban ambush while O’Reilly was on a patrol with him. O’Reilly mentored Brennan as the latter wrote a series of articles for The New York Times chronicling his struggles with a brain injury and PTSD. The pair’s collaboration will be published next summer by Viking.

O’Reilly won the 2005 World Press Photo of the Year award, and was based in Africa as a photographer and journalist from 2001 through 2014. He is currently a writer-in-residence at the Carey Institute for Global Good. O’Reilly, one of a growing number of MacDowell Fellows pursuing the Art of Journalism, answers here a handful of questions about his MacDowell residency.

Q: Have the new challenges of funding long-form changed the way you think about or approach other opportunities like residencies, and do photojournalists have the same challenge as text-based journalists?

O’Reilly: Residencies and fellowships are a fundamental part of the long-form process, even though this is something relatively new to me. Without getting into a huge analysis of the business, photojournalism is facing a major crisis in funding and forms of expression as we grapple with shrinking editorial budgets and the explosion of digital and social media. In some ways, there are more opportunities for sharing your work, but earning a living doing so is becoming increasingly difficult as assignments become limited and staff jobs are increasingly rare and layoffs of photographers continue each year. If anything, photographers are harder hit than text journalists by the shifting media economy.

Q: What is the transition from thinking like a photojournalist to thinking like a writer like? Did you make that switch easily or with some work when you first started working on the book?

O’Reilly: Writing is a hard thing to do. I started my career as a reporter and correspondent, then moved into photography later in life (at age 35), so returning to the written word is not so unnatural for me. The transition wasn't difficult, but writing a book and the process of telling a deeply layered and hopefully meaningful story with a broad appeal is always going to be a challenge. That is especially so when you are writing about very personal and traumatic events that require a level of self-reflection and analysis, and the willingness to expose vulnerabilities that are easier to shy away from than to air publicly. But aside from the trepidation that comes with all that, the book has been a cathartic endeavor.

Q: What is the benefit of doing your type of work in an environment like MacDowell where so many other disciplines are being practiced?

O’Reilly: I’ve been able to meet with other artists and be entirely focused on the work at hand, without distractions and in a beautiful and inspiring setting. Having the opportunity to meet and exchange ideas with fellow artists from other disciplines, as well as with other writers, adds to the creative process. These different perspectives and ideas prompt fresh ways of thinking about book projects, or even challenges faced during the writing process.

At one stage I was grappling with how to articulate something about veterans and trauma and how they discuss their war experiences. I had a long conversation with Myriam [el Hajj, a filmmaker in residence at the same time] after viewing her film about Lebanese civil war veterans, and it clarified my thinking on a passage I was working on at the time. I can't recall exactly what it was now as I'm in another round of revisions, but it was helpful in guiding me to something anew, or in a way that resonated beyond my own writing.

O’Reilly: I gave my first reading of the book I'm writing to the other residents. It was nerve-wracking, but ultimately an important step to take. I learned about how to present the work to an audience in a (semi) public setting, and got some sense of how the work might resonate with a new audience.