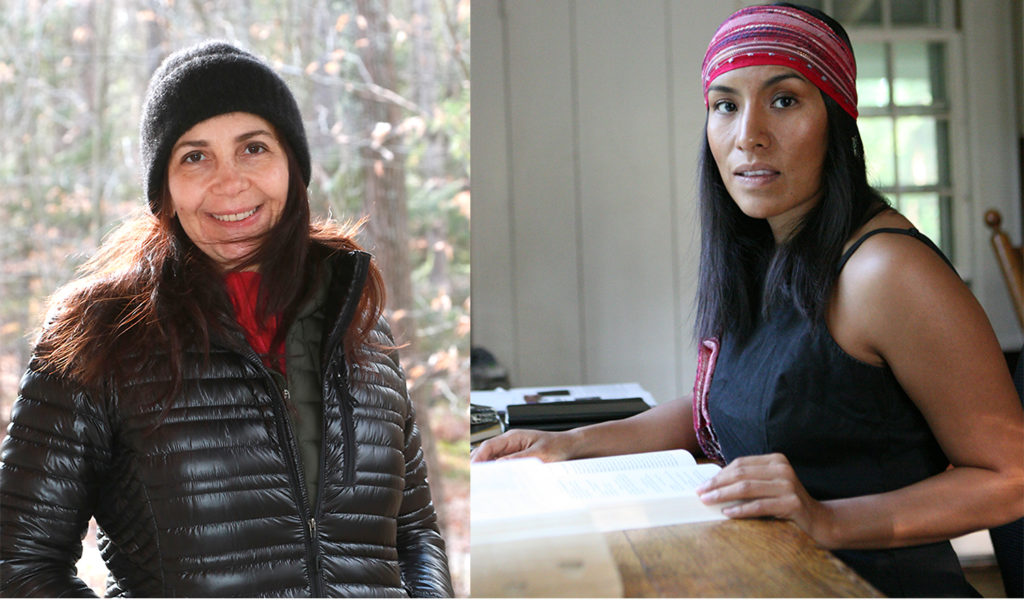 Rasha Elass (left) and Cristián Flores Garcia (right) are just two artists who've added to the richness of art-making and the residency experience at MacDowell. (images by Joanna Eldredge Morrissey and Ben Collier)

Immigrants have long played a crucial role in shaping U.S. culture, and make up an important segment of our artist community at MacDowell, bringing important and unique perspectives to art-making and the residency experience. Of the 8,205 artists that MacDowell has provided residencies for in its 111-year history, we have demographic records for 3,292, or 40 percent. Of these, 607, or 18 percent, have been immigrants, exceeding the 13.5 percent share of the total U.S. population. This accomplished and diverse group comprises artists from at least 108 different countries. Here, we shine a spotlight on just two of these extraordinary artists:

Cristián Flores Garcia
Cristián Flores García (’10) was born in Mexico, grew up in Southern California, and holds an M.F.A. from UC Riverside. Her poetry has appeared in The American Poetry Review and The Rumpus, among other publications. While in residence at MacDowell, she revised and completed new poems for her manuscript, brickEater. Three of these revised poems were subsequently published in PALABRA Magazine.

“My current project is a novel-in-poems that chronicles the life of an immigrant girl displaced in the United States who is haunted by the lies of her dead father,” said Flores García of the story begun at MacDowell. The girl grows up in Mexico City and then is brought by her parents to the United States at 14. “Her father, who became a legal resident in the U.S. and represents the only path toward legalizing the family status, gets killed in a car accident, leaving the family stranded. …. MacDowell provided me with the privacy I need to develop my writing, which I do not have at home.”

Rasha Elass
Rasha Elass (’17) has recently returned to the U.S. after working in the Middle East for over 10 years. Based in Syria, she covered the civil war as a freelance journalist for several media outlets, including Reuters, The Los Angeles Times, National Public Radio (NPR), The World (PRI / BBC Radio), and the International Business Times (IBT.com). Her articles about the war often ran without a byline for security reasons. She holds an M.S. from Columbia University's Graduate School of Journalism and an M.S. in finance from American University.

At MacDowell, Elass revised the entire manuscript of her ethnographic memoir, The Embrace of the Homeland, the story of present-day Syria as told through her war correspondent’s notebook and schoolgirl diaries. “I tell the story in the first person because I covered Syria both as an “indigenous” observer and as a highly-trained international journalist,” she said. “I was born and partly raised in Syria, before I returned there in 2005 as a war correspondent.”

Elass spent more than two years inside Syria as an undercover reporter, and was able to move back and forth into various rebel territories and “off-limit” zones because her dual citizenship meant she had a Syrian national ID to travel as a civilian without identifying herself as a journalist. “MacDowell is nothing short of an artists’ utopia,” said Elass, “[but] the most important aspect of all: The convergence of artists together for the sole purpose of creating. Art beckons art and artists inspire each other. … That a place like MacDowell continues to nurture artists in this way is no small statement.”