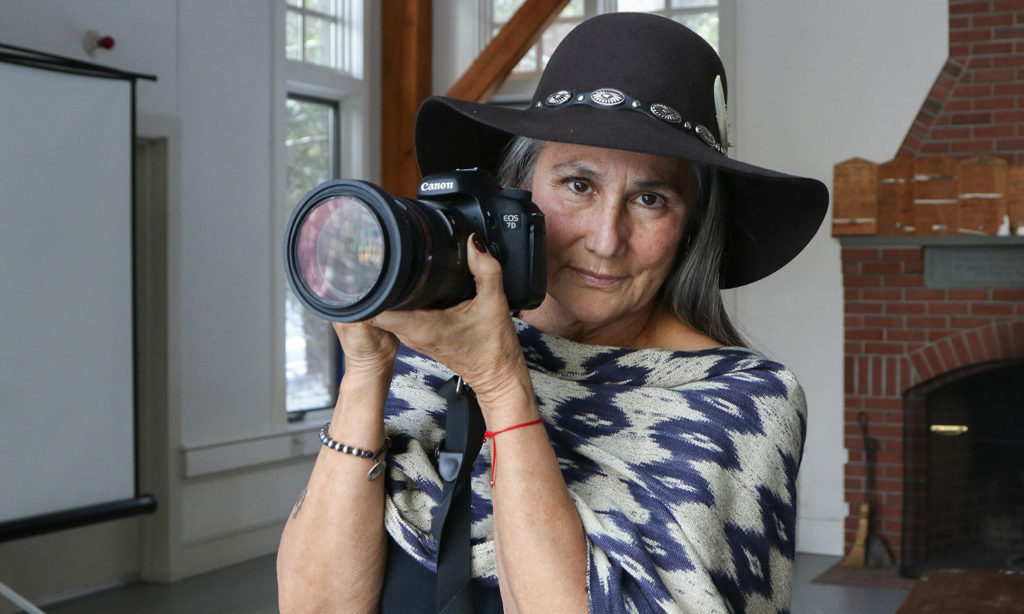 Photographer Tonita Cervantes takes a break during her 2020 residency to be captured on camera in Nef Studio.

The historic appointment of Deb Haaland as U.S. Secretary of the Interior can be traced to the Indigenous-led movement against the illegal construction of the Dakota Access Pipeline across sacred lands at Standing Rock. It was and is a powerful example of how social media, video, photography, music, art, dance, and the spoken and written word with Indigenous points of view transmitted a powerful message of peace and resistance that continues to change the world. Native cultural arts continue to dispel the crazy notions that Native Americans are extinct or mythological beings, and that it’s acceptable to be reduced to caricatures or sports-team mascots.

We demand that we will be invisible no more. And while the political changes in Washington presage more diversity and inclusion at the federal government’s highest offices, much more can be done, and places like MacDowell can help.

The stories of Native American culture need to be told, and from an Indigenous point of view. MacDowell’s efforts to partner with Native American artists, such as the Virtual MacDowell group in which I, along with a group of other Indigenous MacDowell Fellows, examined and debated the organization’s residency program in an effort to provide guidance for its accountability to Indigenous artists, can break down the barriers of prevailing ignorance, and elevate the consciousness of a country unwilling to accept its own genocidal history. It’s a small but valuable step in making sure Americans never forget that wherever they go on Turtle Island — the name used by many Indigenous peoples for North, Central, and South America — they are walking on stolen land through rivers of Native blood.

MacDowell’s recognition of its role and obligation to help right historical wrongs can’t be accomplished, though, without looking at how we, a nation with a troubled past, got here. Toward that end, a brief walk on the historical path of trauma may help illustrate the importance of acknowledging and raising Indigenous voices so they are heard by wider audiences.

Five hundred and thirty years of colonization and calculated cultural annihilation has left 130 million Indigenous human beings massacred, starved, diseased, and enslaved on the northern and southern continents of Turtle Island. Indeed, Hitler modeled his racist campaign and concentration camps and system of extermination on America’s conquest of Indigenous land and people; the aim of manifest destiny.

Beginning in 1493 in Spain, Pope Alexander VI’s issuing of his “Papal Bull” set the stage for White supremacist policies that have overshadowed this continent. This so-called "Divine Doctrine of Discovery” granted legal, moral, and spiritual authority to Christian rulers wherever they “discovered” lands inhabited by non-Christians. It legitimized European domination over the New World — by any means necessary — and became encoded in U.S. history and law.

The Indigenous population of North America was nearly exterminated by sophisticated weaponry and a belief in the inherent superiority of the White race over the course of centuries. Chief Red Cloud of the Lakota Sioux famously said of the U.S. government, “They made us many promises, more than I can remember, but they never kept but one; they promised to take our land, and they took it.” By the early 1900s, the buffalo were slaughtered and tribes incarcerated on reservations. The once great warriors and masters of Turtle Island were coerced into becoming beggars on their own homelands.

But taking the land wasn’t enough. The governments of the U.S. and Canada conspired with the Catholic Church to build boarding schools to “Kill the Indian in the child. Save the Man.” Children were kidnapped from the arms of their parents, stripped of their traditional clothing, and were shorn of their long braided hair — a symbol of their spiritual connection to Mother Earth. Children were beaten, used for slave labor, forbidden from speaking their own languages or practicing long-held traditions, starved, and sexually molested on a regular basis.

This painful legacy of torture and pedophilia committed by priests and nuns produced generations of Natives suffering from alcoholism, drug addiction, domestic violence, and suicide.

Secretary Haaland, a member of the Pueblo of Laguna, recently announced the Federal Indian Boarding School Truth Initiative. The institutions and their burial sites are being investigated. As of September 2021, we mourn the skeletal remains of more than 6,500 (and counting) innocent Indigenous children who have been exhumed from mass graves on former residential school properties in Canada and the U.S. Hundreds of such schools have yet to be investigated.

From the Indian Relocation Act of 1956 and forced sterilizations to seizures of lands by emboldened mining and oil corporations who today continue to suck Mother Earth dry, the atrocities continue to be felt. In fact, those big corporations who disregard EPA regulations enable temporary “man camps” that have led to rates of missing and murdered Indigenous women at 10 times the national average.

Despite these horrors, the myth of European settlers birthing this great nation on their own persists and completely disregards the culture and contributions of Native Americans. And now, as Critical Race Theory curriculum in public schools is defiantly opposed and rejected, further solidifying ignorance and racism, it is more important than ever for arts and cultural institutions to become engaged.

What if students learned that the Navajo, the Cherokee, and the Comanche, who served as code talkers in WWII, were instrumental in saving the free world? American Indians who were once punished for speaking their Native tongue in boarding schools using their traditional tribal language to defeat the Nazis. What if students learned that our system of government was borrowed from the Iroquois League of Nations or that sign language was developed by Native Americans as a communication tool between peoples with different spoken languages? What if people of all ages were able to read, listen to, watch, and experience art created by Native American artists at venues all across the country, imbuing American culture with new possibilities?

An artist residency can provide the space to help Indigenous artists focus on making sure those truths are told by Native voices through theatre, visual art, film, literature, dance, interdisciplinary art, and design. It can fill the hollow chambers of White-controlled oppression. The ceremonies and the storytellers, the Native language speakers, the writers, the healers, the fire keepers, the water keepers, the hunters, the gatherers, the tanners, the craft makers, the quilt makers, the jewelry makers, the sign makers, the singers, the drummers, and the fancy dancers that have survived against all odds can help fill those empty spaces if all people take notice.

The Lakota people say, “Mitakuye Oyasin,” which means, “To all my relations.” The understanding is that those relations include all humans, the four-legged creatures, the plants, the trees, the sky, and the first medicine of life — water. We do not exist as I, we exist as one. To embrace the Indigenous philosophy of “humility, respect, community cooperation, and living in harmony with the natural world,” is to understand how best to serve, encourage, and nurture Native American artists.

MacDowell can heed and lift up the messages of Native artists, and work with us to topple the walls of conventional art forms, and recognize the unique traditional expressions of Indigenous communities. It has begun to see the value in reaching out to the Abenaki relatives of the people whose land it occupies, and now must see the connection between the survival of the human species and the wisdom of our Indigenous ancestors.

Voices from deep within the Indigenous world are raising the flag, demanding radical political, social, cultural, and environmental change. And the arts, with the help of established institutions such as MacDowell, can help.

We Exist! We Resist! We Rise! We will be invisible no more!

Tonita Cervantes is a social activist and documentary photojournalist. Most recently she documented the divisive and explosive violations of human rights against migrants seeking asylum along the U.S.-Mexico border. With her photographs, interviews, video short-documentary, and first-hand account of her experience at Standing Rock, she is developing materials for educational purposes to be shared with communities both Native and non-Native.