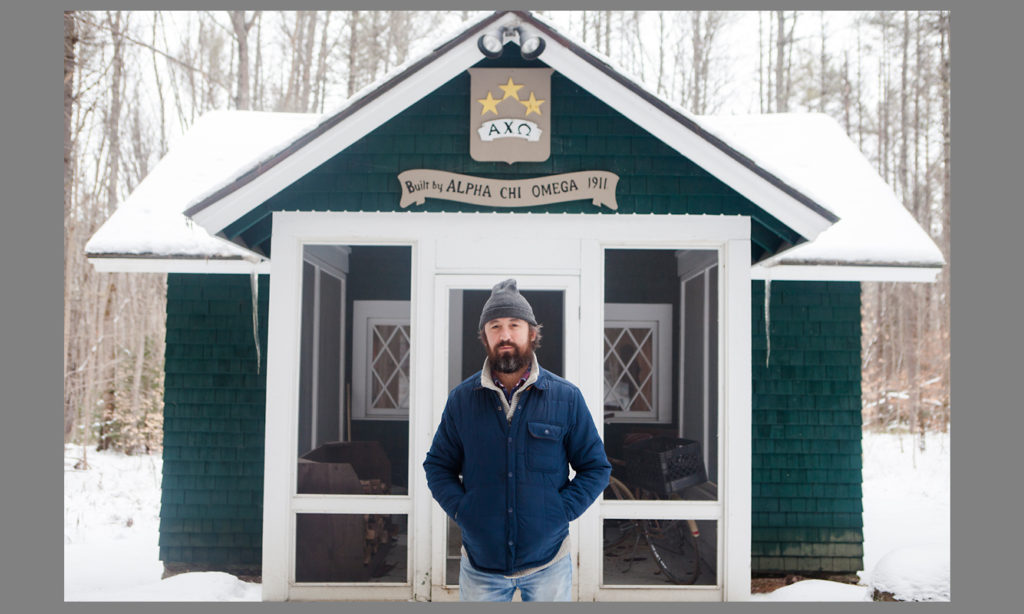 Deep reporting in writer's project about U.S.-Canada border is one of 15 fellowships assisted by MacDowell long-form journalism push.

Journalist Porter Fox arrived at The MacDowell Colony late last January armed with hundreds of stories and countless historical vignettes compiled for a book about the almost-4,000-mile line drawn between the U.S. and Canada. Entitled Northland, it’s both a journalistic historical study of the making of the longest international border in the world as well as a cultural study of the people who live there now. The first-person narrative about the state of the border today will look at its security, economy, and the communities that exist on either side of it, weaving in fascinating historical segments along the way, starting with Samuel de Champlain in the east and continuing right up to the founding of the State of Washington where the border vanishes into the Pacific.

Fox is one of 15 nonfiction writers over the past year whose residencies have been supported by MacDowell’s Art of Journalism Initiative. It’s part of MacDowell’s commitment to offer writers engaged in deep reporting and complex narrative the uninterrupted time and stimulation that comes out of a creative artistic community.

The initiative has raised more than half its $4.5 million goal to endow 20 journalism fellowships as resources for long-form projects in a changing media climate that favors fast news. All new gifts will be matched up to $1 million by a special challenge grant from the Calderwood Charitable Foundation. So far, several fellowships have been created: the John S. Carroll Fellowship, the Markos and Eleni Kounalakis Fellowship, the Sylvia Canfield Winn Fellowship for Environmental Journalism, and there are three Anne Cox Chambers Fellowships to recognize her early support. The Calderwood Foundation also endowed a fund to provide small project grants to cover research and travel costs based on need.

Research for Fox’s book has taken him from Quoddy Narrows at the mouth of the Bay of Fundy as far west as Spokane by foot, canoe, freighter, small plane, and car.

“The geographic progression followed almost precisely the chronology of the development of the U.S. and the border,” he says. “By the time I got to the Great Lakes, I was writing about the fur trade and that period, in the Great Plains I’ll be talking about the end of the Age of Native Americans, and in the Rockies I dig into westward expansion.”

With just a little more of the border to examine this summer and early fall, he figures he’ll spend October through next spring writing and revising. A finished narrative should be ready by next May. “The scope of this project is massive,” Fox says. He spent his three weeks at MacDowell completing a large section of writing and organizing the large arcs of the story. With tens of thousands of square miles huddled against the border to report on, that was no small feat.

“I hit the ground running when I got home from MacDowell,” says Fox. “I returned totally inspired and with a clear vision of what I want to do.”

This is Fox’s second dive into long-form journalism. His first, Deep: The Story of Skiing and the Future of Snow, was a narrative nonfiction look at how climate change could wipe out most of the snow and ice on the planet in the next century, affecting mountain communities and everything downstream of them.

“I was a fiction writer first, and worked at newspapers and magazines as a day job,” says Fox. “I never considered the journalism I was doing an art form. It was just something I did to pay the bills. But I continued to work at it alongside fiction, and when I figured out what narrative nonfiction was, I realized it was something I had been trying to do for a long time.”

Fox attended the Nieman Narrative Journalism Conference several times and started incorporating the techniques of fiction into his nonfiction. Then he started Nowhere magazine and wrote for The Believer, with Heidi Julavits (’00, ’10, ’12, ’13) as his editor.

“Heidi was the first editor to take a story of mine and actually ask me to make it longer,” he says. “I couldn’t believe it and I dug into it. The next story of mine that she edited ended up in Best American Travel Writing. I have been writing long-form narrative journalism full-time since then.”

“Writing long-form journalism is like writing a novel,” says Fox. “You have to keep a tremendous amount of information in your head at the same time. You have to see echoes, circles, and correlations from one chapter to the next.... That takes tremendous concentration and no distraction.... You can do that at MacDowell.”

“I know a lot of people say this, but my experience at MacDowell was very tangibly a life-changing event for me. It validated sacrifices and gambles I took with my career — to try to create instead of just report.”