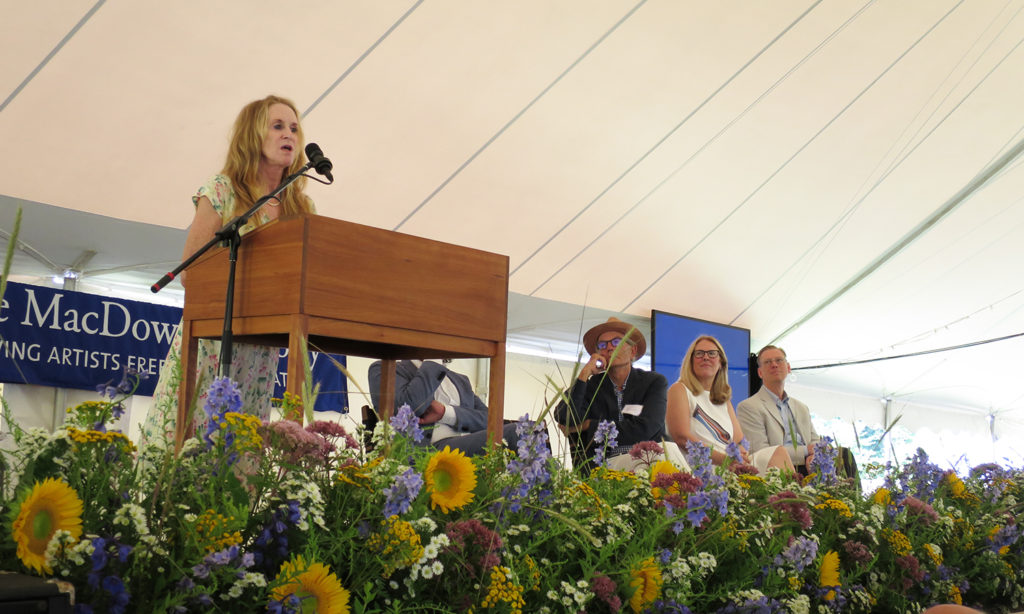 There’s no way I can speak as eloquently about David’s work as Michael. Michael you really hit it out of the ballpark so (laughs) I’m going to talk about David the person.

My story with David began in 1980; I saw Eraserhead and was blown away. How could someone not be. I tracked him down and he agreed to be interviewed. So we met at a coffee shop on Sunset Boulevard called Ben Franks and during that period in David’s life he spent a portion of everyday in a coffee shop, basically looking at people. He’s a very good observer. And that day he had a slice of lemon meringue pie and coffee, of course, and he seemed very shy and humble and quiet and unusual.

So, we stayed in touch and I wrote something about him and he seemed to like what I wrote. So after that ... when people would contact him on wanting to do an article on him he often suggested me as a writer. When we next met he was working on The Elephant Man and his next film, Dune, shot in Mexico. After that all of his films were shot in the U.S. and he always invited me to the sets and I spent a week in Wilmington, North Carolina on the Blue Velvet set and I really got to watch him work and I had no idea why he was so nice to me but he really was (laughter).

Since we met David’s stature as an artist has grown steadily and now’s there’s a lot written about him. Really. I think there are hundreds of books and articles. And he’s often complained about how much wrong information there is about him out there. So about two and half years ago I said, ‘David why don’t we write a book about your life that gets everything right’ and he thought that was a good idea, and we wanted to have all the facts and figures of his life in there correctly, but I also felt it was important that his voice be a prominent part of the book. So we came up with an unusual structure. I would do a conventional chapter based on research and interviews and David would read it and then he would write a chapter in response to it. So he was kind of writing, he was responding to the way people saw him, and what his experience of that personal part of his life was.

So, I did more than a 100 interviews for the book and in doing all that deep research on David a really surprising thing happened. The closer I got the better he looked. (laughter) I think a big part of his brilliance is rooted in how loving he is and how much love he generates in the people around him. I can’t count the people that said to me “I owe my career to David.” He’s just been really generous just as he has been generous to me. He gives people chances and you know there was one guy who was his driver on Twin Peaks and five years later the guy has his own production company. (laughter) David’s really generous!

So I’m going to close by reading two short excerpts from David’s chapters in the book. The first one I chose because I think it gives a little bit of insight into one of the foundation of his work and I should say there’s no way I can read these stories as well as he could tell them. He’s a really good storyteller and very funny, but I’ll do my best.

“That ‘50s small town thing, it’s different, and to catch that mood is important. It’s dreamy, that’s what it is. The ‘50s mood isn’t completely positive, though, and I always knew there was stuff going on. When I was out after dark and going around on my bike, some houses had lights on inside that were kind of warm, or I knew the people who lived in the house. Other houses, the lights were dim, and with some houses they were almost out. There were lights on, but the house was dark, and I didn't know the people who lived there. And I’d get a feeling from these houses of stuff going on that wasn’t happy. I didn't ever dwell on it, but I knew there were things going on behind those doors and windows.

I was out one night with my brother and we were down at the end of the street. Everything is lit up at night now, but in the ‘50s in small towns like Boise, there were streetlights, but they were dimmer and it was much darker. It makes night kind of magical because things just go into black. So, we were down at the end of this street at night and out of the darkness came this nude woman with white skin. Maybe it was something about the light and the way she came out of the darkness, but it seemed like her skin was the color of milk, and she had a bloodied mouth. She couldn't walk very well and she was in bad shape, and she was completely naked. I’d never seen that before, and she was coming towards us, but not really seeing us. My brother started to cry, and she sat down on the curb. I wanted to help her but I was young and didn't know what to do. I might’ve asked, ‘are you okay? What’s wrong?’ But she didn't say anything. She was scared and beat up, but even though she was traumatized, she was beautiful.”

This second excerpt is from a chapter called “Next Door to Dark” it covers the years 1993 to 1997, which is when he was making Lost Highway. I picked this because it gives a little glimpse of how David feels about show business, which is not great and it’s also a good example of how David talks about people. You know he has this image like he’s kind of a kooky dreamer in dreamland, but he’s actually a very astute observer of people and he doesn’t miss much. But the way he experiences people is always with compassion and affection and absolutely no judgement. That’s one of the things I love about him.

“Around the time I was trying to get Lost Highway made I was also trying to get this thing called Dream of the Bovine going. Dream of the Bovine is an absurd comedy and although the script needs a lot of work, there are things in it I really like. Harry Dean Stanton and I went up to talk to Marlon Brando about the two of them doing it together but Brando hated it. He looked me in the eye and said ‘it’s pretentious bullshit,’ and started telling us about these cookies made out of grass that grows in saltwater that he wanted to promote. (laughter) Then he told us about a car he wanted to build that had this bladder underneath that would cook this grass and make fuel, like the car would digest the grass. (laughter) You could never tell if Marlon was putting you on or he was serious.

“The thing about Marlon was he just didn’t give a shit about anything. Every business has bad behavior going on, but there’s something about this business, with all the egos and lies and back-stabbings that makes you want to do something else rather than be in it. For sure, if anybody had that feeling it was Brando. He played the game for a while then he couldn’t do it anymore because it made him sick, and he’d reached a point where he just wanted to have fun. I think he was having fun, too. This was around the time he went on The Larry King Show and kissed Larry King.

“He came up to the house a couple of times. One time he came by himself, I guess he’d driven himself, and he came in, big, you know, just big, being Brando in this house. It made me a little nervous because I didn’t know why he was here or what we were supposed to do. I figured I’d make him a coffee, but right after he got here he said, ‘so, you got anything to eat?’ I thought oh my god, (laughter) but I said ‘Marlon, I don’t know, let’s go look.’ There was one tomato and one banana in the kitchen and he said ‘okay that will do,’ (laughter) so I got him a plate and a knife and fork and we sat down and started talking. Then he says ‘you got any salt?’ So he was salting the tomato and cutting it up and eating it while we were talking. Then Mary Sweeney came in (that was David’s wife at the time) and Brando says ‘Mary, give me your hand, I want to give you a gift,’ so she put her hand out. He’d made a ring out of the Del Monte sticker that had been on the tomato and he slipped it onto her finger.

“Marlon was dressing in drag now and then during that period, and the thing he really wanted to do was dress up as a woman and have Harry Dean dress up as a woman, and the two of them would have tea together and ad lib while they were drinking tea. Think about that. (laughter) It would’ve been -- incredible! All I’d have to do is turn the camera on, but Marlon chickened out. It drove me nuts! (laughter) He should’ve done it!

“I showed Lost Highway to Brando after I finished it but before it was released. We rented this theater and told the owner Brando was going to come to see this film and the theater owner was pretty pumped. So we get this thing set up and Brando comes into the theater by himself and they have all these treats out for him. He’s got a burger with him but he fills his pockets with candy anyway (laughter) and goes into the theater eating candy with his burger. He called me later and said, 'It’s a damn good film but it won’t make a nickel.' It was good. He liked it. A lot of people thought Lost Highway wasn't a commercial choice and I guess that’s true. Siskel and Ebert gave it two thumbs down so I got the guy at October Films to run a big ad that had an image of two thumbs down, and text that read ‘two more great reasons to see Lost Highway.’ " (laughter)

So, I’m glad you’re giving this medal to David because he deserves it. He’s a great artist. (applause)