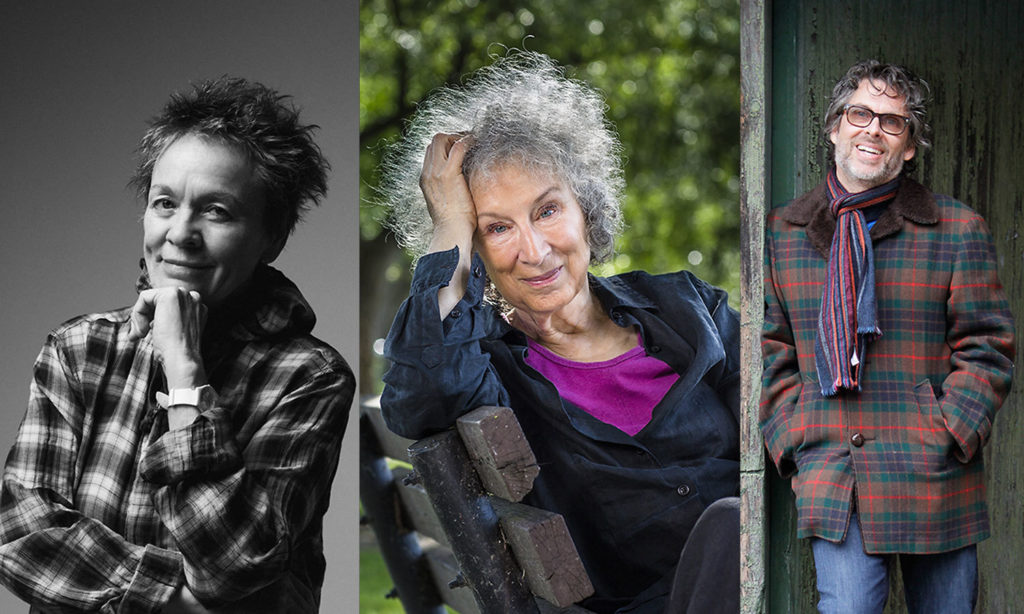 Laurie Anderson and Margaret Atwood will join Michael Chabon on stage for a discussion art and culture on December 9th in Chelsea.

The MacDowell Colony’s Chairman’s Evening on Monday, December 9, promises provocations on art and culture in these polarized times with three creative icons.

Multimedia artist, composer, and performer Laurie Anderson and best-selling novelist, poet, and educator Margaret Atwood will join novelist, screenwriter, and MacDowell Colony Chairman of the Board Michael Chabon on stage at Glasshouse Chelsea on Monday, December 9, 2019 where they will share their insights on art, creativity, and culture. The MacDowell Colony, one of the nation’s leading contemporary arts organizations, celebrates 112 years of fueling contemporary culture by hosting its seventh Chairman’s Evening. Open by invitation to MacDowell supporters, the intimate event delivers a front row seat to the type of unscripted, interdisciplinary discussions that happen over dinner every night between artists-in-residence on the organization’s 450-acre New Hampshire property.

“I can’t think of two more exciting artists – and social commentators – who’ve demonstrated the versatility and vitality Laurie Anderson and Margaret Atwood have over the arcs of their individual careers,” says Michael Chabon. “From her groundbreaking performance and film work, to her composing and recording careers, and work as a poet, Laurie Anderson defines artistic experimentation and creative derring-do. Margaret Atwood likewise has always pushed and then burst through creative envelopes, and she’s done it in her novels, short stories, essays, poetry, teaching, and even as she fights for environmental and social justice. What could be more fun, and more important right now, than sitting down for a conversation about culture with these two brilliant women?”

The stimulating conversations that result when resident MacDowell artists working in seven different disciplines gather at the end of the day are a valuable component of the MacDowell experience. MacDowell’s open application policy offers more than 300 artists each year a full fellowship that includes a private studio, meals, living accommodations, and stays from two weeks to two months.

Invitations for Chairman’s Evening are first offered to those who have supported MacDowell’s residency program at the $2,500 level or above in 2019. There are very limited seats available for new contributors. The evening is limited to 130 guests, so reserve your space early.

Laurie Anderson is one of America’s most renowned – and daring – creative pioneers. She is best known for her multimedia stage presentations and innovative use of technology. As writer, director, visual artist, and vocalist she has created groundbreaking works that span the worlds of art, theater, and experimental music. Her recording career, launched by “O Superman” in 1981, includes the soundtrack to her feature film Home of the Brave (1985) and Life on a String (2001). Landfall, a collaboration with Kronos Quartet, was released last year. From being appointed NASA’s first artist-in-residence in 2002 to having her archive on a 15-year rotation at Mass MoCA beginning in 2017, Anderson’s visual and multimedia work has been presented and performed at film festivals and in museums around the world, and she has published seven books. Some of Anderson’s honors include the 2007 Dorothy and Lillian Gish Prize, the Pratt Institute’s Honorary Legends Award in 2011, and the Yoko Ono Courage Award for the Arts in 2016. In addition to making art in New York, she continues to work with the arts activist group The Federation, which she co-founded in 2017.

Margaret Atwood, whose work has been published in more than forty-five countries, is the author of more than 50 books of fiction, poetry, critical essays, and graphic novels. Her latest novel, The Testaments, was published in September 2019. It is the long-awaited sequel to The Handmaid’s Tale, now an award-winning TV series. Her other works of fiction include Cat’s Eye, finalist for the 1989 Booker Prize; Alias Grace, which won the Giller Prize in Canada and the Premio Mondello in Italy; The Blind Assassin, winner of the 2000 Booker Prize; The MaddAddam Trilogy; and Hag-Seed. She is the recipient of numerous awards, including the Peace Prize of the German Book Trade, the Franz Kafka International Literary Prize, the PEN Center USA Lifetime Achievement Award, and the Los Angeles Times Innovator’s Award. She lives in Toronto.

Michael Chabon is a MacDowell Fellow (14x, 1996 – 2017) and the Chairman of The MacDowell Colony Board of Directors and the bestselling and Pulitzer Prize-winning author of the novels The Mysteries of Pittsburgh, Wonder Boys, The Amazing Adventures of Kavalier & Clay, Summerland, The Final Solution, The Yiddish Policeman's Union, Gentlemen of the Road, Telegraph Avenue, and Moonglow; the short story collections A Model World and Werewolves in Their Youth; and the essay collections Maps and Legends, Manhood for Amateurs, and Pops: Fatherhood in Pieces. He lives in Berkeley, California, with his wife, novelist Ayelet Waldman, and their children.

Contemporary for 112 years:
Composer Edward MacDowell and pianist Marian MacDowell, his wife, founded The MacDowell Colony in 1907 to nurture the arts by offering creative individuals of the highest talent an inspiring environment in which to produce enduring works of the imagination. In 1997, MacDowell was honored with the National Medal of the Arts. Each year, MacDowell welcomes more than 300 architects, composers, filmmakers, interdisciplinary artists, theatre artists, visual artists, and writers from across the United States and around the globe. More than 15,000 residencies have been awarded in the last 112 years. Recipients have included Ayad Akhtar, James Baldwin, Ta-Nehisi Coates, Ellen Driscoll, Louise Erdrich, Osvaldo Golijov, Cathy Park Hong, Dee Rees, Colson Whitehead, and Julia Wolfe. Pulitzer Prize-winning author Michael Chabon is the Chairman of MacDowell’s Board of Directors.