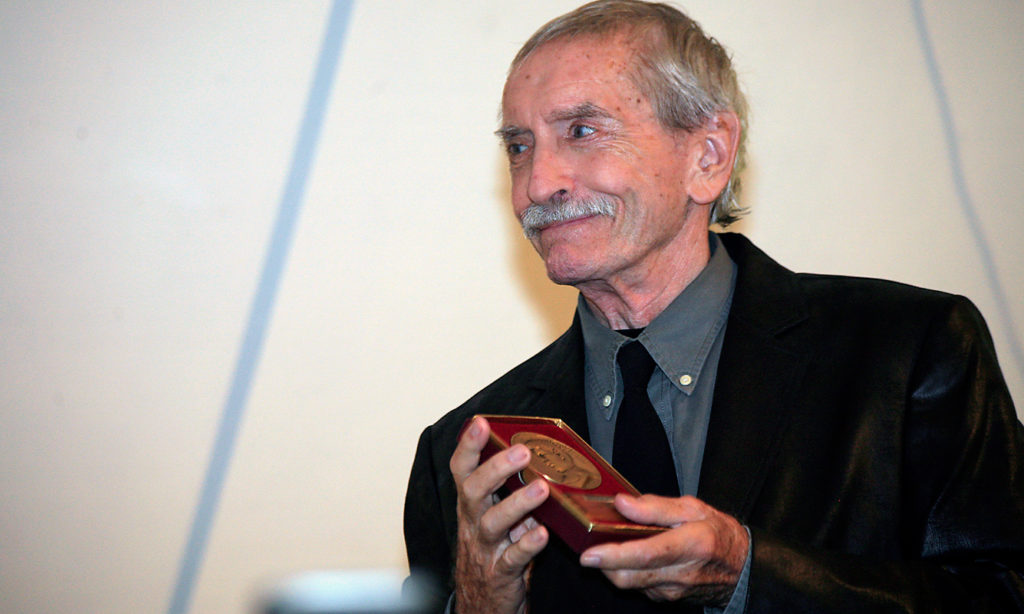 Albee will be on hand to accept the award at The MacDowell Colony in Peterborough, New Hampshire, on Sunday, August 14th.

Peterborough, NH -- April 12, 2011 -- The MacDowell Colony, one of the nation’s leading artist residency programs, will present its 52nd Edward MacDowell Medal to renowned playwright Edward Albee on Sunday, August 14th. Since 1960, The MacDowell Medal has been awarded annually to an individual artist who has made an outstanding contribution to his/her field. The award is rotated among the seven artistic disciplines practiced at MacDowell; this will be the third time the Medal has been awarded to a playwright. Albee joins an impressive list of past Medal recipients, including playwrights Thornton Wilder (1960) and Lillian Hellman (1976), visual artist Georgia O’Keeffe (1972), composer Leonard Bernstein (1987), architect I.M. Pei (1998), filmmaker Stan Brakhage (1989), interdisciplinary artist Merce Cunningham (2003), and writer Alice Munro (2006).

“I’m gratified and delighted by the honor of receiving the MacDowell Medal, especially since they’ve given so few of these awards to playwrights!” said Albee, who has received three Pulitzer Prizes and three Tony Awards over the course of his illustrious career. In naming him the 2011 Medalist, André Bishop, Artistic Director of Lincoln Center Theater and chairman of this year’s Medalist selection committee, said, “Edward Albee was chosen for a clear and obvious reason: He is a towering presence in the American theatre. His plays have influenced our culture and our discourse for more than 50 years. He has always been a supportive friend to younger writers, and he is renowned as a teacher and mentor. He constantly challenges audiences in much the same way that he challenges himself, writing with elegance, rigor, wit, and unsentimental emotion. His plays are performed all over the world and are prized by audiences who want the theatre to be bracing, not bromidic. He continues to write extraordinary plays, and he is an inspiration to all.” Joining Bishop on the selection committee were writer Peter Cameron, a MacDowell Colony Fellow and board member; James Houghton, the Richard Rodgers Director of the Drama Division at Juilliard and Founding Artistic Director at New York’s Signature Theatre Company; MacDowell Colony Fellow playwright and author Honor Moore; Pulitzer Prize-winning playwright Lynn Nottage; and Artistic Director for Hartford Stage, Michael Wilson.

Called, “the leading playwright of his generation” by The New York Times, Albee has been rousing audiences for almost half a century with his forthright explorations of the stark realities surrounding such issues as violence, sexuality, identity, and death in American society. Widely celebrated for his masterful use of language and his unwavering dedication to experimenting with form and mining the depths of the human experience, Albee has been a driving force in the development of American theatre.

Born in 1928, Albee wrote his first play, The Zoo Story, at the age of 30. The author of a total of 30 plays to date, he won his first Tony Award in 1963 for his most recognized work, Who’s Afraid of Virginia Woolf? — a sharp-witted portrayal of the trials and tribulations of marriage. His other plays include The Sandbox (1959); A Delicate Balance (which earned him his first Pulitzer, and a Tony Award, in 1967); Seascape (1974), his second Pulitzer Prize winner; Three Tall Women (for which he won a Pulitzer in 1994); and The Goat or Who Is Sylvia?, a 2002 Tony Award and Drama Desk Award winner.

A member of the Dramatists Guild Council, Albee was awarded the Gold Medal in Drama from the American Academy and Institute of Arts and Letters in 1980. He received the Kennedy Center Honors and the National Medal of Arts in 1996, and in 2005, the American Theatre Wing presented him with a special Tony Award for Lifetime Achievement. Last month, he received the 2011 American Artist Award from Arena Stage in Washington, D.C., where the Edward Albee Festival — a two-month tribute series featuring staged readings of all of his work — is currently taking place.

Also known for his dedication to fostering the development of artistic talent, Albee is the president of The Edward F. Albee Foundation, a summer residency program for writers, composers, and visual artists in Montauk, New York. He has taught at numerous universities, and is currently a Distinguished Professor of Playwriting at the University of Houston.

In its 103-year history, MacDowell has provided Fellowships to more than 300 playwrights, including Thornton Wilder, Paula Vogel, Wendy Wasserstein, Terrence McNally, Suzan Lori-Parks, and James Lapine. These dramaturges are part of the more than 6,500 artists from all disciplines who have worked at the Colony since its founding in 1907.

Beginning at 12:15 p.m., this year’s Medal Day award ceremony will take place at the Colony (located at 100 High Street in Peterborough), which will be open to the public for the festivities and celebration. Following the award ceremony, guests can enjoy picnic lunches on Colony grounds by pre-ordering Medal Day picnic lunch baskets (available for sale at www.macdowellcolony.org beginning in June) or by bringing their own. Open studio tours hosted by MacDowell artists-in-residence begin at 2:00 p.m. and end at 5:00 p.m. This will be the first Medal Day for MacDowell’s new Chairman of the Board, Michael Chabon, and the second for President Susan Davenport-Austin — both of whom assumed office in 2010.

There is no charge to attend Medal Day. The MacDowell Colony is grateful for the support of our Medal Day corporate partner, Lincoln Financial Foundation.

Situated on 450 acres of fields and woodland, The MacDowell Colony welcomes more than 250 composers, writers, visual artists, theatre artists, architects, filmmakers, and interdisciplinary artists from the United States and abroad each year. The sole criterion for acceptance is talent; a panel in each discipline selects Fellows. A registered National Historic Landmark, The MacDowell Colony was awarded the National Medal of Arts in 1997.