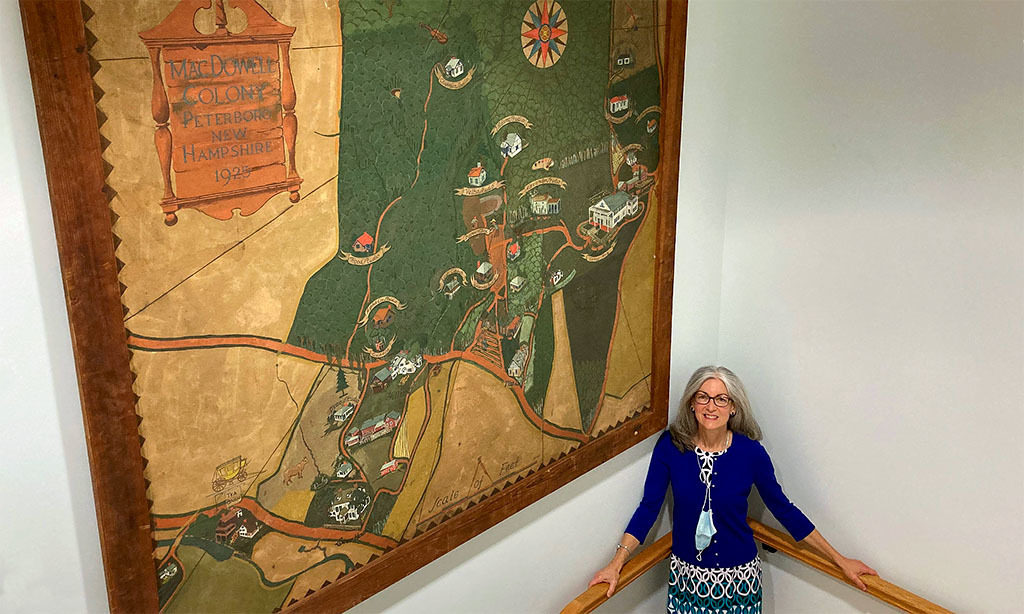 This 1925 painting by Mary McAndrew Stonehill had been languishing in a storeroom until MacDowell Librarian Colette Lucas found it. It now hangs in a stairwell in our main hall. 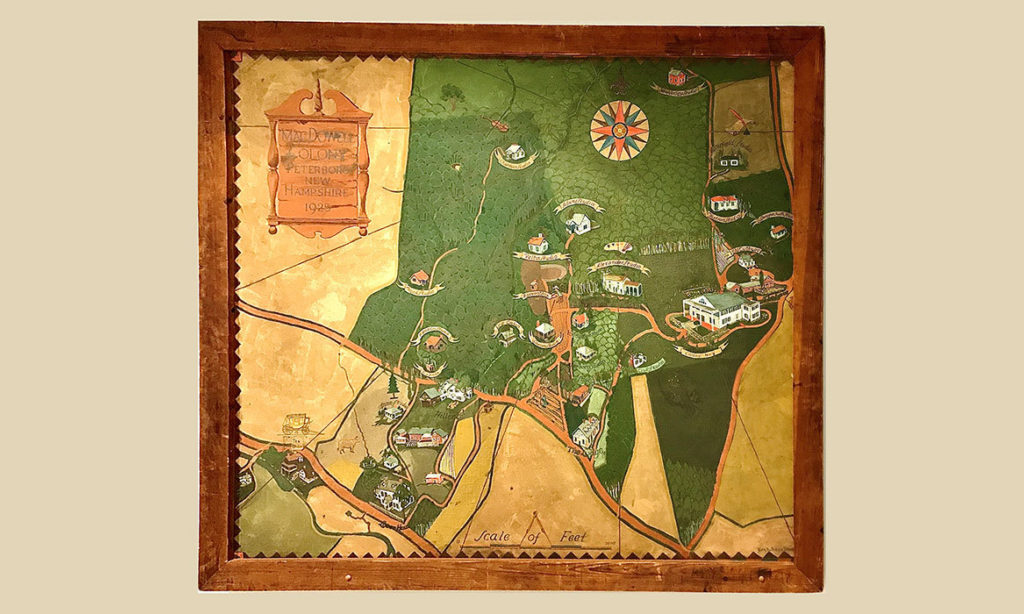 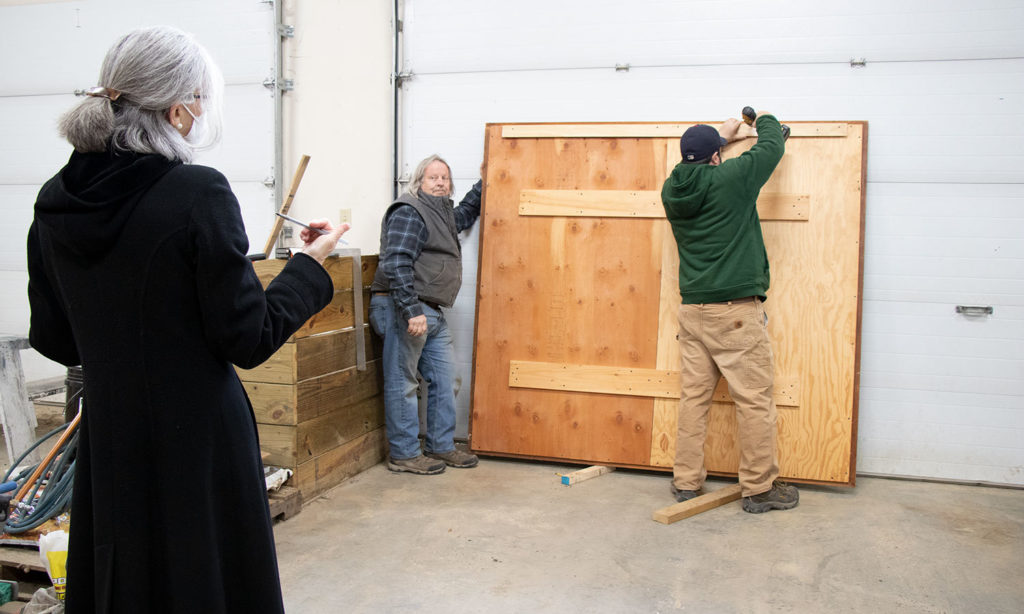 J-Crew's Jamie Sargent attaches a hanging bracket to the back of the frame as Colette Lucas and Maintenance Foreman John Sieswerda talk about the work's history. 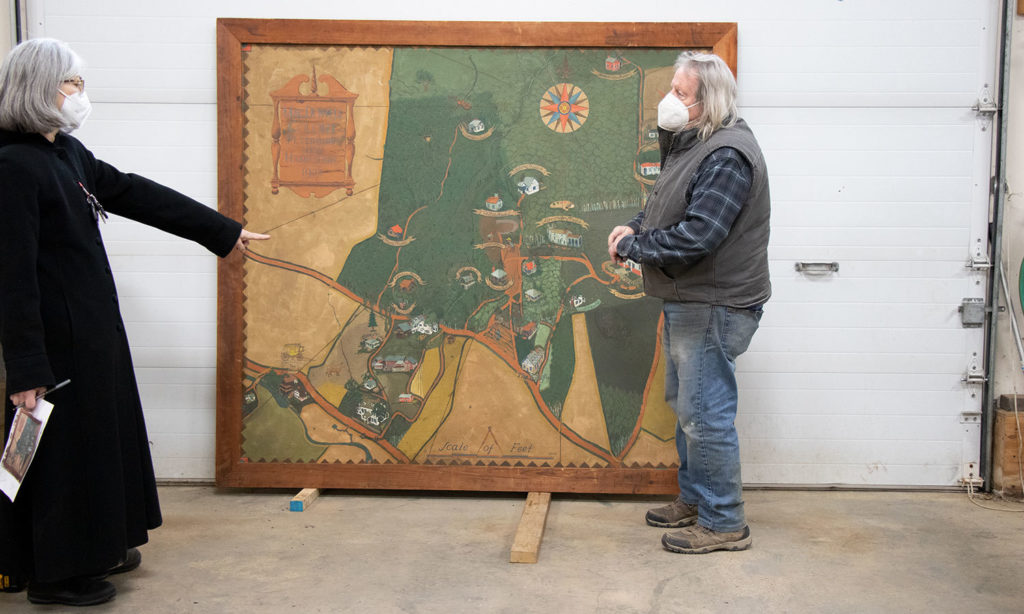 Just as the artist residency was approaching the end of its second decade, many of the depicted studios bore different names than they do today. 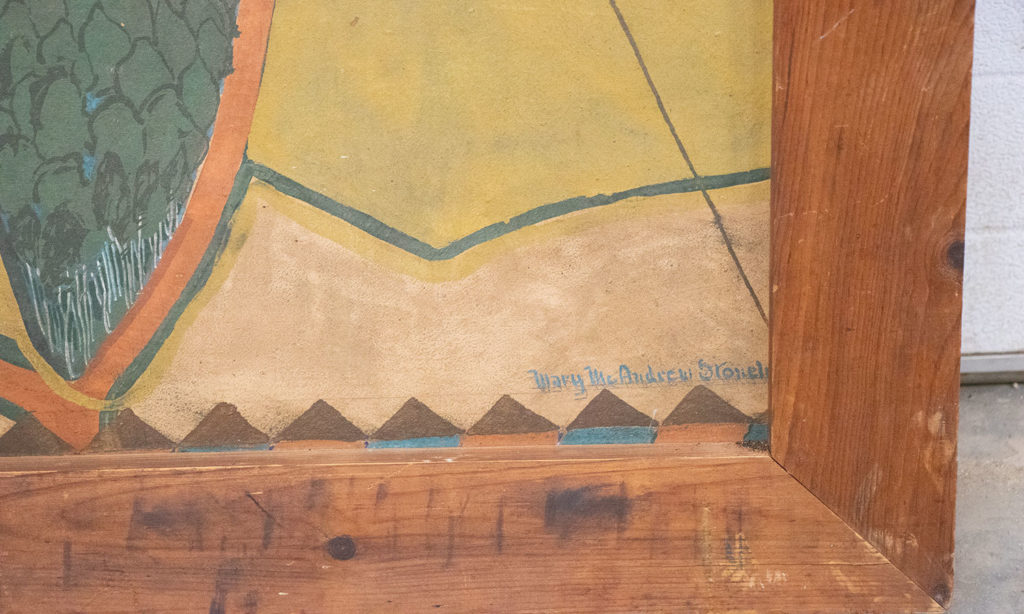 The painting was completed by muralist Mary McAndrew Stonehill in MacDowell's Lower House when part of it was used as a studio. 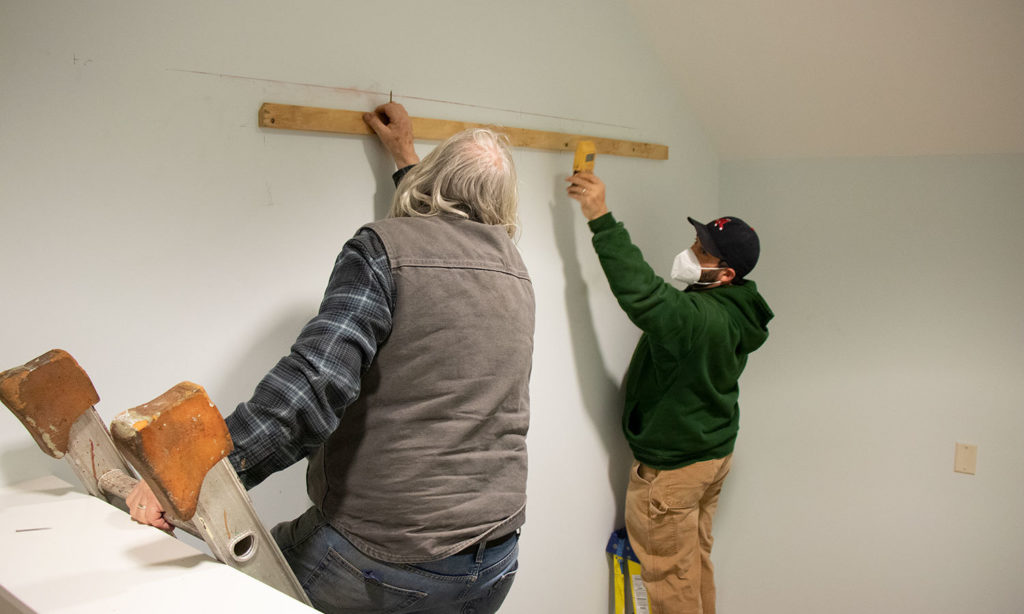 J-Crew levels the hanging bracket on the wall in the main hall to receive the large painting. 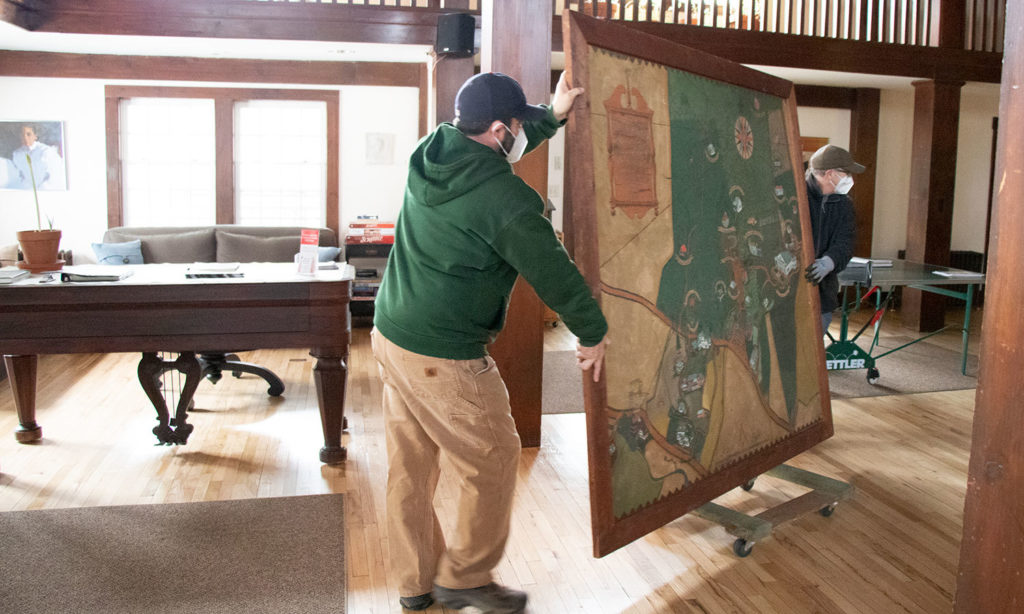 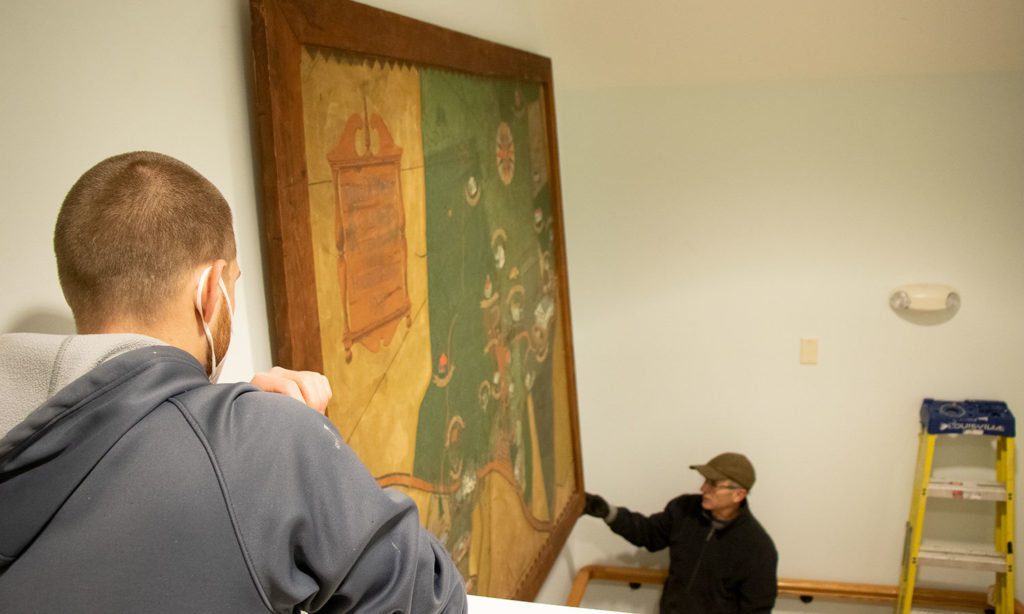 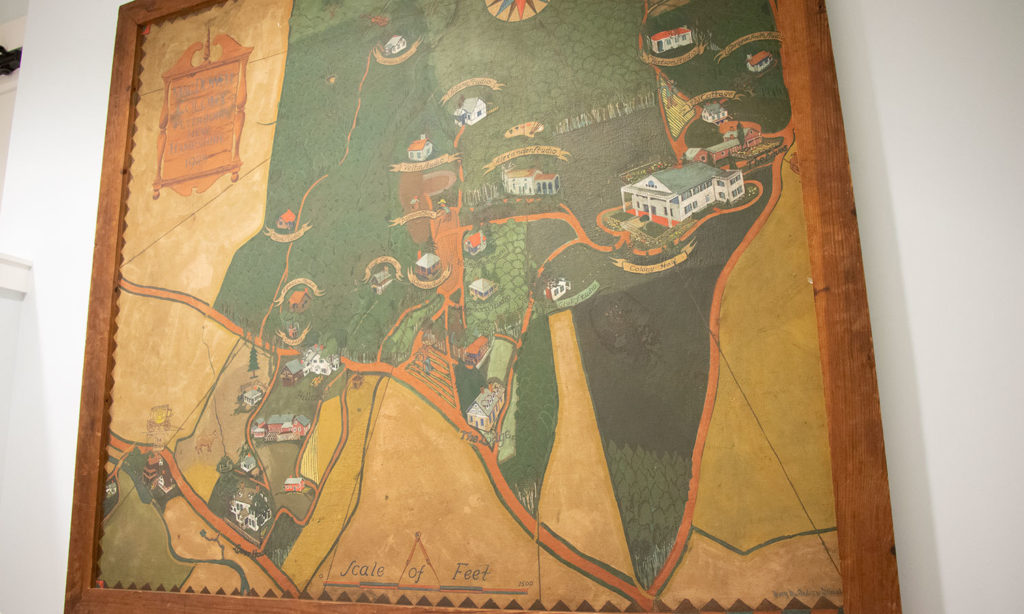 The work hangs in its new home, an intriguing reminder of MacDowell's earliest days.

A question about an early 20th-century photographer and a 12-year curiosity about a map have led to a thrilling discovery at MacDowell.

Back in October of 2009, Colette Lucas, librarian for MacDowell’s James Baldwin Library, came across a curious black-and-white image in MacDowell’s photo archive of what appeared to be an early map of the residency grounds. Unfortunately, there was no credit on the back of the photograph, nor was there any explanation of its subject matter. Lucas wondered who created the map and if it was a drawing, because that might mean it was stored in a flat file with other property maps.

The only clue, or actual fact, that could be gathered from the photo, was that the image portrayed a map of the MacDowell grounds in 1925.

Eight years passed – a span of time in which it would have been easy to forget the mystery map. However, a donation of the November 1925 edition of The American Magazine featuring a photo of Marian MacDowell provided Lucas with a surprise clue. She noticed that the photo of Marian, cofounder of MacDowell with her husband Edward MacDowell, was similar to a portrait in the book marking the MacDowell residency’s centennial, A Place for the Arts. Though the photographer was unidentified, she guessed it must be the same photographer credited with Marian’s portrait in the donated magazine: Jessie Tarbox Beals.

It was just the sort of clue Lucas needed to widen her search, and she immediately turned to the Jessie Tarbox Beals online archive at Harvard’s Schlesinger Library on the History of Women in America. “As I was looking through her photographic works, not only did I find many photos of MacDowell that I had never seen before, I was shocked to find a photo of the mysterious map,” she says. “What I thought was a drawn map was actually a painted mural.”

The online archive identified the artist as Mary Stonehill, says Lucas, and it appears that she worked on the mural while in residence in a studio space in MacDowell’s Lower House, a structure that has since been razed after years of disrepair and unsafe conditions.

Reinvigorated, Lucas decided to dig into Stonehill’s background. It turns out that there was a muralist named Mary Stonehill (1900-1951). Further sleuthing revealed that in 1924 she married George Stonehill (1888-1944), a well-known muralist, and archive images suggest both had a strong interest in landscape rendering. They were in residence at MacDowell twice, in 1925 and 1927.

As Lucas collected these clues, she continued to wonder about the map mural featured in the black-and-white photograph. Given the specific subject matter of the work, which included the entire MacDowell residency program’s property with studios and its main hall rendered and labeled, she wondered who might own the work or if it even still existed.

A few months later in the spring of 2018, says Lucas, “I was looking for an item in storage in [MacDowell’s] Firth barn … and was curious about a rickety ladder leading to an upper level.” Lucas couldn’t resist and the climb revealed a largely empty attic space, but also “the framed original map painting!” Lucas says. “It appeared to be in very good condition. That was an A + + day!”

The work, framed in heavy wood, is big. It measures approximately 75 in. long and 68 in. high, and it had not been recorded in MacDowell’s database. According to Lucas, someone had backed the Mary McAndrew Stonehill painting with a wood panel, adding to its weight, but perhaps helping to stabilize and better preserve it as well. Lucas speculates the piece was long ago lifted to the barn’s upper level through a hay door for safe keeping until a location large enough to display it could be identified.

As the environment in the barn had proven safe for the more than 90-year-old work — the space remained warm in winters and relatively cool in summers as a result of it being attached to a conditioned studio space — it would remain there over the next three years of discussions about where a painting that size could be displayed at MacDowell. It turned out that the only wall large enough to hold the painting, and in a space with stable temperatures, is a stairwell connecting the ground and second floors off MacDowell’s Bond Hall, a space immediately adjacent to MacDowell’s catwalk gallery.

MacDowell’s maintenance crew of John Sieswerda, Jamie Sargent, and Jeromy Brett, with help from Gardener Dan Thayer, hung the painting in April of 2021. It offers a charming snapshot of a time when a few of MacDowell’s older studios bore different names, just as the artist residency was approaching the end of its second decade. The landscape rendering done in a style similar to American folk art offers an intriguing reminder of both the 114-year-old organization’s modest beginnings as well as its enduring legacy.