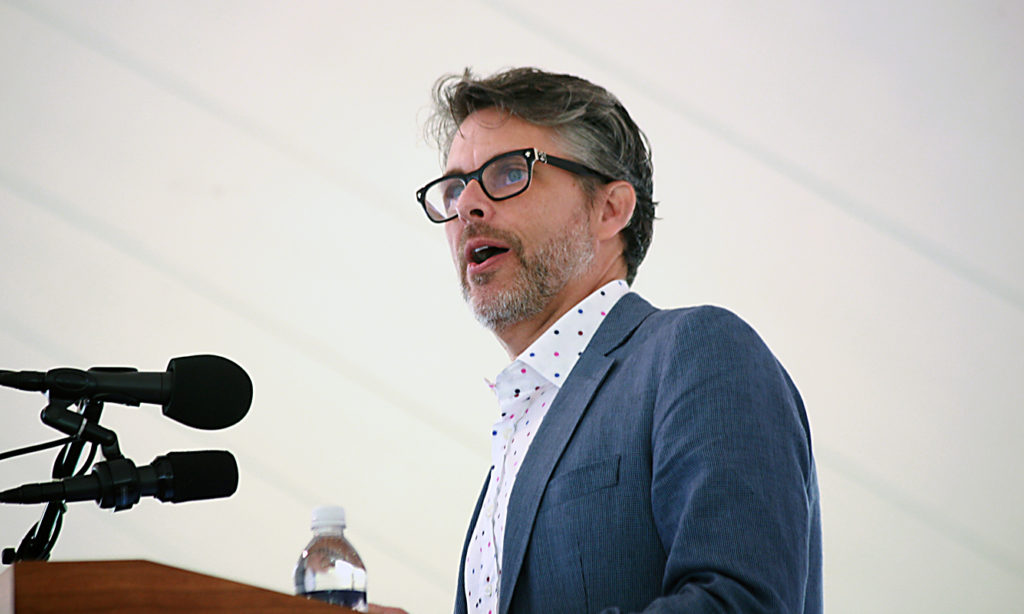 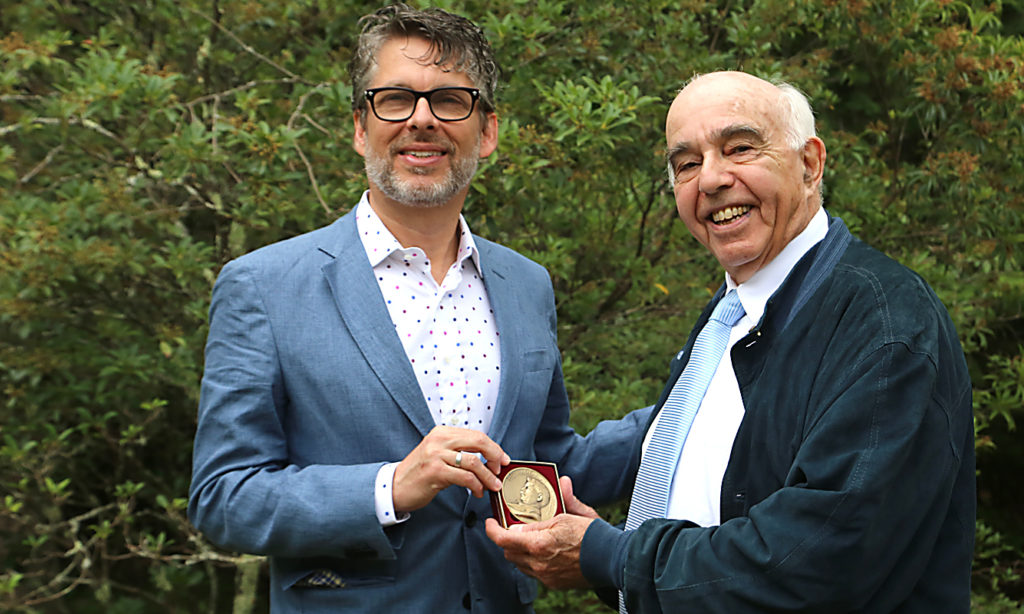 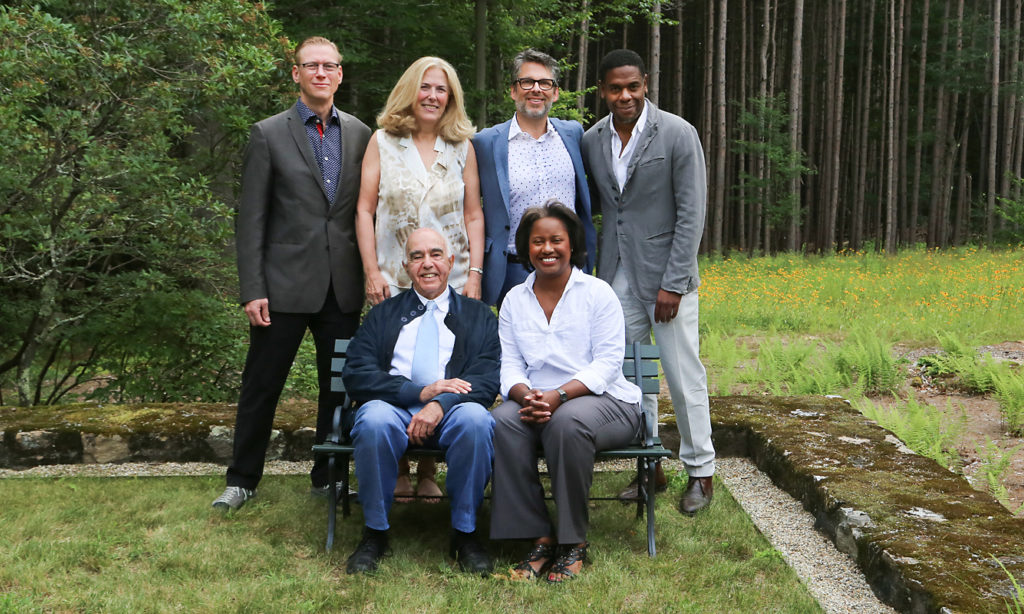 Thank you, thank you all for being here on this extraordinary day, the sun is repeatedly threatening to break through the clouds and it looks like it's happening now.

As I’m sure everyone here must be aware, our Medalist this year, our 2015 Medalist Gunther Schuller, died on June 21st, at the age of 89. Now, it's a nice day, shaping up to be a beautiful day, here in Peterborough. We're all happy to be together, in this beautiful place. The idea of the Medal, the MacDowell Medal, is to celebrate, and that's what we've gathered here to do. We're here to celebrate both the life and the work of Mr. Schuller and the creative spirit that he embodied so durably and so inexhaustibly right up to the end of that life. We're here to celebrate the creative spirit of all the artists in residence today, and of every artist who has put in time here since we first opened for business 108 years ago. (David, I know you remember). I know that, and I'm sure that's how Mr. Schuller would want it. No doubt he would want us to celebrate him, and not to dwell. I don't want to dwell.

But I just can't help it. First of all, the MacDowell Board of Directors, which I have the honor of chairing, lost three of its members in the past year: George Nicholson, Jytte Jensen, and Susan Sollins-Brown. Susan actually served on the Medal selecting panel for our Medalist last year. Two of our board members endured the deaths of their beloved spouses in the past year.

And here we are in New England, a region that from Cotton Mather to Emily Dickinson to Anne Sexton to the Pixies' Black Francis has historically shown itself to be amenable to extended ponderings of mortality, of that death who kindly stops for us, whether or not we stop for him. And here we are at the MacDowell Colony, a place that openly encourages the artist in residence to ponder his or her mortality.

Don’t believe me? In every studio at the MacDowell Colony, as many of you know, and as all of you will see when you tour the studios this afternoon, you will find a number of tombstones. These are small wooden planks, some straight rectangles, some pointed at the top or rounded like actual headstones, on which a resident artist, typically just before departure, signs his or her name and supplies the dates of his or her residency. As each tombstone fills with names it is hung from a nail on the wall or lined up along the fireplace mantle; year after year, decade after decade, the tombstones accumulate. In the oldest studios, they crowd the walls by the dozen.

Sooner or later, when you work in a studio at MacDowell, a day or an hour will come when the work’s not going that great, your attention wanders, your eye strays to the tombstones lined up over your fireplace or nailed up on the wall over your desk, and if your studio is old enough and your eye strays back far enough, back before the mid-1950s or thereabouts, it will occur to you that all of the artists and writers and composers whose names appear on those tombstones are at least highly likely to be dead by now. In some of the oldest studios, the inscriptions on the first few tombstones, especially those that were written in pencil, have faded to illegibility. Many tombstones are almost completely blank.

Now, I know that the tombstones are meant to be the record of a continuous active creative human presence in a studio, going all the way back, in some cases, to before the First World War. But again, I can't help it; I dwell. I'm a dweller. I have always found the tombstones to be a powerful reminder of the oblivion that awaits me and, in all likelihood, the work that I've come to MacDowell to struggle with.

I mean, no wonder Thornton Wilder wrote Our Town here, bringing a graveyard up onto the stage, and filling the world—or reminding us of how the world is filled—with the presence of the dead.

The other day as I was walking with my dog along the road up to the little Maine village where we spend our summers with my family, the Downeast sky was tufted with high white clouds, a smell of salvia and salt in the air, a pickup truck racing by with its window rolled down, trailing a sweet ache of the Allman Brothers’ “Melissa,” it struck me that, at 52, my present age, by even the most optimistic scenario I am well past the midpoint of my life. A hundred and four would be pretty spectacular.

Now, I’m comfortable with the idea of mortality, or at least I always have been. I never felt the need to believe in heaven or an afterlife. It’s been decades since I stopped believing—a belief that was never really more than fitful and self-serving to begin with—in the possibility of reincarnation of the soul. I’m not totally certain where I stand on the whole “soul” question. Though I certainly feel as if I possess one, there’s just something too wishful in that feeling, and so I’m inclined to dismiss it at the same time that it comforts me. I can live with that contradiction, as with the knowledge that my time is finite, and growing shorter by the day. It’s just that lately, for the first time, that shortening has become truly perceptible. I can feel each tiny skyward lurch of the balloon as another bag of sand goes over the side of my basket.

When I was young and callow (as opposed to middle-aged and callow), and I would hear about the death of someone I knew or admired, in particular someone older than me, my thoughts tended to run more or less along the following lines:That is so sad. Well, of course, everyone has to die sometime. Everyone, that is, but me. (Remember feeling that way?)To be accurate this wasn't really something I thought, exactly. More like something I simply assumed, took for granted. Back then I took pretty much everything for granted, but especially, time.

Now, when I consider the death of a friend, a loved one, a colleague, a fellow board member, a beloved teacher and influential artist, like Gunther Schuller, I am much more likely to feel, in addition to grief or regret, Soon enough it will be you. And then—I can't seem to help it—I think something along these lines: And so, what was the point of it all? All the hard work, all the disappointment, all the striving and wishing and heartbreak, all the hours and money and time and hopes invested by the parents of the dead one. Whether you are a mensch or a rogue, lazy or industrious, greedy or giving, the end of your story is the same as everyone else's. And to what end? Why does it matter? And for at least a few minutes after I hear the bad news, a bleak, small voice within me says, very clearly, It doesn't.

We all have our own way of grieving, I guess.

The thing is, the question of what matters, and why, is fundamental to the work we do at the MacDowell Colony. On the Board of The MacDowell Colony, we spend vast amounts of time sitting around long tables or dialing in on a conference line, trying to figure out for ourselves so that we can tell others, why MacDowell matters, why solitude and fellowship and a picnic lunch matter, why a library matters, why a peer selection matters. And most centrally of all, sometimes overtly and underlying every other discussion, why art matters.

To each of these questions that bleak, clear voice replies, it doesn’t. Or perhaps that small voice throws the question back at us, turns it around, and asks, To whom? Art lunches, and libraries don't matter to the universe. They don't matter to neutron stars, nebulae or gas giants. Rocks, trees and zebras don't care if our admissions system is unbiased. When some nut-job takes a knife to a Rembrandt, when the Taliban dynamite a 1500-year old hundred-foot-tall statue of the Buddha, the earth rolls on, to the next ice age or meteor impact. If there's no money available to help defray the expense when a painter, who is also a working mother, has to arrange unpaid leave and child care so that she can come for two all-too-brief but transformative weeks at the MacDowell Colony, and as a result she is obliged to give up on painting, for good, the loss fails to register on history and Time.

The only ones, of course, to whom tasty and nutritiously composed picnic baskets, the caliber of applicants, or the Afro-Cuban musical tradition matters, of course, is us. Poor little humans, caring about stuff. Caring about art, and tradition, and the creative lives of working mothers, and about each other.

That, I end up saying to the gray despairing voice inside me, is the point of it all. You're right: nothing matters—except to us. As far as we know, we are the only objects, the only beings, in the entire universe, to whom the universe matters. That's our nature; our role, in turn, is to matter to other people, and our task, our greatest work, is to matter to them in a way that brings them comfort, safety, peace, knowledge or joy. Art can do and has done all of those things, at one time or another, sometimes all at once. Gunther Schuller with his gifts as a composer, musician and teacher could do, and did, all of those things. So has the MacDowell Colony and, on a good day, so has its hard-working and faithful Board of Directors, and the loved ones who support them. The work that we do matters and because it matters, we matter. Because those we have lost matter so much to us, we mourn that loss. The extent of the grief we feel is a measure of how much they and their lives and their work mattered. Let the loss serve to renew and to remind us of how much we all matter to each other, and how much it matters that we carry on, in spite of the indifference of galaxies and zebras, with our work.