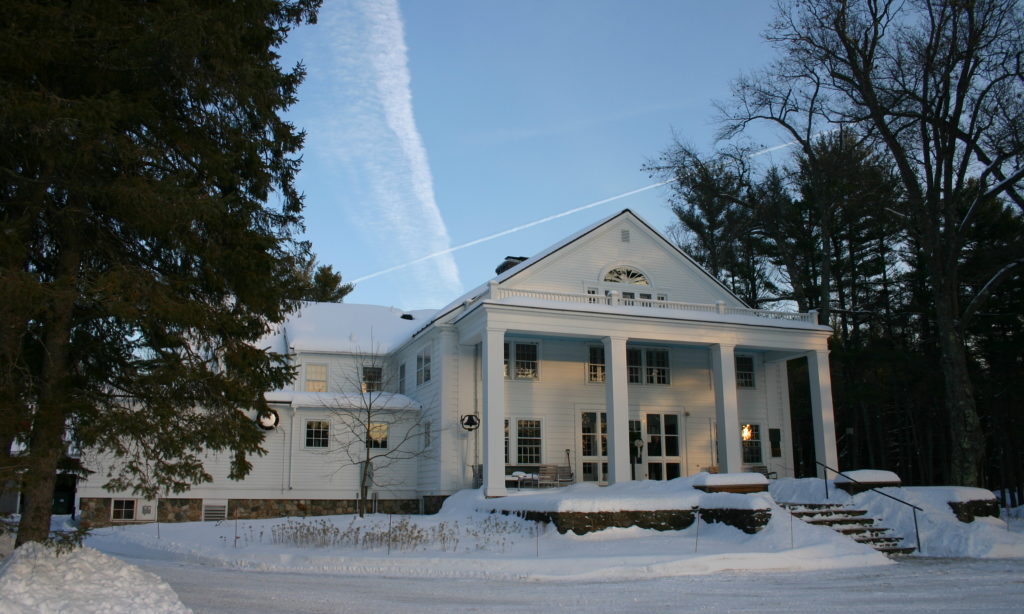 FOR IMMEDIATE RELEASE — PETERBOROUGH, NH — MARCH 14, 2008 – Today the New Hampshire Supreme Court unanimously affirmed a Superior Court ruling and issued an unequivocal opinion declaring that The MacDowell Colony, by promoting the arts, is a charitable institution. The Supreme Court decision comes more than two years after the Peterborough Selectmen rejected the Colony’s status as a charity entitled to property tax exemption. In its decision, the Court said: “The trial court [concluded] that by ‘supporting the artistic process,’ MacDowell benefits ‘at the very least, artists across the world, and, in a broader sense, the general public.’ The [trial] court further concluded that MacDowell’s artist-in-residence ‘program primarily benefits society as a whole.’ We agree.”

The decision stated that “the relevant inquiry is not whether the public…benefits from the organization’s property, but whether the public…benefits from the organization’s performance of its stated purpose. While MacDowell does provide services to the Colony Fellows, its charitable purpose is, as the trial court determined, ‘promotion of the arts.’ The provision of that service benefits a far greater segment of society than the artists who actually use MacDowell’s property.”

Justices Linda Dalianis and James Duggan offered additional affirmation in a concurring opinion. “Receiving a Fellowship to MacDowell is like receiving a prize or an award for excellence in art, the benefits of which ‘are of a two-fold nature.’ Obviously the individual Fellows benefit, but the general public necessarily receive the benefits of the art produced not only by the artists who become Fellows, but the other artists who compete to become them.” Likening it to the discovery of a medical cure, the two Justices said, “…even though the ‘reward’ goes to only one person, the fact that a particular individual someday may qualify to receive the reward is but the instrumentality through which the benefits that will be bestowed upon the public are brought about.”

The case against MacDowell began in 2005, amid the annual application process every charitable organization makes to its town government for property tax exemption. At that time, Peterborough’s Selectmen denied MacDowell’s charitable status, overlooking longstanding precedent set by previous Select boards, and issued a tax bill.

Prior to taking this action and bringing the case to court, the Selectmen had proposed that MacDowell make a “payment in lieu of taxes” (PILOT). MacDowell’s board of directors unanimously rejected this proposal, adhering instead to state law and the principle that the Colony — through its 100-year mission of promoting art and awarding Fellowships— is, and has always been, a charity devoted to the public good. To date, MacDowell has awarded residencies to more than 6,000 artists, including Aaron Copland, Benny Andrews, Leonard Bernstein, Alice Walker, Willa Cather, and more recently Meredith Monk, Jonathan Franzen, Alice Sebold, Wendy Wasserstein, and Michael Chabon. The works that have directly benefited from a MacDowell Fellowship include, among many others, Our Town by Thornton Wilder, Mass by Leonard Bernstein, Death Comes for the Archbishop by Willa Cather, and The Lovely Bones by Alice Sebold.

Oral arguments on the case were heard in Superior Court in December, 2006, resulting in Judge Gillian Abramson’s strong ruling in favor of the Colony. She wrote: “Charitable institutions, such as MacDowell, that are aimed towards enabling artists to significantly contribute to the well-being of our society should be supported, not discouraged. By fostering the creation of the arts, MacDowell serves a charitable purpose for the benefit of the general public through its artist-in-residence program.”

After the trial court’s verdict, the Peterborough Selectmen chose to appeal the case to the New Hampshire Supreme Court.

Today’s 13-page decision by the New Hampshire Supreme Court reinforces Judge Abramson’s ruling, saying, “MacDowell’s charitable purpose is not to actually create art but to promote it; that is, in the words of its charter, ‘to encourage study, research, and production of all branches of art; to develop a sympathetic understanding of their correlation and appreciation of their value; and to broaden their influence.’ It is MacDowell, not the individual artists, that performs that stated purpose.”

While defending MacDowell’s charitable status required significant time and resources, the Colony’s board of directors felt the issue was sufficiently important to pursue at the highest level. MacDowell hoped the case would set a precedent, one that would safeguard other charitable organizations from increasing pressure by municipalities to pay taxes they do not owe.

Says MacDowell’s Executive Director Cheryl Young: “Charitable organizations exist to serve real needs in our communities, sustaining a healthy society and enhancing the quality of life for all. The law encouraging charitable uses of property is essential to that end.”

On January 16, 2008, oral arguments for the appeal were made to the New Hampshire Supreme Court. By affirming the Superior Court’s ruling, and thus the Colony’s right to property tax exemption, today’s Supreme Court decision also refuted each of the town’ arguments. “The town argues that certain programs facilitated by MacDowell but provided by its artists in residence…do not qualify MacDowell for public charitable status. We need not address this argument, as MacDowell relies solely upon its artist-in-residence program as satisfying its public service requirement, and we have found that program sufficient.”

MacDowell’s attorney William L. Chapman observed: “The reasoning behind this decision supports a policy of valuing the arts because the arts serve the public good. This logic is relevant at the local, state, and national levels.”

After the decision, the Colony issued this statement: “Today’s Supreme Court decision affirming MacDowell’s longstanding property tax exemption is welcome news to all citizens who value the work done by charitable organizations in New Hampshire. In response to the challenge brought forth by the Peterborough Selectmen, the Court reviewed the principles set forth by our state constitution and issued a forceful opinion in support of the arts. The Court’s ruling reminds us that municipalities and non-profits are on the same side, working to strengthen our communities and enhance the quality of life for all citizens.”

The Colony added: “We are deeply grateful to the citizens of Peterborough for their steadfast support for more than 100 years, and we are proud to be an integral part of our town’s past, present, and future. That the importance of the arts in the Granite State has not faded with the passage of so many generations serves as an inspiration to us all.”