MacDowell Turns On the Power of the Sun 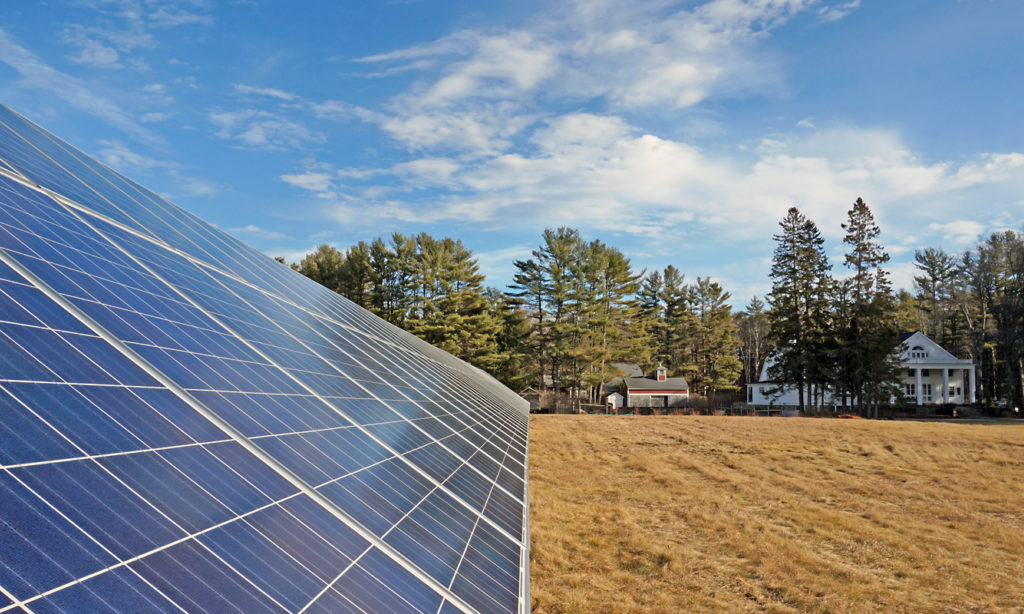 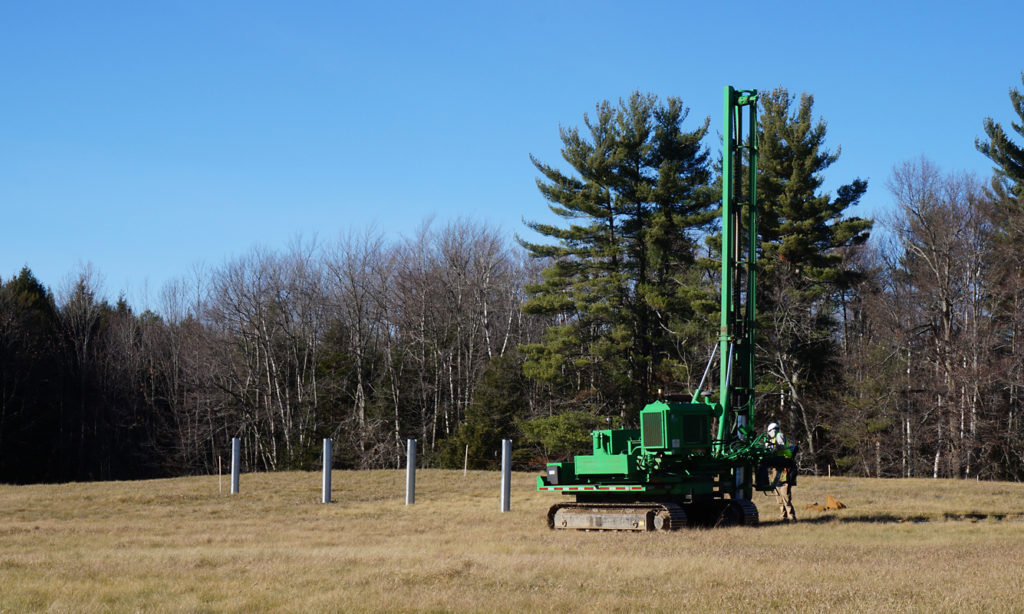 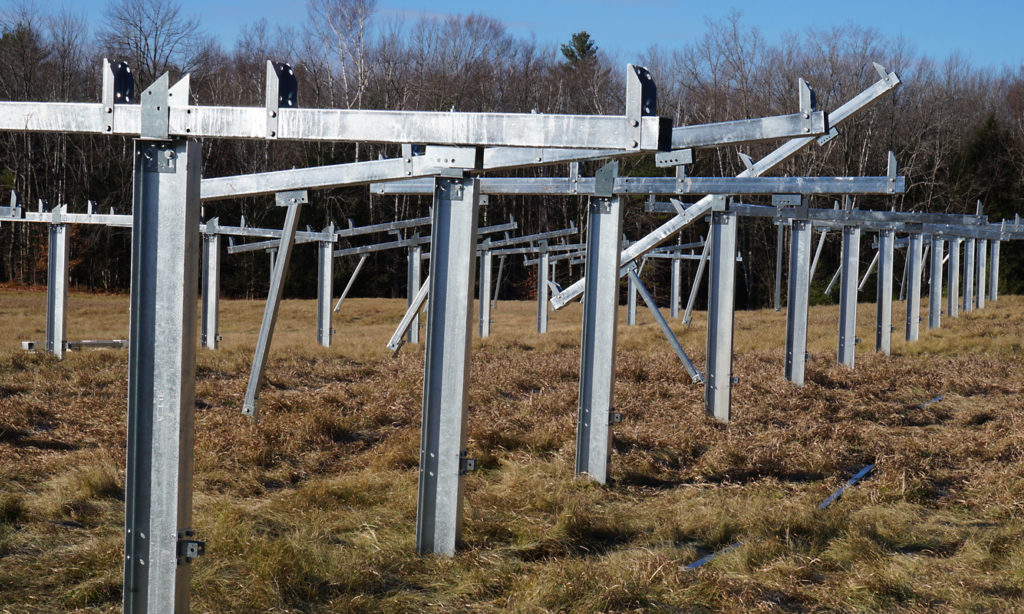 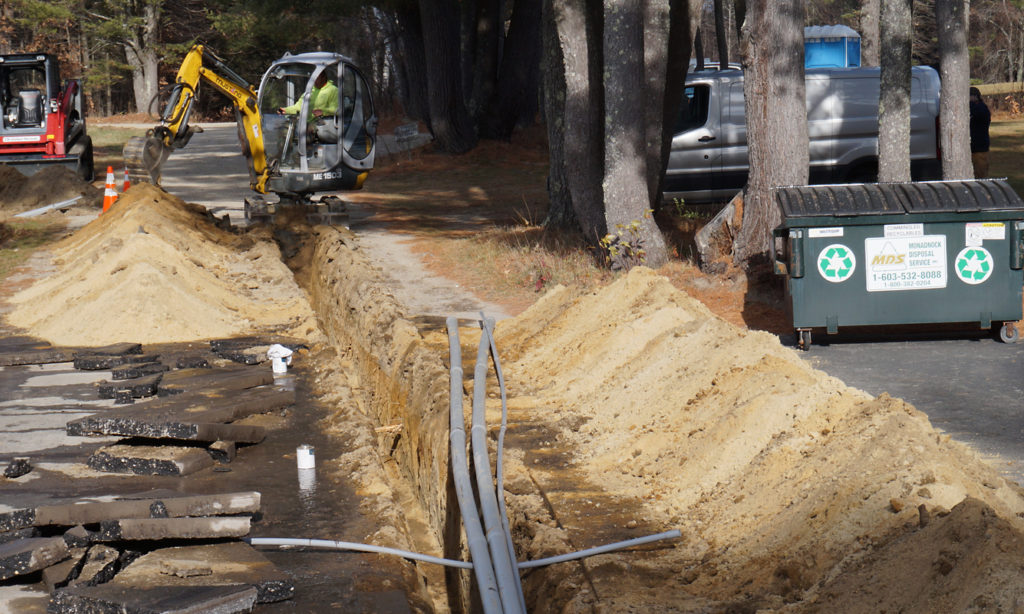 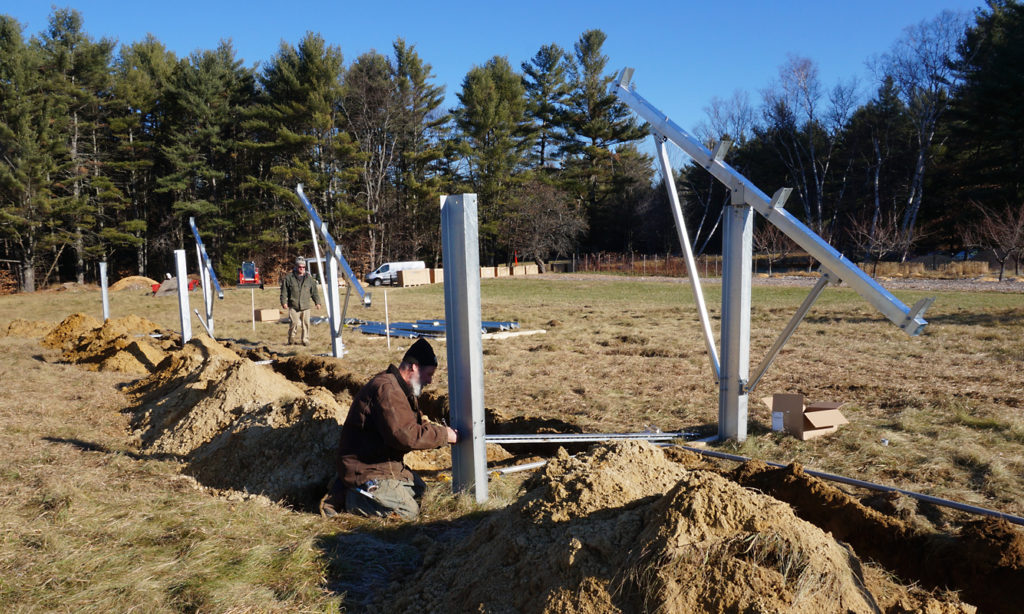 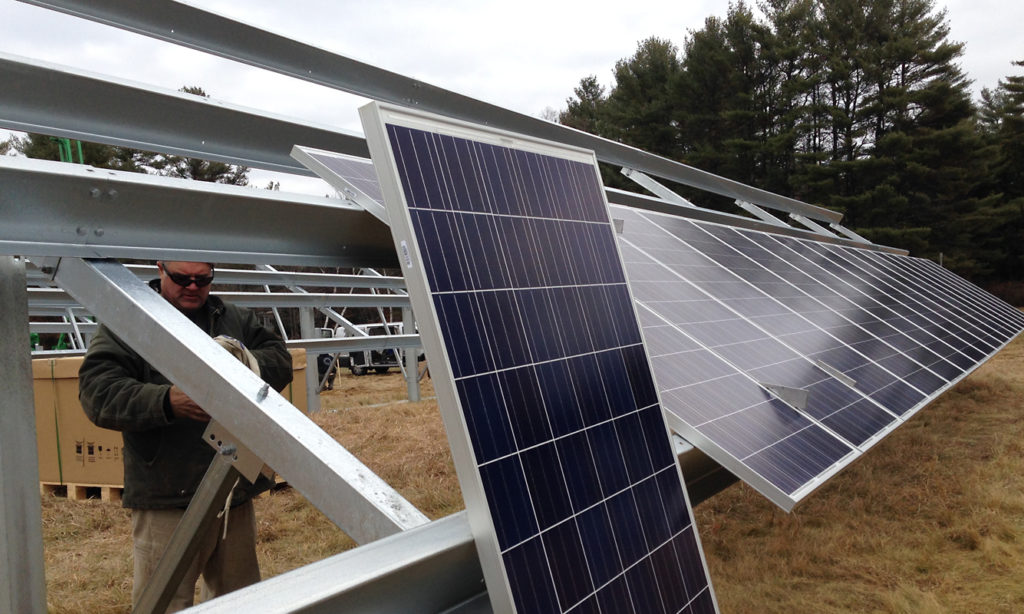 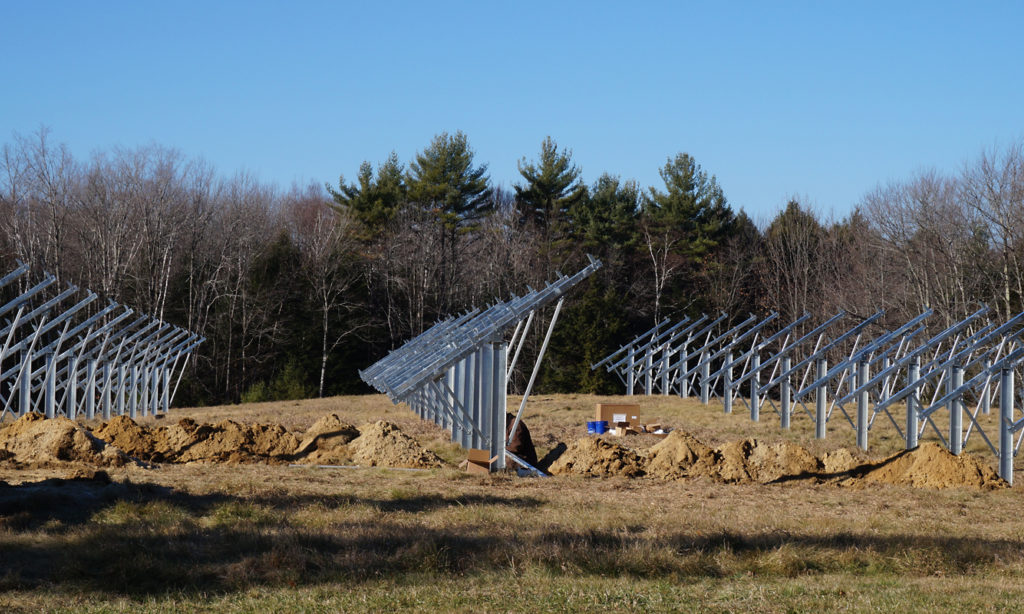 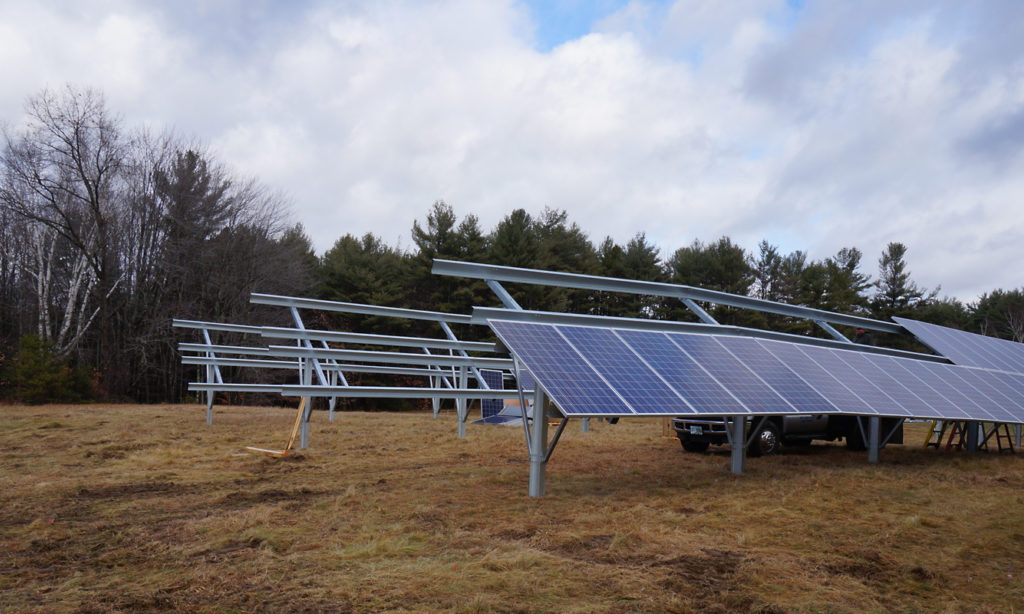 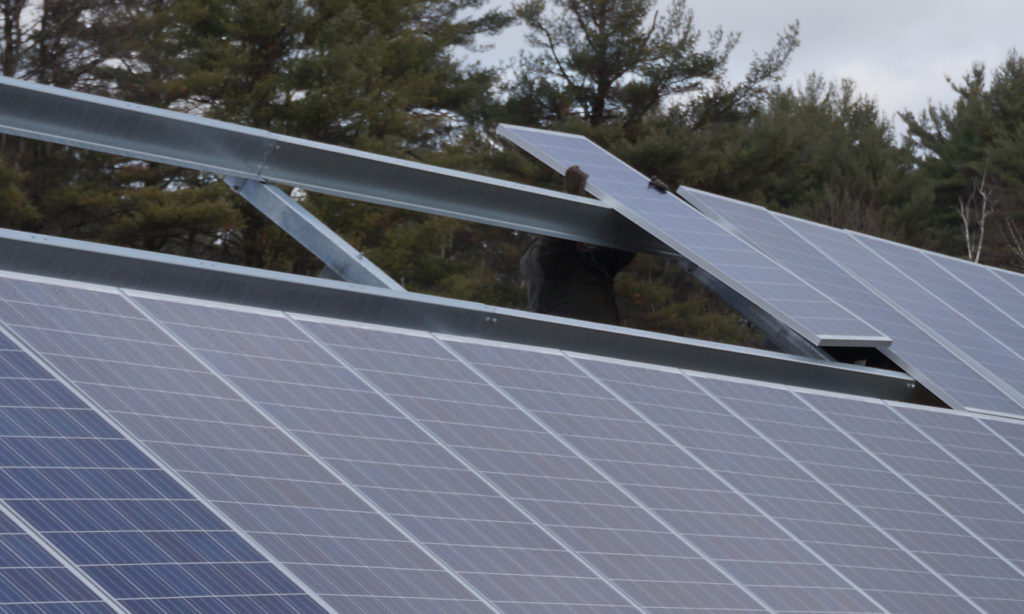 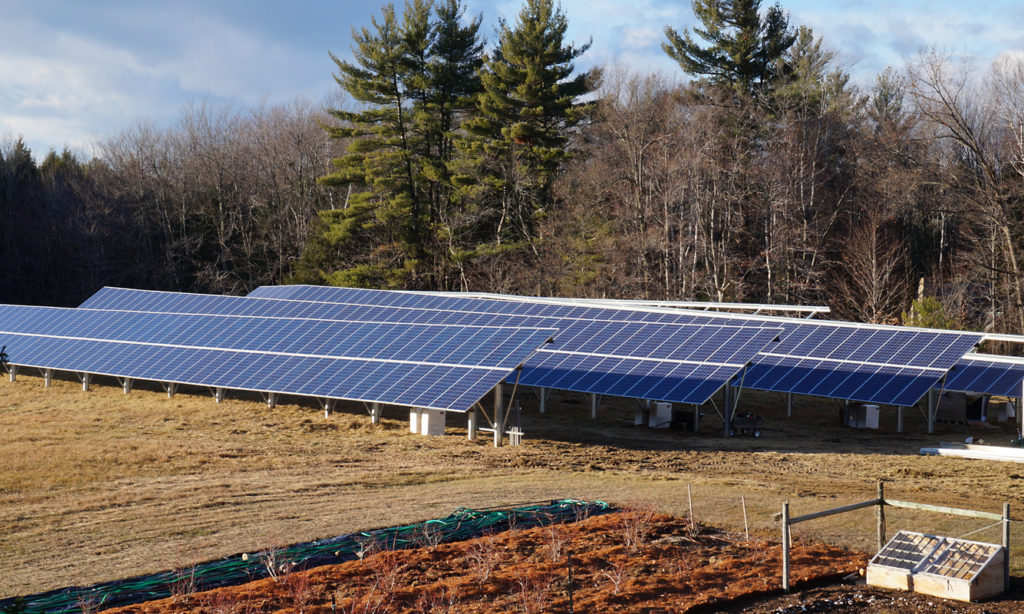 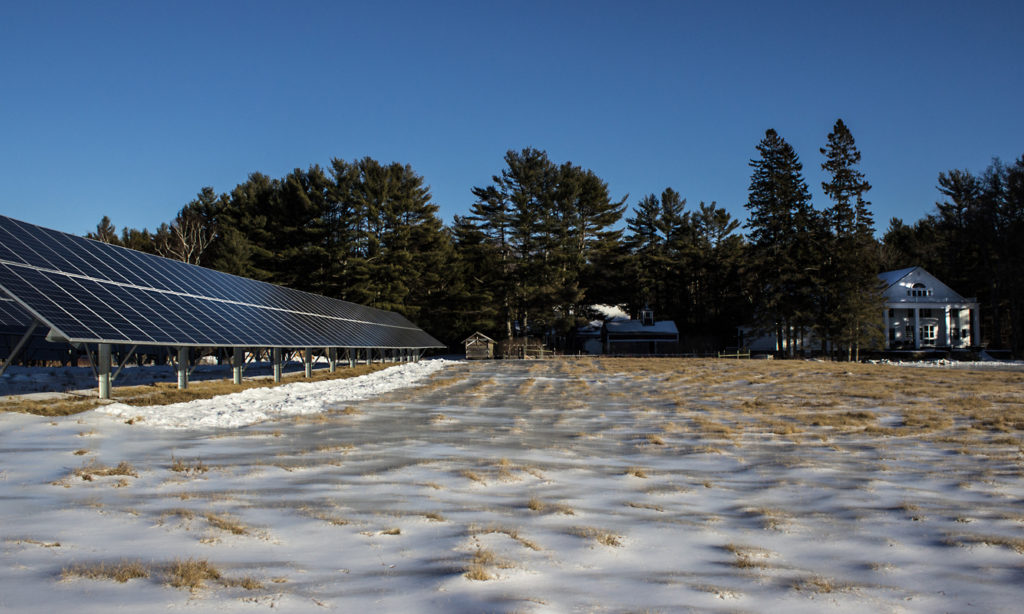 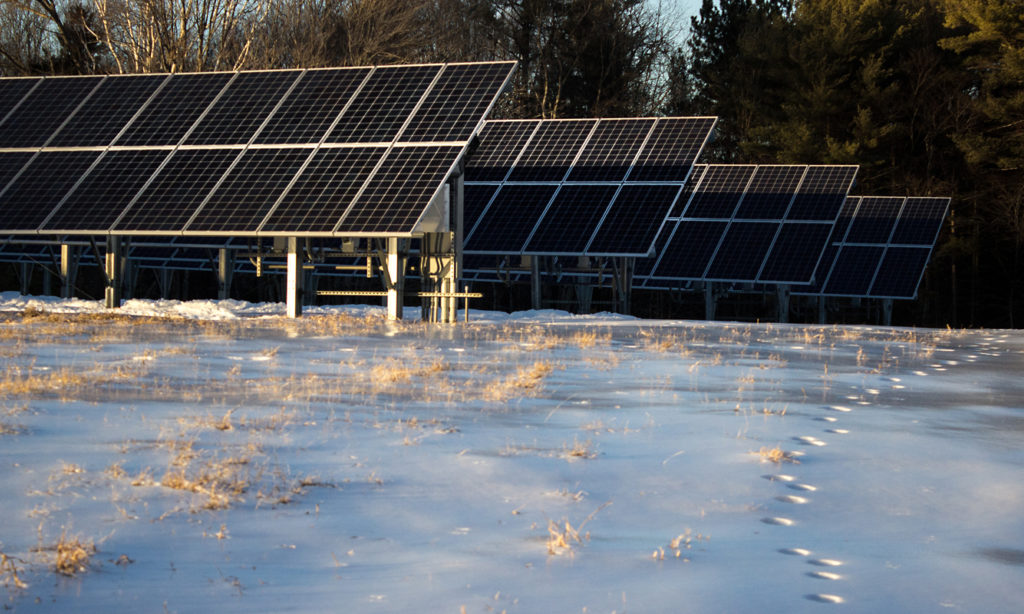 FOR IMMEDIATE RELEASE -- Jan. 28, 2016 -- A new half-acre array of solar panels at The MacDowell Colony has begun offsetting 74 percent of the 450-acre property’s electrical needs each year. The project signals a major move forward for the nation’s first artist residency program as it continues efforts to improve efficiency in its buildings and reduce fossil fuel consumption.

The photovoltaic panels, which started producing electricity for MacDowell on January 26, will supply about 186,000 kWh each year – more than enough for Colony Hall, the Colony’s largest structural consumer of power, which houses administrative offices, the kitchen, dining room, laundry, and gathering space for artists. The installation will prevent about 182,300 pounds of carbon dioxide from being released into the atmosphere each year.

“This system is part of a long-term strategy MacDowell has been pursuing since 1992 to renovate studios and common buildings to reduce both energy loss and our dependence on fossil fuels,” says MacDowell Resident Director David Macy. “We started talking solar panels on Colony Hall during renovation planning in 2007 at the same time that we switched from fuel oil to wood pellets for that building’s heat and hot water.”

Since then, Macy and members of the MacDowell Board’s Plant Planning Committee have tracked solar power’s cost-to-benefit ratio and recognized last year that the timing was right. As a charitable nonprofit, the Colony can’t access federal incentives to help defray overall costs of such a project, so Board Member Bob Larsen of Concord stepped in and introduced the Colony to ReVision Energy of Exeter, NH, a solar energy company that offers turnkey installations. ReVision works in tandem with IGS Solar, a commercial and residential solar provider that invests in renewable energy projects for nonprofits. IGS Solar financed, owns, and operates the solar project on MacDowell’s property, and the Colony has entered into a 20-year power purchase agreement with the company.

Because MacDowell’s project started development just as the Town of Peterborough was completing its 1-megawatt solar array, Macy said Town Administrator Rodney Bartlett provided valuable advice about the ins and outs of such an arrangement.

Coincidentally, construction and installation of 468 3.5-foot by 5.5-foot photovoltaic panels was completed shortly after the signing of the historic Paris climate agreement. Macy notes that the Colony is only getting started: “Eastman Studio, our most recent renovation effort is an indication of where we’d like to take all of the buildings on the property,” he says. During that project, what had been a drafty studio was transformed into an efficient structure by doubling the thickness of its walls and roof for insulation and adding energy efficient windows. The electric heat pump that warms the studio in winter will eventually be drawing electricity produced without fossil fuels.

“From our energy-conserving steps during construction of our new library to on-going studio renovations, we’ve committed to reducing the Colony’s impact on the environment while ensuring its mission to provide ideal working conditions for artists,” says Executive Director Cheryl A. Young. “As a leading contemporary arts center, we want our physical plant to be as cutting-edge as the artists who come to work here. The MacDowells would be proud – they liked modernity of the practical kind.”

The direct current now being created by the solar panels is fed through inverters to convert it to alternating current so it can be used by MacDowell. Any electricity that is left over on sunny days is exported to the power grid and is net metered by the utility company, meaning MacDowell receives credits on its electric bill for all excess generation that is fed into the grid. IGS Solar, based in Ohio, takes advantage of the federal and state incentives, which typically last six years. And because solar power costs are contracted to increase at a slower rate than public utilities’ historic rates, MacDowell will see more and more savings as time goes on.

“After six years, MacDowell will have the opportunity to purchase the system outright,” says Macy, explaining the Colony has a goal to raise the funds for that purchase by 2022.

And what do the artists think of the new solar array and all that it means for the Colony?

“Most of the artists have asked about it,” says Macy, “and all of them have embraced the move and have expressed their excitement at being here while the installation has happened.”