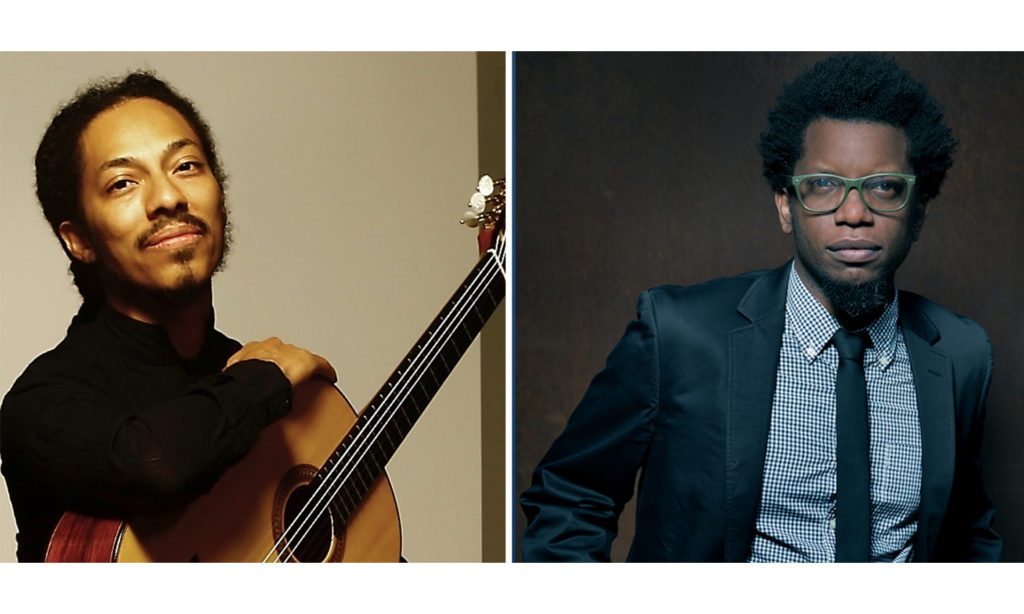 Composers (from left) João Luiz and Aruán Ortiz will appear at MacDowell NYC on March 12 at 7 p.m.

An evening of performances and discussion with a multilayered look into the musical influences and connections of Cuban and Brazilian music at MacDowell NYC.

On March 12, 2020, The MacDowell Colony presents “Composers Aruán Ortiz and João Luiz – From Contemporary Chamber Music to Avant-Garde Jazz.” The evening will include discussion and acoustic performances ranging from contemporary chamber music to avant-garde jazz co-curated by MacDowell board member and Fellow Tania León and board member and WQXR personality Terrance McKnight. The evening’s performers, in addition to João Luiz of Brasil Guitar Duo and Aruán Ortiz, will include Brad Jones (bass), Liz Rosa (vocals), and Mauricio Herrera (percussion).

This public engagement, the third in MacDowell’s year-long salon series "Spark & Illumination," promises a multilayered look into the Latin American and American musical influences and connections of Cuban pianist and composer Aruán Ortiz and guitar compositions of João Luiz. It also aims to strengthen relationships among composers and offers insight into how their cultural language and expression is a direct result of musical influences.

MacDowell provides essential support for emerging and established artists by bringing together diverse, multidisciplinary talent to exchange ideas and pursue creative work, and MacDowell awards residencies to composers from all over the world. “MacDowell Presents: Composers Aruán Ortiz and João Luiz – From Contemporary Chamber Music to Avant-Garde Jazz” is an opportunity to experience artists perform and discuss their music and influences just as they would during a MacDowell residency.

Doors will open at 6p.m. Performances will begin at 7p.m. Light refreshments will be served.

Tickets are $20 and may be purchased at this link.

The next event in the 2020 MacDowell NYC Salon Series takes place on May 11 when MacDowell presents The Seat of Our Pants: inspired by Thornton Wilder’s play The Skin of Our Teeth. Composer, librettist, lyricist, and MacDowell Fellow Ethan Lipton created his new adaptation of The Skin of Our Teeth at The MacDowell Colony for the Public Theater. In The Seat of Our Pants, Lipton re-imagines the most iconic of American plays – originally penned by MacDowell Fellow Thornton Wilder – in musical form. How does a play from the classic canon “sing?” Be among the first to hear the songs and join a conversation with Lipton and director Leigh Silverman. A TBA special guest star artist will read from Wilder’s original play.

Tania León is a member of the Board of Directors of The MacDowell Colony and is highly regarded as a composer and conductor, and recognized for her accomplishments as an educator and advisor to arts organizations. Her first opera, Scourge of Hyacinths, based on a play by Wole Soyinka with staging and design by Robert Wilson, received more than 20 performances in France, Switzerland, Austria, and Mexico. A longtime resident of New York, she has played important roles at its institutions, such as the Dance Theater of Harlem, Brooklyn Philharmonic, American Composers Orchestra, and the New York Philharmonic, where she served as new music advisor. León is the founder and artistic director of Composers Now, a nonprofit in New York City that celebrates the diversity of composers in the city and honors their contributions to the cultural fabric of society. A professor at Brooklyn College since 1985 and the Graduate Center of CUNY, she was named distinguished professor of the City University of New York in 2006. León has received Grammy nominations for Best Contemporary Classical Composition. She has appeared as guest conductor throughout the U.S. and on all continents of the world. Her honors include induction into the American Academy of Arts and Letters (where she currently serves as vice president) and the American Academy of Arts and Sciences; recognition from the Fromm, Koussevitzky, and Guggenheim foundations; the ASCAP Victor Herbert Award; a Pulitzer Prize nomination, and a 2018 United States Artists Fellowship.

Terrance McKnight has one of the more familiar voices in New York as an evening host at classical radio station WQXR. He moved to New York in 2008 to work for WNYC and a year later joined the lineup at its sister public-radio station WQXR. Some of McKnight’s most notable work is a series of hour-long audio documentaries for which he was writer, producer, and host. They include profiles of Dr. Martin Luther King, Jr. and the place music held in his life; Florence Price, the first African-American woman composer to have a piece played by a major symphony orchestra; poet Langston Hughes and his collaborations with composers and musicians; and Leonard Bernstein as viewed through his commitment to racial justice in classical music. McKnight has been programming music and other audio for the Museum of Modern Art as part of exhibitions of artwork by Jacob Lawrence, Francis Picabia, Robert Rauschenberg, and Charles White.

Named “one of the most creative and original composers in the world” (Lynn René Bailey, The Art Music Lounge), pianist, violist, and composer Aruán Ortiz – born in Santiago de Cuba, and resident of Brooklyn, NY – has been an active figure in the progressive jazz and avant-garde scene in the U.S. for more than 15 years. He has written music for jazz ensembles, orchestras, dance companies, chamber groups, and feature films, incorporating influences from contemporary classical music, Cuban Haitian rhythms, and avant-garde improvisation. His recent albums have received five stars from prestigious jazz magazines around the world. Hidden Voices (Intakt 2016) was lauded as “a solid and unique new sound in today’s jazz world,” by Matthew Fiander in PopMatters, and his solo piano effort Cub(an)ism (2017) was called "a genius exercise in the exploration of depth and perception that reveals a bright new wrinkle in the relationship between music and mathematics, reimagining Afro-Haitian Gaga rhythms, Afro-Cuban rumba and Yambú into heavily improvised meditations on modernism that recall John Cage and Paul Bley,” (Ron Hart, The Observer). Aruán has played, toured, or recorded with jazz luminaries such as Wadada Leo Smith, Don Byron, Greg Osby, Wallace Roney, Nicole Mitchell, William Parker, Adam Rudolph, Andrew Cyrille, Henry Grimes, Oliver Lake, Rufus Reid, Terri Lyne Carrington, and collaborated with choreographer José Mateo; filmmaker Ben Chace; poet Abiodun Oyewole from The Last Poets; photographer and visual artists Holger Thoss and Paul Lorenz, and German writers Angelika Hentschel and Anna Breitenbach.

Two time Latin Grammy nominee guitarist, educator, and composer João Luiz, began to play the popular music of his native Brazil professionally during his childhood and was later trained in classical guitar by his mentor Henrique Pinto. Winner of the 2006 Concert Artists Guild Competition as a member of the critically acclaimed Brasil Guitar Duo, Luiz has performed extensively in the United States, Asia, Europe, and Latin America. As a performer and composer Luiz is equally at home with classical, Brazilian, and world music; his solo guitar, guitar ensemble, and chamber music repertoire covers all the main works in the guitar literature from Dowland to Berio and Brazilian rhythms from Choro to Baião. His versatility led to his being chosen to collaborate with Yo-Yo Ma and Carlos Prieto on a project to celebrate the 75th anniversary of the Cuban composer Leo Brouwer in a landmark concert in Cuba in 2014. Luiz has recorded more than 13 CDs playing solo, duo, trio, and in quartet, most of which have featured his arrangements of classical or Brazilian works. Luiz holds a master’s degree from Mannes College as a student of Michael Newman, and as the recipient of the Augustine Foundation scholarship he earned his doctoral degree from Manhattan School of Music. Luiz is the director of chamber music at CUNY Hunter College and also teaches guitar at Stony Brook University.