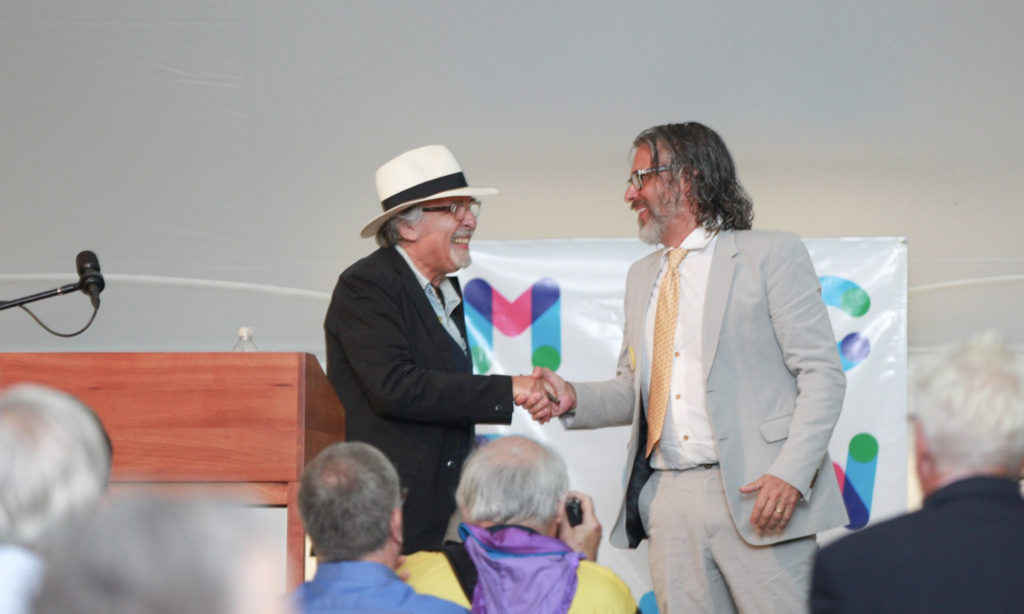 Transcript: Chairman of the Board welcomes the Medal Day 2018 crowd to celebration of Art Spiegelman as 59th Medalist

I’m the Chairman of the Board of the MacDowell Colony. I’m also a Fellow, I’m very proud to say, just like it says on the button. It seems to me that every year, this is my eighth Medal Day, I believe and it seems that every year I say something like Welcome on this spectacular day, welcome on this magnificent summer day, but I don’t feel Iike I can say those things so I’ll say welcome on this wistful, somewhat melancholy yet temperate summer day, and we’re very grateful that the rain has held off as long as it has. I hope it continues to do so.

I want to begin by acknowledging that we have gathered here today on the traditional lands of the Abenaki People, who lived in this area for at least 13,000 years before the arrival of European immigrants and all their anchor babies.
(laughter)

You’ve probably read or heard about the geological mischief that one of the Hawaiian Islands has lately been making for the people who live on it: spitting fire, bleeding lava, detonations and miasmas and burning projectiles. It’s awful to witness, even from a distance, and there has been heartbreak and loss. But all that mayhem, if you think about it, is only Hawaii doing what it does: making more Hawaii. The fiftieth state is the youngest place on Earth, the newest, geologically, of all human habitations. Where today off the coast of the Big Island there are only a few jagged humps of hissing black stone giving off toxic vapor, a hundred or five hundred or a thousand years hence there may be an expanse of fresh green vegetation, lagoons, birds singing in the flower vines. There may be a golf course, a golden beach, a massage yurt.
(laughter)

There may be the shining capital city of the great Hawaiian Empire, or that city’s slums. There may be, a thousand years hence, no human presence at all, just an unmapped island, born in struggle and fire, a wide and fertile place, so new it doesn’t even have a name.

Today, we are here to celebrate a territory like that (you wondered where I was going, didn’t you?):
(laughter)

Dark, fresh, fertile ground, mad with life and its conceptions, brand-new and nameless and not to be found still on many maps. We are here to award the first MacDowell Medal ever given to an artist working in the discipline of ...
(pause and laughter)

See what I mean? Do we call it Comics? Comic Art? Graphic Storytelling? Cartooning? Cartoon Art? Or is Cartoon Art the guy we’re giving the medal to?
(laughter and applause)

That’s it, no more Dad Jokes in the entire speech.

The questionable discipline with the disputed name, of which Art Spiegelman is unquestionably and indisputably the most important living practitioner was, until he came along, unrecognized, by most Americans and nearly all critics, as anything even remotely close to, or worthy of being seen as, art. The people who practiced it were at worst, in the general view, pop hacks and pap purveyors. Sometimes they were that at best, and not just in the eyes of critics and snobs but in their own eyes, too. I remember a story told to me by the great Marvel pencil-man Dick Ayers, when I was researching The Amazing Adventures of Kavalier & Clay, how he was buying a razor or something in a drugstore, in the mid-fifties, and overheard a mother angrily warning her son away from all that trash on the comic book rack. “Hey, lady,” Ayers told her, “That’s how I make my living.” “Well, then,” the woman snapped at him, “You ought to be ashamed of yourself!” And I was, Ayers confessed to me, with a rueful laugh.
(laughter)

For most of the brief history of the blues’ only rival for the title of Greatest American Art Form, even its most hallowed practitioners – Charles M. Schulz, Walt Kelly, Will Eisner, Alex Raymond – would not have dared to imagine themselves eligible to apply for MacDowell Fellowships, and if they’d had that kind of chutzpah, or rated their artistry so highly, I’m far from the certain that a cabin would have been found for them in these woods. And not only because of the stigma attached, for so long – right up through the present moment – to art that appeals to a mass audience, that moves units, that traffics openly in pleasure, that makes its practitioner a little dough, though MacDowell has for most of its history been no less prey to that type of bias than any other institution whose concept of art, like yours and mine and everybody’s, is still so deeply rooted in capital-R Romantic conflations of genius with suffering and craft with a lack of inspiration.

For a century – the modernist century – that laid so much emphasis on the new and the now, the twentieth’s artists seem to have spent an awful lot of time palling around with old-fashioned forms like the opera, the novel, the painting, the lyric poem, the house. Sure, some of them made films, took photographs, wrote popular songs. But the fact that, sometime around the turn of the twentieth century, a few oddballs working for the big New York newspaper syndicates accidentally invented an entirely new kind of visual language, arguably the most effective and powerful narrative tool ever devised, by fusing word balloon with caption and drawing, each commenting on, illustrating, and ironizing the others and at the same time forming an indissoluble whole with them – the panel – this spectacular innovation appears almost entirely to have escaped that century’s so-called geniuses.

They missed the boat, and MacDowell missed it right along with them. On behalf of The MacDowell Colony, I would like to extend our apologies for that oversight.
(applause)

Comics, we’re sorry. We’re trying to make amends. Over the past couple of decades, MacDowell has awarded Fellowships to a still small, but ever-increasing number of graphic novelists, cartoon artists, or whatever the hell they call themselves, among them James Sturm, Cecil Castelluci, Danica Novgorodoff. We have three Fellows in residence right now who are working on graphic novels. And here we are, today, bestowing a medal that has before now adorned the mantelpieces of Aaron Copland, Robert Frost and Toni Morrison, on Art Spiegelman; so let the word go forth, to cartoonists around the world: there is a place for you, and your art, at the MacDowell Colony.
(applause)

Art Spiegelman, perfectly, is an immigrant, born in Sweden during the course of his parents’ postwar journey from Auschwitz to Rego Park, NY. The immigrant child of immigrants and of a wandering people, trailing grief and disaster. I say “perfectly” because for so much of our history we have despised immigrants (whether voluntary or involuntary) in very much the same way – and for some of the same reasons – that comics have been despised. Comics, like immigrants, have been accused of fostering crime, low morals and indecent behavior; they have been piled onto the bonfires of mobs calling for their destruction. They have been looked down upon, ignored, denied their due seat at the common table. And yet, like our immigrants, comics have been a secret source of strength in our culture, of innovation and discovery and, above all, of the transmission of narrative. Art Spiegelman’s story is an American story – meaning it starts somewhere else, far away – and of all the things that make Spiegelman a capital-G Genius maybe the most crucial is his having realized, with Maus, that comics, despised, denied and ignored, afforded him the most powerful way of telling that immigrant story.

Immigrant minorities – voluntary or involuntary – tend to keep track of their notable firsts, like Louis Brandeis and John F. Kennedy. Among the upstart, johnny-come-lately tribe of comics artists, Spiegelman plays the Jackie Robinson role: Maus opened all the doors that had hitherto been closed to them: the big prizes, the trade publishers, the critical esteem. The eight-week residencies, with your lunch in a picnic basket and your work assiduously and even compulsively fostered.

As gratifying as I am sure all that recognition must have been to Art Spiegelman, I imagine that at times there must also have been a certain bemusement in it, too. It might even have been, for Spiegelman, Robinson, Brandeis, for Sally Ride, a touch infuriating. We read Maus and were awed by its darkness, rawness, pathos, volcanic humor, and said, as a culture, “Not only are you awesome, Art Spiegelman, but damned if comics can’t be awesome, too!” When this happened Spiegelman, like Ride, Brandeis or Robinson, must sometimes have thought with mingled pride and sorrow of his despised heritage, of all those before him who had toiled invisibly for so long without recognition of their glory, and thought ‘Yeah. We’ve been here all along.’

The history of comic art in this country echoes the history of its immigrants thus: It unfolded in the shadows, in the cracks and corners, away from the bright centers of power, prestige, and fame. Today, as this august institution, which did not admit its first cartoonist until sometime in the late 1990s I believe, acknowledges the greatness of cartoonist Art Spiegelman, I think it’s our obligation to consider, as well, all the artists and art that MacDowell has failed to see, failed to foster and acknowledge, before today: Not just the George Herrimans or Robert Crumbs, not just the medium of comics itself. All the black artists before Pauli Murray and James Baldwin in the late 1950s, say, or all the potential black Medalists before 2010, when Sonny Rollins stood on this podium. All the artists working outside the academies and publishing houses and galleries, in prisons, on the fringes, who will never know the peace of a private studio or the joy of the kind of intense artistic community that MacDowell affords. Everyone we have missed, and keep on missing, even though sometimes they’re right in front of us. Even when they’ve been here all along.

At this moment, in this country and around the world, we are seeing and hearing immigrants and their stories but, as ever, we’re overlooking, neglecting and ignoring far more than we see and hear. We’re missing so much, and so many. We stand in the bright center of our privilege and unless some tale of darkness and brutality overwhelms us the way Maus overwhelmed us, we keep our eyes resolutely away from the shadows. It was just this bleak certainty of willful blindness that art was invented to circumvent and undermine. Art gives or imposes on us poor blind humans the power, and with it the obligation, to see what we would otherwise miss. As we honor this immigrant American artist and, along with him, the medium we despised and neglected for so long, let’s take a moment to consider all the stories that are going untold, all the people that nobody sees, everything we’re missing, all around us. Thank you.