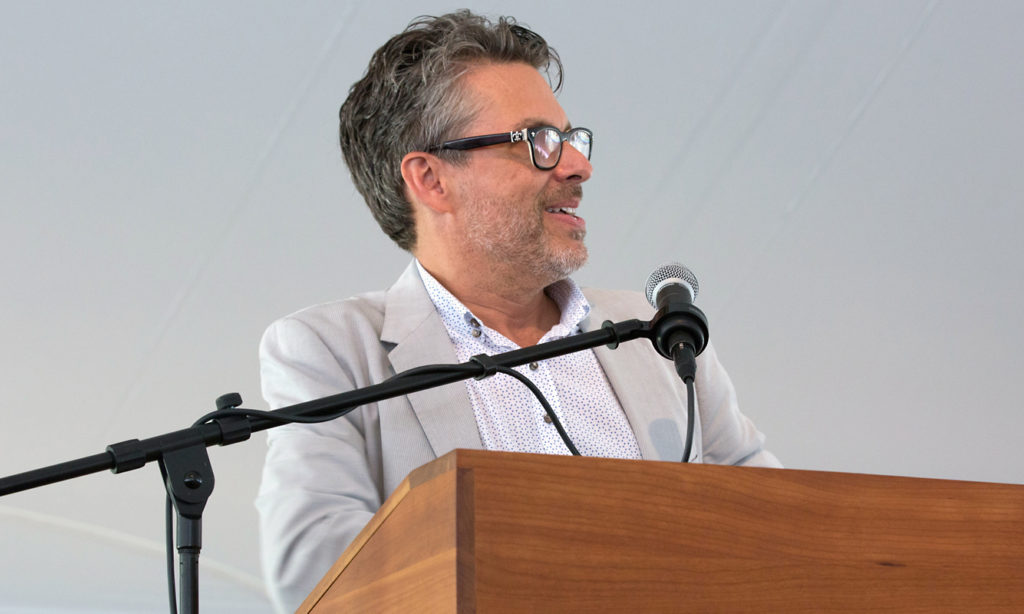 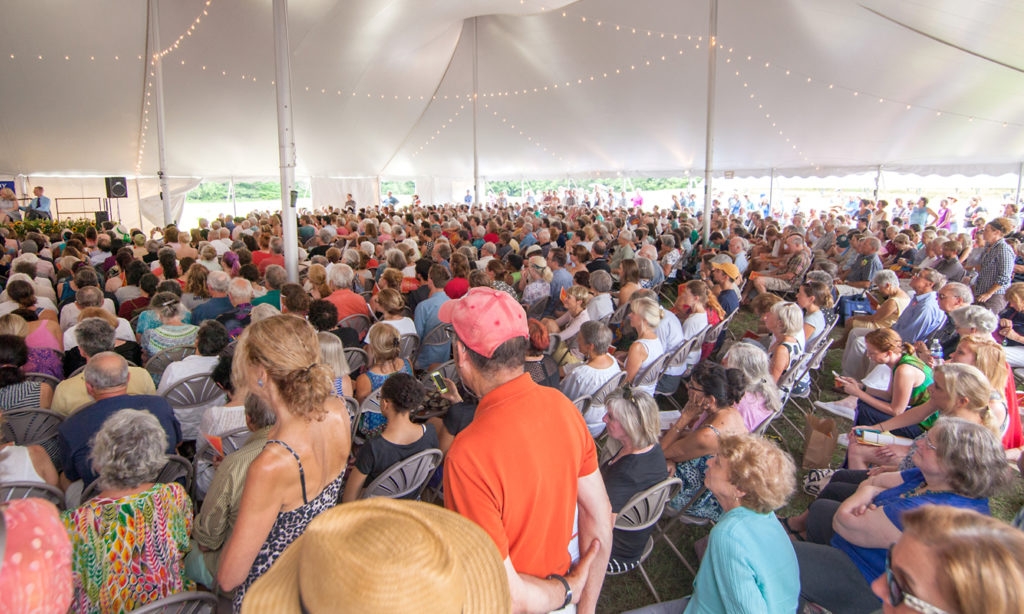 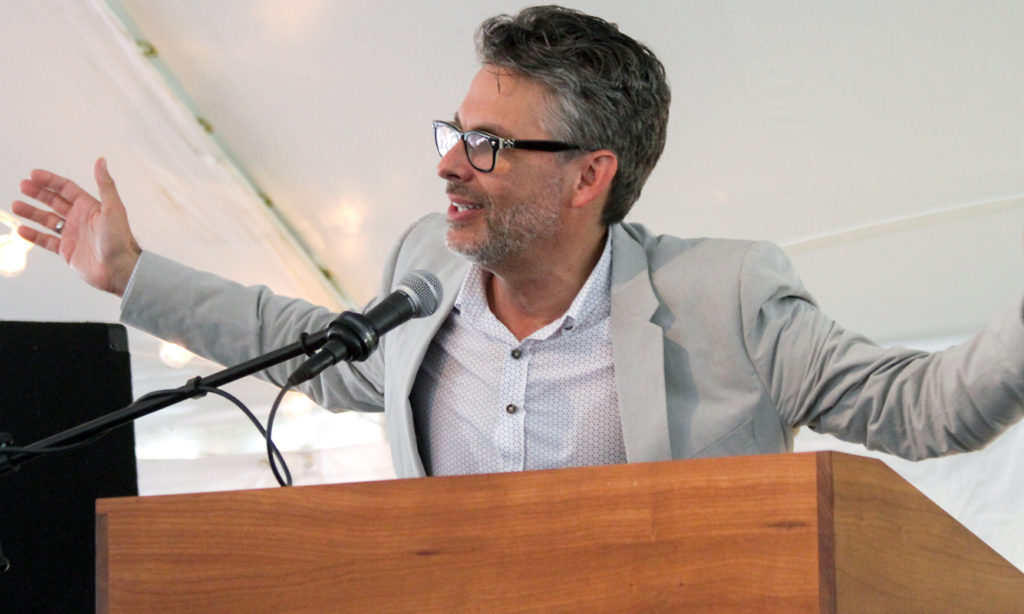 As a boy in the days of Vietnam and Watergate I considered myself a patriot—anti-war, anti-Nixon, but a patriot—and I believed in the American Dream.

I don’t know exactly how I would have defined the word “patriot” at the time I was five, six, or seven years old. Some kind of compound of my love for the Constitution, for the “I Have A Dream” speech, for county fairs, Squanto, baseball, Johnny Appleseed, Harriet Tubman, the space program, the sound of Pete Seeger’s voice, and the way I used to get teary every time I read about the death of Abe Lincoln’s young son, Willie, during the darkest moments of the Civil War.

Then I got older, and Ronald Reagan happened, and I looked around at the people who were calling themselves patriots and I was like, Gag me, which is something we used to say at the time. I lost my illusions. I wised up. I started to think that the American Dream was just a PR campaign to get people to max out their credit cards and that Squanto was a sap who ought to have let the Pilgrims starve. I still loved my country, but increasingly that feeling was something akin to “tough love.” You could love America, I thought, without believing its lies or being satisfied by its excuses. You could sniff its breath and check its pockets and hold it accountable for its misdeeds without ever denying or repudiating its place in your heart.

The problem with living with skepticism like that, constant skepticism, is that over time it may begin to off-gas cynicism, which deposits around the heart like ice. You start to look, reflexively, for the story behind the story, the power behind the power, the money that underlies everything, and you are forced to conclusions like “wars are really about oil,” “policy is written by lobbyists,” etc. Cynicism is like that luminescent spray they use on cop-show crime scenes; the hotel room looks all nice and clean, but hit the UV light and you see the bloodstains glowing everywhere. I’m not saying cynicism is unwarranted; those bloodstains really are there. But that layer of ice around your heart can in time begin to feel awfully cold.

For me, the election of 2008—the candidacy and victory of Barack Hussein Obama—broke open the carapace of ice. I heard echoes of Lincoln and Dr. King. I threw myself into the campaign to get the man elected, and on Election Night I danced in Grant Park with my little daughter on my shoulders, and I was saying, Please, Rosie, never forget this night. And then a few months later, at the inauguration, Pete Seeger sang. And he was wearing a really silly hat.

My admiration for our president has not cooled, but I confess that since then cynicism has definitely returned to renew its wintry grip. The inequities of wealth and class are so grotesque, the hypocrisies so brazen, the profit margins on hate and fear so abominably fat.

So, let’s take a few minutes to ponder the American Dream.

Now, you might look at the extraordinary journey of a young girl named Chloe Wofford, who was born in a small industrial city on the Ohio shore of Lake Erie, where her mother was an Alabama-born domestic worker and her father was a Georgia-born sharecroppers’ son turned shipyard welder, and who grew into this extraordinary genius: the capacious mind, adventuresome heart and incomparable gift for language known collectively as Toni Morrison, and you might think, Well, duh: American Dream. The promise of equal opportunity, right? Of an equal shot at material prosperity, upward social mobility, a better life for one’s children?

This hard American Dream was the Dream of a hundred-odd English Dissenters huddled and storm-beset in a leaky boat on the Atlantic, bearing for a place where they hoped to be able, without interference, to worship their angry God in their peculiar way. It was the Dream of Huck and Jim adrift on the Mississippi, with no other wish in their hearts but to keep on floating, the sole citizens of their pine plank republic of equality, harmony and freedom. It was the Dream of Henry David Thoreau going into the woods, Brigham Young sighting the shores of the Great Salt Lake, the Beach Boys’ Brian Wilson doing his dreaming and scheming “in my room.”

And it’s the Dream that recurs, with inexhaustible variation, in Toni Morrison’s novels, each one a novel of community in isolation, of towns or neighborhoods or houses that are planets unto themselves, vibrant, violent, precarious, wobbling uncertainly between utopia and dystopia, between self-selection and ghettoization. It’s the Dream of the denizens of the tautly circumscribed yet deeply layered urban enclaves she depicts in The Bluest Eye, Song of Solomon and Beloved, and in the literally isolated Caribbean compound of Tar Baby, and even, perverted—the American Nightmare—in the lush hell known so cruelly, in Beloved, as Sweet Home. And it’s the Dream of the one hundred and fifty-eight black freedmen in Paradise (a novel replete with would-be utopias), who arrive in Oklahoma after a long, hard migration across the south to found the all-black town of Haven.

The American Dream: the unassuageable desire of a small group of oddballs to be left, at long last, in peace.

Everything you see around you today, every road, every studio you will visit, all the picnic baskets—every novel that has been written and painting painted and sonata scored, is the miraculous fruit of the resolve of one woman to ensure that one man might be left, at long last, in peace.

For years Marian MacDowell had devoted herself to fostering and supporting her husband Edward’s work as a composer. She had labored tirelessly to smooth his creative path, to fend off the importunities, personal and economic, of academic and everyday life. When he died, she was left with the modest income from his musical compositions, four hundred acres of pristine woods and farmland here, in Peterborough, New Hampshire, and a question: what to do with the rest of her life?

The key weapon in Mrs. MacDowell’s constant battle to see that Edward found some peace had been their summers here at Hillcrest, as the farmstead was originally known, and in particular a small, simple but comfortable studio which she’d had built for him in the woods. A cabin in the woods had worked for Thoreau, and it had worked for Edward MacDowell. Now, as Mrs. MacDowell recorded in a letter to poet Edward Arlington Robinson, I’m gonna see if the idea is scalable. I made that up, she didn’t actually say that.

It was, and they came, those American Dreamers, and do you know what they did? They dreamed America. So much of the work created over the years at MacDowell, and by artists strongly associated with the MacDowell Colony, has helped to shape, powerfully and lastingly, our idea of America and America’s idea of itself. Thornton Wilder in Our Town, Stephen Vincent Benet in The Devil and Daniel Webster, Dorothy and Dubose Heyward in Porgy and Bess, Willa Cather (My Antonia and Death Comes for the Archbishop), James Baldwin (Notes of a Native Son, Blues for Mister Charlie), Aaron Copland (Billy the Kid, Rodeo, Fanfare for the Common Man, Appalachian Spring), Leonard Bernstein (On the Town, West Side Story): these are the artists and the works that helped define the way we think about New England, New York City, the Deep South, the Prairie, the Southwest, the Far West.

So think of that, and look around you at the fruit of Mrs. MacDowell’s dream: Thirty-two beautiful studios, serving over three hundred artists a year: painters, novelists, composers, photographers, choreographers, sculptors, filmmakers, and poets. They come from all over the world now. They show up on the doorstep of Bond Hall, children of that deep, hard dream: to be left in peace among others of their strange and lonely kind. And every day Blake Tewksbury tiptoes up to their studio doors, with their lunches each packed into a picnic basket. He leaves the baskets on the doorsteps, and tiptoes away again.

Is that the American Dream? I don’t know. But it sounds pretty dreamy, doesn’t it?