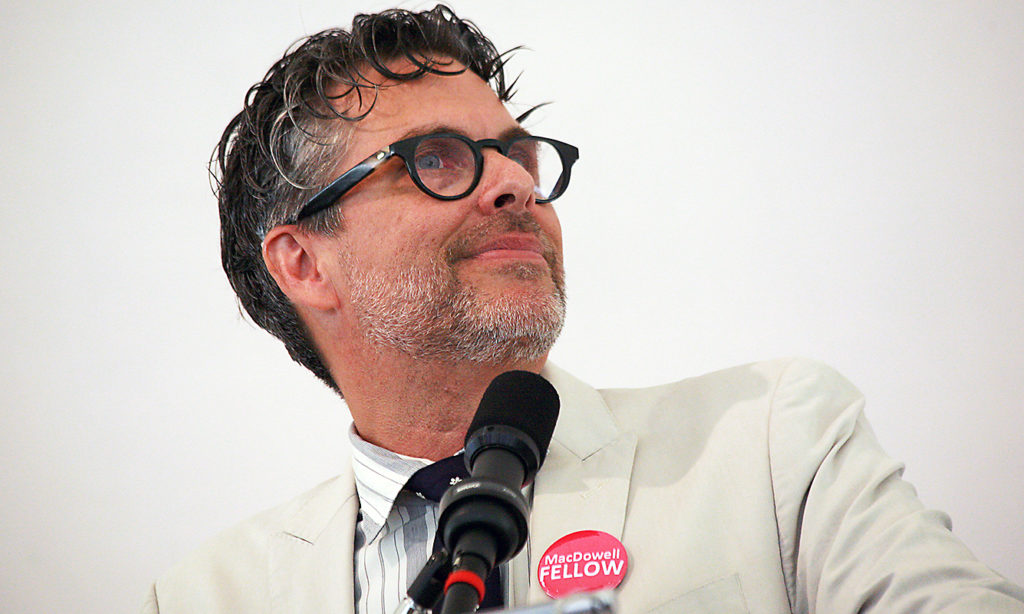 Transcript: Michael Cabon on three stages to the making of a work of art: the hunt, the transformation, and the release on the occasion of Medal Day 2014.

Forgive me if I seem to have a bit more swagger in my walk than usual, if I seem a bit more, shall we say, swingin'. But I've been working on a project related to Frank Sinatra for the past month, immersing myself in the man and his music--and, well, you know, they also call me "The Chairman of the Board."

And what's more, I actually am a Chairman of a Board.

This is my fourth Medal Day as Chairman: Edward Albee, Nan Goldin, Stephen Sondheim, and now Betye Saar. I'm not sure it would be possible to condense a greater sense of the range, intelligence, cunning, and fierceness of American art into a smaller span than that. Or maybe it is: Within the confines of these 450 acres, as you will see today when you tour the studios, 30-odd geniuses (and when I say 30-odd, believe me, I know what I’m talking about.) from all over the country and all around the world have been busy striking just as deep, just as far, just as fiercely, and just as hard at the boundaries and foundations of art, as those four great pioneers.

I'm proud to have been a part of that incredible intensity, that smoldering focus, as a Fellow and as Chairman, for the past 18 year now.

I'm also proud to be the guy who in a few moments from now gets to hand one of those medals to Betye Saar. The word "pioneer" does not seem quite strong enough to describe the startling courage she has shown, from the beginning, in making her presence known to the world, and it's neither a knock on the way in which medals get awarded nor, God forbid, a comment on Ms. Saar's age--it's simply the truth--to say this one is probably overdue.

While I was preparing for today's ceremony I came across an interview with Ms. Saar in which she told the interviewer that, in her view, there are three stages to the making of a work of art: the Hunt, the Transformation, and the Release.

I thought this was a fascinating model not just of her process, or of the process of artists generally who work in assemblage and collage, but of my own and perhaps that of most artists, in any discipline. I hope that Ms. Saar will forgive me if I take hold of her framework and run with it a little ways, the way my dog Mabel does when she gets hold of somebody's swim goggles.

Let us consider the three stages in reverse order.

The final stage, "The Release," is the briefest, and the weirdest, part of the whole business. It comes when the work--assemblage, poem, canvas, short story--is surrendered to the tender mercies of the world: put up for sale, given away, submitted for publication, abandoned in a drawer. Consigned, at times after years of labor, doubt and confusion, to its fate. This is the weird part because, first of all, it often involves money or questions of compensation, and money makes everything weird. It's weird because having your work exposed, at last, is kind of like what I imagine it would feel like to be trepanned, that moment when the tap of a very sharp chisel lets the light and air of the outside world flood in, revealing what had until now lain pulsing secretly in the dark. That has to feel pretty weird, right? "The Release" is also weird because it brings about situations like that of a painter friend of mine, a former MacDowell Fellow himself, who misses his paintings, once they're sold and gone from his studio, who kind of pines for them, and has even contrived, on rare occasions when it gets really bad, to track them down and go and visit them for as long as decency or their current owners will permit. I guess he hasn't quite yet grasped the whole "release" concept.

The middle stage of the process, the Transformation, is probably what most people think of when they think of an artist making art: the part where the artist turns tubes of pigment into haystacks at sunset, the remembered details of a tour of duty in Vietnam into a magic-realist epic, the notes of the diatonic scale into a sonata that leaves hard men in tears, or--in the case of Betye Saar--an antique washboard, an image clipped from an old magazine ad, a doll and a pair of vintage ladies gloves into an assemblage that is both a stinging indictment of, and a witty riposte to, a century and a half of pernicious pop-cultural racism.

The first stage of the artistic process that Ms. Saar talked about in that interview, the Hunt, is the most important, I think, and the one that tends to be misunderstood or completely neglected by non-artists and even by artists themselves. It's the part that people at bookstore readings are unwittingly referring to when they raise their hands during Q&A and ask an author--often an author who has not slept particularly well for several nights in a row--that dreaded question "Where do you get your ideas?" The fact that writers dread and despise this question so thoroughly may be proof that the Hunt is the least understood, and most important stage in an artist's process. And one of the many, many wondrous things about Betye Saar's work is that it exposes the importance of the Hunt to making art in a way that is readily grasped.

At its simplest, the Hunt might be defined as the period during which the artist assembles, accumulates, organizes, and prepares the raw materials that will, during the next phase, be transformed. For Betye Saar the Hunt is often, in part, quite literal: she haunts garage sales, secondhand stores, junk yards. I can actually report that she sent out some emissaries this morning to a local swap meet. She trains her gaze on curbsides and trash bins, rescuing what has been discarded or neglected to obtain material for her pieces.

But I would argue, and I hope Ms. Saar would agree, that the Hunt, properly understood, begins long before the first trip to the Salvation Army or the hardware store, before the first research is undertaken or the first interview conducted, before the canvas is bought and stretched and the paints mixed--long before the commission is ever received. The Hunt for the raw materials out of which art can be made begins before we even know we might want to spend our lives making it. The Hunt begins before we are born, with the experiences and memories, the skills and the scars accumulated by our parents, grandparents and great-grandparents, and it carries on, in earnest, from the day we are born, through all the years of our education (both in school and out), through the streets and houses of our hometown, through the pages of the books we read and the flicker of the movies we see and the endless hours of music we listen to. All of that provides us with raw material for the Transformation; they are all the spoils, and the quarry, of the Hunt.

When the time comes for the Transformation, if you're, say, Betye Saar, you are holding not just bits of glass and pottery, old furniture to reconfigure and old books and magazines to repurpose, but particular memories: of seeing Simon Rodia's magical towers rise from the alleyways of Watts, of your relatives' conversations and tribulations. You hold the expertise you gained by making enamel jewelry to sell at fairs when you were young, and that you gained by raising three bi-racial daughters in a racially fraught city. You hold your history of pain and love and sorrow, of slavery and emancipation, hope and disappointment, exclusion and marginalization, your history as a woman, your history as a reader of magazines and fairytales. All of that, taken together, is where you get your ideas. And now the Hunt is over, and it's time to get to work--no time to consider the mysterious possibility that all along it was not you who was doing the hunting, that in fact you are just the container, the basket in which some unknown hand has gathered all that raw material, that it is not the bits of flotsam or cans of paint or skeins of words but yourself that must now be transformed. And as for the Release...? Let's burn that bridge when we come to it. Thank you.