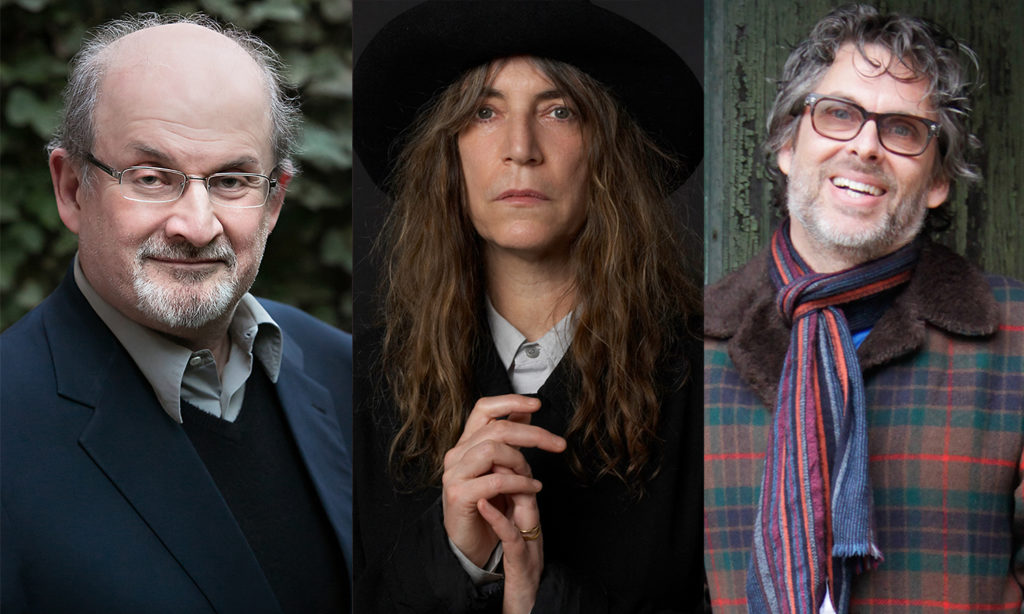 “Patti Smith and Salman Rushdie both exemplify the passion, daring, devotion to craft, and spirit of boundary-pushing that MacDowell has fostered since 1907, said Michael Chabon.”

Salman Rushdie enthusiastically added: “I’m thrilled with the chance to chat with Patti about life, art and rock ‘n‘ roll. I’m especially delighted to be able to do it for MacDowell -- an organization whose work on behalf of artists is so important.”

Salman Rushdie is the author of 13 novels, including the recent The Golden House, he 1981 Booker Prize Winner Midnight’s Children and The Satanic Verses. Knighted in 2007 for his services to literature, Rushdie is also the author of a book of stories, East, West; and four works of non-fiction, including his memoir Joseph Anton. He is a member of the American Academy of Arts and Letters, a Fellow of the British Royal Society of Literature and a Distinguished Writer in Residence at New York University. Rushdie has received many honors, including the Whitbread Prize for Best Novel; the Writers’ Guild Award; the European Union’s Aristeion Prize for Literature; Author of the Year Prizes in both Britain and Germany; the French Prix du Meilleur Livre Étranger; the London International Writers’ Award; the James Joyce Award of University College Dublin, and a U.S. National Arts Award. Rushdie’s stage adaptation of Midnight’s Children was performed in New York and London by the Royal Shakespeare Company, and The New York City Opera premiered an opera based upon Rushdie’s Haroun and the Sea of Stories at Lincoln Center in 2004. Rushdie’s books have been translated into more than 40 languages.

Patti Smith has been pushing boundaries in art, music, and literature since the 1970s and is among today’s most prominent multidisciplinary artists. Smith is a Rock and Roll Hall of Fame inductee, a four-time Grammy nominee and a Golden Globe nominee for the song "Mercy Is," from the film Noah. Smith’s 13 albums include her 1975 recording of Horses, which was inducted into the National Recording Registry at the Library of Congress in 2010. Smith’s artwork has been exhibited in museums and galleries worldwide and was the subject of "Strange Messenger: The Work of Patti Smith," a retrospective organized by The Andy Warhol Museum in 2002 and traveled to museums in the U.S and Europe. Smith is also the author of eight books including the acclaimed memoir, Just Kids, which chronicled her friendship with photographer Robert Mapplethorpe and received the 2010 National Book Award. Among Smith’s many honors include Commandeur des Arts et des Lettres from the French Ministry of Culture; ASCAP’s Founders Award, representing lifetime achievement; Sweden’s Polar Award for significant international achievement in music, and numerous honorary doctorates and academic distinctions.

Michael Chabon is a bestselling novelist, essayist, and screenwriter. He is author of the Pulitzer Prize–winning The Amazing Adventures of Kavalier & Clay and the Hugo and Nebula Award-winning The Yiddish Policemen's Union; as well as Summerland; The Final Solution; Maps & Legends; Gentlemen of the Road; the picture book The Astonishing Secret of Awesome Man, and Moonglow, just released in paperback. Forthcoming is Chabon’s collection of essays about fatherhood, Pops: Fatherhood in Pieces (HarperCollins). Chabon is also a screenwriter and lyricist. His musical projects include collaboration with Mark Ronson on the acclaimed 2015 album Uptown Special. Chabon lectures widely on the art and craft of writing, and on the Jewish fiction tradition. He is a 13-time MacDowell Fellow and has been Chairman of MacDowell’s Board of Directors since 2011.

Contemporary for 110 Years
The MacDowell Colony is a multidisciplinary arts organization that nurtures contemporary artists and advances the arts as a national value. Each year, 300 MacDowell Fellowships endow an extraordinary group of emerging and established artists with the freedom to create in residencies on MacDowell’s 450-acre New Hampshire property. This freedom has expanded creative boundaries for 8,000 artists, and developed a cultural legacy of works exhibited, published, and performed around the world. MacDowell community programs promote interdisciplinary dialogue, expand appreciation for artists, and engage a broader public with the creative process.