Peter Sellars Talks About the Triumph of Fine-Ness 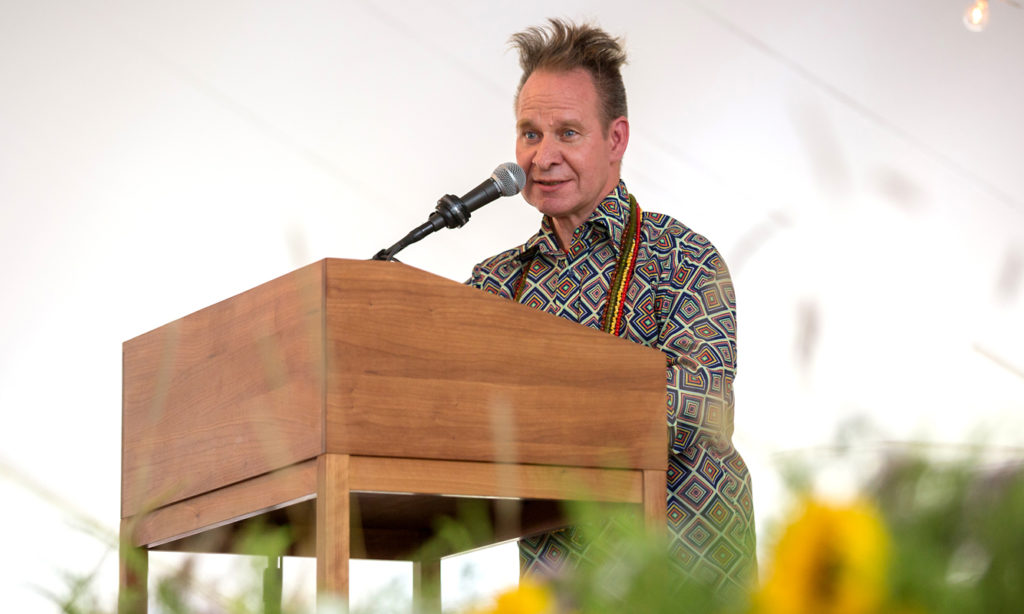 Transcript: Introduction of Toni Morrison at The MacDowell Colony on Medal Day 2016 as a writer who says difficult things in the most beautiful sentences ever written.

Hey fantastic people, nice to be here! Wow! Just a little warm in New England today, but OK, I’m sure some divine breeze is on its way. Yes! Meanwhile, may I just say it’s so moving to be here surrounded by this zone of creativity and beauty in the woods, and intelligent people in one large tent, thank you.

And for me that’s all you hope for from an author, is somebody who we love, but somebody who in loving them we actually feel recognized, and feel that someone has spoken, finally, words we couldn’t form at a time we couldn’t stand up and speak, words that needed to be said. And you know there’s a lot of smart writing and clever stuff going on, but not that much writing where you feel you won the prize. Where you feel you needed this book to go through the next week and the next year of your life. Where you feel some giant truth, which has never been uttered aloud in public, finally resonates across the planet. Done, not crudely, but with wisdom and sheer skill. Just sheer skill. Beauty of craft—sentence after sentence, saying difficult things in the most beautiful sentences ever written.

And to see this woman stand at the Swedish royal palace in front of the king and queen and express herself with such poise and such power and such utter clarity for the world, may I just say it was a great day for the Nobel Prize.

Because in Toni’s work, the stakes are high. It’s not ‘Oh, I like I like that book, but I didn’t like that book.’ The stakes are the facts of Black Lives Matter. The stakes are who fills the prison population, who’s not allowed to own their own home, who’s – I mean you could go on on that list, which lets you know that rhetoric of equality is so treacherous as to be evil at this point. Where the justice system itself now constitutes a crime against humanity.

How do you cut through that? How do you cut through this big established self-congratulatory monstrosity? And what does it mean, more powerfully, that juries can’t convict from Rodney King to Freddie Gray. What’s the problem? We have the video, we have evidence, we have a destroyed human being. Why are we not able to get any conviction on any of these cases? What is the jury’s problem with seeing a human being having been hurt? This is why in Toni’s books the stakes are high. Can we talk about Black America as human but also as having a real history, a deep history, a deep history that will not be glossed over, that cannot be glossed over, and a deep future.

Toni moves not in the manner of a court system through the forensics. Her system is called divination and prophesy. How do you come up with the stats on people whose history was never ever, ever recorded? You need to go deep. You need to go deep and you need to look into a human being deeply enough that you begin to know who the parents were. You need to find a very, very deep way to listen and be with a human being so you look in their eyes and you see their past. And you look in their eyes and see their future. And the reason all these characters agree to be in Toni Morrison’s novels is they know someone will look at them fairly.

Now the powerful thing of course, we call these lives which we know from books like Isabel Wilkerson, and so on, when you realize what the struggles have been of black people just to do simple and normal things, what I think the Buddhists call spiritual heroes, just because it took something super human in order to be human. You had to reach way above and beyond yourself, and way deep into yourself because you don’t have stuff. Everything you are is what you are carrying with you at this moment. And all the people who made it or didn’t make it, who are still inside you. All the ghosts of the undead and the unborn, who you are carrying with you. You own nothing but those ghosts. And every minute of every day you are improvising brilliantly. Brilliantly. Improvisation after improvisation.

And in the case of Toni Morrsion’s literature that takes the form of that brilliant African and African-American tradition, which is formal playfulness. She’s not telling the story the way you read it in the newspaper. The story is formally dazzling. There’s a bunch of stuff she’s not going to say. There’s a bunch of stuff that goes unmentioned. And a bunch of unmentionable stuff that is mentioned. She is enjoying her riff and as you’re reading her book you say, oh my God, that sentience is for clarinet. That sentence is for saxophone. That sentence is an entire percussion battery. You say that sentence could only be written by a great dancer, the way it moves, lifts, spins, turns, dazzles you and is cool and sexy. And this genius to take what would normally be a sad story and create an occasion for joy, celebration, miraculous amazement, and your breath taken away, and then the space is left for you to meditate on your own life. Hello, that is pretty overwhelming. Toni has addressed the gap in our histories, in our stories, and in our selves. All that missing material that we don’t know how to tell ourselves, or admit to, or that we’ve deliberately forgotten. And the force of amnesia is so intense these days ... how do you push back and say: We didn’t make this stuff up, this happened. Well, you have to express it in a way that’s so vivid that it can never be erased again. And you have to express it, not with a fist, because every act of violence becomes its own self destruction. So you have to express it with just sheer elegance, delicacy, fineness, and I think if Toni Morrison stands for anything it is the triumph of fine-ness. How fine can a human being be? Very fine.