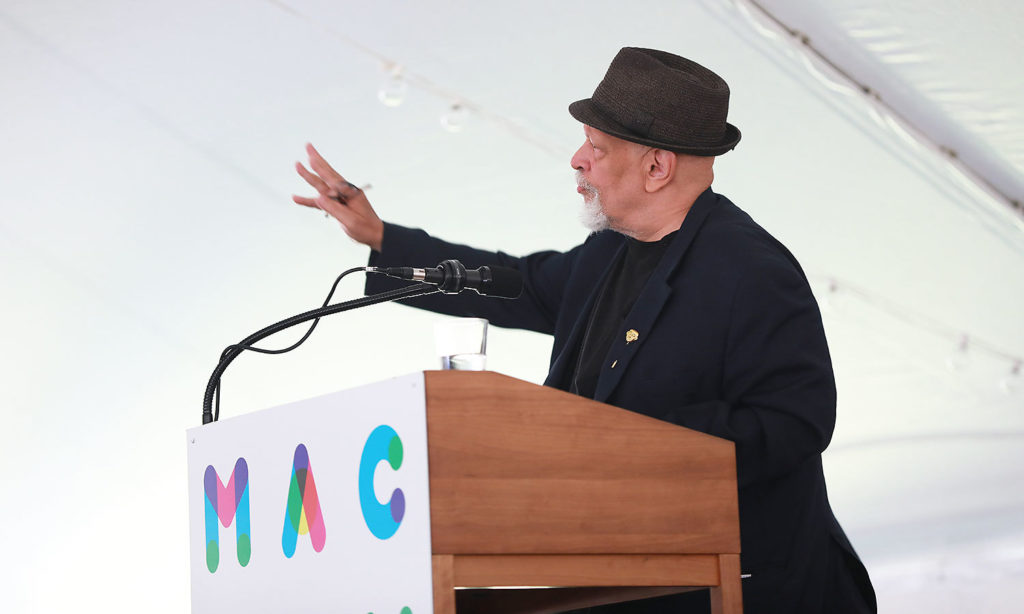 Speaker and MacDowell Fellow Walter Mosley gestures from the podium during his introduction of 62nd Edward MacDowell Medalist Sonia Sanchez.

Hello, nice to see you there today.

You know, I always pride myself on doing introductions of anybody in a page – I can do it in a page. I did it with Angela Davis, I did it with Melvin Van Peebles, you know, I had a page and I read it. I have, actually, three pages for Sonia Sanchez. [laughter] But part of it I won't have to say because of that quote that was just read is in my thing here. But that's okay.

It's a great honor to be at MacDowell and in New Hampshire and especially here to honor Sonia Sanchez. She is an extraordinary person who gathers her humanity around her, like the magnificent plumage of the golden-crested crane, pink flamingo, or sacred ibis, and all the other ripe high-flyers of Africa.

She, Miss Sanchez, encompasses the history and hope of Black Culture in America and Africa, in South America and the Caribbean, anywhere where the slave routes once flourished and flourish still. She is our poet, playwright, songstress, storyteller, dancer, mother to her own children and any other motherless spirit who passes near her complex organ. She's an ordained stutterer, a Titan, a revolutionary, and a dedicated daughter who has known sacrifice the way any warrior does, protecting her blood with her life. Anyone coming into contact with Sonia quickly learns that she has a commitment to truth and love and the rights we have fought so hard for. She stands up for herself, her people, and all people who live and breathe and love and lose. If death frightens her, she doesn't show it. If friends need her, she does not shirk. Miss Sanchez is a wonderful poet. Her tanka and haiku work is both transcendent and ordinary. A state that every poet strives for. Her poem “This is Not a Small Voice” sings to and reminds us that poetry is politics, poetry is people, poetry is Psalms that are liberation songs that stubbornly survive to grow. Her poetry reflects a life that like meditation is a lifelong, 24-hour-a-day profession of life.

Here's an excerpt from one of her poems about a child of the Black Arts and Liberation movements:

“the day i heard the sound of your death, my brother

i walked outside in the park

we your mothers wanted to see you safely home.

i remembered the poems in your mother's eyes as she

panther-laced warred against the state;

the day you became dust again

we your mothers held up your face green with laughter

and i saw you a child again outside your mother's womb

picking up the harsh handbook of Black life;

the day you passed into our ancestral rivers,

we your mothers listened for your intoxicating voice:

and i heard you sing of tunes bent back in a

against black (get back)

against black (get back)”

She has won many awards including this one today: The Jackson Poetry Prize, PEN Writing Award, American Book Award for poetry, National Academy of Arts and Letters Award, The National Education Association Award. She has received the Peace and Freedom Award from the Women International League of Peace and Freedom, The Pennsylvania Governor's Award for Excellence in the Humanities, the Langston Hughes Poetry Award, The Robert Frost Medal, the Robert Creeley Award, the Harper Lee Award, and the National Visionary Leadership Award, among many others.

She was a leader, among leaders in the Black Arts Movement. She was, and is, a warrior against war. She is a child of risk and a mother to hope.

In the dictionary of literary biography, Kalamu ya Salaam said, “Sanchez is one of the few creative artists who have significantly influenced the course of Black America, literature, and culture.” Then I was gonna say what was said before… So, I'm going to skip that.

When Etheridge Knight died, a whole bunch of us got together to do readings of his poetry and we were all asking, “well, which poem should we read?” And they’d say, “Oh, it doesn't matter. If you read one of his poems and somebody else reads the same poem, it won't be the same poem, so don't worry about it.” So, I don't mind copying things, but I have two other things to say.

The first is something Sonia has never heard before. The second is something I always say about her. The first is something I’ve never told Sonia before. It is that when I read her poetry, when I think of her journey, I am reminded of all things Galway Kinnell. Not the man, not even the poet, not really, but just of his poem about poetry, “The Bear.” A poem, for me, that is about someone who hunts down something that lives and breathes and bleeds and dies. A poem about a fate that none of us can escape. It is that inescapable fate that Sonia Sanchez sings about and exalts.

Just one other thing, you know, that I always try to say this about Sonia, is that you can like somebody's poetry and not like them. I mean, that's easy, right? There's a lot of poets who are assholes, I mean, that's just a fact, you know. And what you going to do?

But one day, years and years ago, Sonia was leaving. She was going back to Philadelphia. She was taking care of her father. And I said, “Well, all right, I'll take you to Grand Central Station.” So, we got on the subway, and we went up to Grand Central. It was rush hour, there were thousands of people there and, you know, it's hard to see Sonia among thousands of people. She's walking around, we're moving things, but this really tall guy, a young black man in a uniform, all of a sudden just saw her and he ran up and he said, “Ms. Sanchez?” and she said, “yes, my brother?” and she reached out to him. He said, “listen, I just saw, you know, I've been thinking about you, I've been dreaming about you and I've been praying. My sister – my sister is pregnant. And he was trying to think of the next thing to say and Sonia said, “does she want to have that baby?” And he said, “yes. I think she does Ms. Sanchez.” And then, she took out a piece of paper. “This is my phone number. I'm going to be home by 11:00 tonight. You have her call me any time after that.” – Sonia Sanchez.