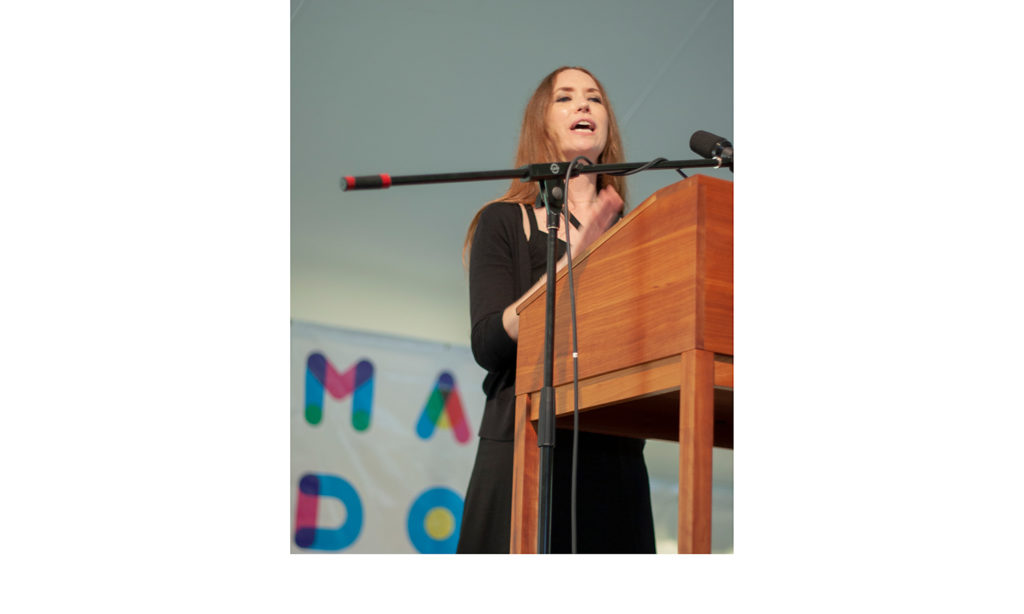 It is my great honor to be here at the MacDowell Colony — a place where both my mother and my grandmother were Fellows — to say a few words about the remarkable career of world-renowned cartoonist Art Spiegelman, my friend, mentor, collaborator, and an unremitting source of intellectual inspiration. It’s an important day also to celebrate the productive expansion of MacDowell’s own categories: this is the first year, as Michael has noted, that the Edward MacDowell Medal will go to a cartoonist, inaugurating the new award category of “Comic Art.” Comics is a medium that has never had as many practitioners and enthusiasts — and has never drawn as much interest from all corners of culture—as it does right now.

(Please excuse my quick excursion into the professorial: but however awkward it can sound in a sentence, I use “comics,” as I do other art forms such as film, painting, and prose, with a singular verb when appropriate, to the consternation of my editors everywhere.)
(crowd chuckles)

And this robust, diverse, and largely enchanting comics field that we now have and probably even take for granted as a beating heart of contemporary culture is inconceivable—impossible—without the decades of work created by Art Spiegelman that model just how moving, sophisticated, intricate, mysterious, and profound comics can be. Spiegelman’s friend Neil Gaiman sums it up, I think, in writing to me: “We do not come away from Art as we came to him.” As the cartoonist Gene Luen Yang memorably put it in our deliberations, “Art is close to where the concrete was poured.” Art Spiegelman started changing American idioms of expression — re-conceiving what comics could do and what they could be — back in the 1960s and 1970s, during the heyday of underground comics, a countercultural publishing movement in which comics were produced and distributed independently, without any commercial strictures, specifically to seek adult audiences. Forty years ago, in 1978, Spiegelman explained: “For me, when I use the words ‘underground comics,’ I mean work that will wake you up, work that allows you to be able to see more, to become more receptive, more alive.” Comics in the Spiegelman vein propose what Viktor Shklovsky named the fundamental device of art: permitting a “new seeing” of reality instead of a mere “recognizing.”

No one has done more to reveal the complexity and power of comics than Art Spiegelman, an artist, editor, curator, publisher, public intellectual, and historian of the form. From Spiegelman we have had, so far, if you can believe it, 50-plus years of comics that continually break the mode and push the medium in new directions.

We see this with the 1978 volume Breakdowns, a collection of his underground-era comics. A review that year in the publication Alternative Media, titled “James Joyce, Picasso, Stravinsky, and Spiegelman: A Portrait of the Cartoonist,” puts it well: “… without relinquishing the native virtue and idiom of the comic strip, its wit and realism, [he] has treated the popular art form as a ‘serious’ one and belatedly ushered it into… Modernism.”

Spiegelman himself mused in a later interview: “In comics, formal energies hadn’t been tapped, although they had in all the other arts—literature, painting, sculpture, music…. Here was this young medium, that, in a sense, was the last bastion of figurative drawing. As a result, nobody had become preoccupied with the issues that preoccupied modernist art elsewhere.” In the era in which comics were being reinvented as specifically for adults and not just inclusive of them — “Adult Intellectuals Only!” was the tagline on one of Robert Crumb’s famous underground comic books — Spiegelman invited readers to encounter the page as an aesthetic and even architectural unit, a small masterpiece of built space, something to decode and ponder. Influenced by non-narrative film, but committed to the printed page, Spiegelman’s comics focused on how the form represents time — in boxes, or panels, of time — as space, as in the framed moments that are juxtaposed on the page in meaningful relation. Could time be slowed down, run backward — or even stopped? Could time proliferate and overlap? Spiegelman brought the rigor of modernist experiment to comics. He created, along with others, a comics avant-garde of which he was at the forefront.

But speaking of readers: Art worried after the esoteric, experimental Breakdowns he wouldn’t have any. And he was compelled by the idea of “comics that needed a bookmark”: a long-form story that would be as tightly architected as his dense one-or two- or three- pagers in Breakdowns, but that would present a narrative through what he once called “the secret language of comics” instead of openly deconstructing the narrative on its face. Breakdowns includes a three-page story, titled “Maus,” about his Polish-Jewish parents’ memories of the Nazi death camps. It also includes, in a radically different, German Expressionist style, a four-page story of grief and guilt, “Prisoner on the Hell Planet,” about Spiegelman’s survivor mother’s suicide when he was 20. These two short autobiographical pieces, from 1972, are seeds for what would become a 13-year process of drawing and writing the book Maus: A Survivor’s Tale, which presents, through Vladek Spiegelman’s testimony, the story of Art’s parents’ experience in Poland during the Holocaust, and in New York City after — and also, crucially, the story of a young cartoonist struggling to understand and specifically to visualize in comics form what Art once called, in a notebook from the time, “the center of history’s hell.” A digest-sized, black and white two-volume comics work that features the abstraction of an animal metaphor, presenting Jews as mice and Nazis as cats, Maus blew the whole field open — along with the boundaries of art and literature more generally.

The subject, I believe, of all of Art’s work is the weight and movement of history — what he describes in his startling and significant book In the Shadow of No Towers, about his experience witnessing the 9/11 attacks — as “that fault line where World History and Personal History collide.” So what is it like to read Spiegelman? The cartoonist Lynda Barry wrote to me this week about her “feeling about the raw edge of time being right there where ever he is” — this is a feeling one gets in the presence of Art the person, but also in the presence of his marks, his panels, his pages, which feel paradoxically lively, and yet perfectly distilled and economical. As we see in Breakdowns, Maus, and In the Shadow of No Towers, to name just a few examples, the grammar of comics — boxes, balloons, tiers, gutters, bleeds — shapes itself to express often dark historical realities, along with the persistence of the past, its interpenetration with the present.

I had the pleasure of working with Art, for upwards of five years, on the book MetaMaus, which is about the historical, stylistic, and familial research that went into Maus. The anchor of the book is a long interview that we recorded over a period of years and then edited. Two of my favorite quotes — and it’s really hard to choose just two —from MetaMaus illustrate what Spiegelman has done to change culture’s sense of what is representable and how. The first demonstrates something I have always admired about Art: his imperviousness, no matter what the situation, to trends, and his unwavering commitment to his own convictions. Art is never scared to have an unfashionable opinion, (laughter) never scared to be honest. Making a comic book about the Holocaust in the 1980s, when Maus I came out, could have been considered risky; it was by others. In MetaMaus Art told me, “I was at The Frankfurt Book Fair when [Maus I] came out, and was aggressively barked at by a reporter, ‘Don’t you think that a comic book about the Holocaust is in bad taste?’ I liked my response. I said, ‘No, I thought Auschwitz was in bad taste.’ ”
(applause)

Spiegelman has always had the guts to take comics — and himself — seriously, regardless of the outcome. My second favorite quote from MetaMaus, and one I think about often, is simply, “history is far too important to be left solely to the historians.” Comics concretizes history in its series of marks while pressurizing concepts of linear time, and transparency, through its succession of self-consciously framed moments and its constant interplay of presence and absence.

One of the everlasting values of Spiegelman’s body of work is how it confuses categories, often smashing together idioms that are conventionally opposed, making them touch and interact. We see this in Maus’s mix of the abstract — which is to say the animal metaphor that runs as a visual conceit throughout — with its meticulous attention to researched, realistic, and even granular detail, as in the diagrams of ghetto hiding places and how to repair boots in Auschwitz. Famously, Maus II was shifted from the “Fiction” side of the NYT Bestseller list to the “Nonfiction” side after Spiegelman complained.

“I know that by delineating people with animal heads I’ve raised problems of taxonomy for you,” he wrote. “Could you consider adding a special ‘Nonfiction/Mice’ category to your list?”
(laughter)

We also see this in his decades-long career at Topps Chewing Gum, where he began working at age 18 and where he created novelty candy and gum products like Wacky Packages and the infamous Garbage Pail Kids stickers, which perhaps needless to say were a massive hit in the 1980s. Spiegelman’s association with Topps lasted through the publication of the first volume of Maus, proving that one can be, and perhaps ought to be, at the same time both a skilled avant-gardist tackling the center of history’s hell and a skilled commercial satirist for the prepubescent set. It shows his enormous ability, which is a defining feature of his work, to capture both solemnity and humor, and their imbrication. Further, while Spiegelman is deeply invested in print — in the democracy of reproducibility — his comics have also been exhibited in countless museums and gallery shows and exist in the context of the art world, as in the famous 1991 show “Making Maus” at the Museum of Modern Art, curated by Robert Storr. The existence of Spiegelman’s comics asks us to reconsider long-operative classifications across contexts, to question taxonomies, as was evident in 1992 when the Maus series won a “Special” Pulitzer Prize. Spiegelman hasn’t only changed, forever, the field of comics: he has changed, forever, postwar American culture, period, because his comics have expanded our sense of what literature and art mean, de-familiarizing their words and images — particularly those of history.

Spiegelman is responsible for so much — all of it stemming from his passionate commitment to comics — that has shaped how culture expresses itself, often in moments of controversy or grief. For the sake of time I’ll note quickly just a few further achievements. These include the field-defining RAW magazine, which he edited and published with Francoise Mouly for over a decade; his contributions to The New Yorker, consisting of countless essays, comics, and covers — including his famous black-on-black 9/11 cover, executed in collaboration with Mouly; and his incisive essays, such as his 2006 cover piece for Harper’s, titled Drawing Blood, which got the magazine banned in Canada.
(laughter)

[It must be hard to get banned in Canada] I want to end by noting one of my favorite projects, appropriate for an enduring arts organization like MacDowell. It is a 50-foot stained glass window Spiegelman created for the High School of Art and Design in New York City, his alma mater. This 17-panel installation — like comics but in glass — features an artist at work in environments representing the past, present, and future and is titled, with typical Spiegelman emphasis on time, history, and futurity, It Was Today, Only Yesterday. I am thrilled that today Art Spiegelman will receive the first Edward MacDowell Medal in Comic Art. Thank you.

Watch video of Art Spiegelman’s acceptance of the Medal here