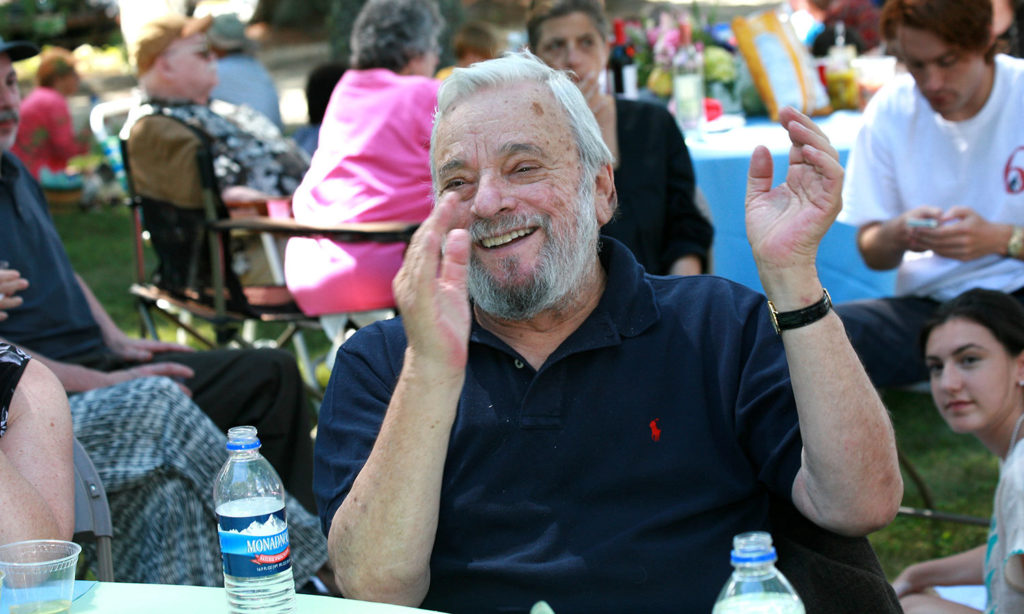 Stephen Sondheim reacts to a group of young fans serenading him with one of his countless songs written for the stage after being awarded the 2013 Edward MacDowell Medal on August 11, 2013. (Photo by Joanna Eldredge Morrissey)

I first met Stephen Sondheim at his home in New York City, a few months before I was to hand him the 2013 Edward MacDowell Medal in a ceremony at MacDowell, in Peterborough, NH.

I was starstruck and stupefied, that first time; he would have none of it. I desperately wanted to tell him what Pacific Overtures and Sweeney Todd and Sunday in the Park with George meant to me; he always deflected that conversational tack by asking me something about my own writing. (He had listened to and — he said — enjoyed the audiobook of my novel The Amazing Adventures of Kavalier & Clay.) Getting the point, I abandoned any hope of trying to convey how much I revered him and his work, and settled in, for the rest of the time we knew each other and, too rarely, spent together, to enjoy the incomparable pleasure of his company.

He seemed to have at least one opinion on every topic, and at least two sharply-drawn, often sharp-tipped, anecdotes to go with it. He had met (or had skillfully managed to avoid meeting) all the bright (and low) lights of theater, film, music and the arts over the past half century and more. He had broken his wrist a year or so before we first met, an injury that left him in pain and all but unable to play piano — an ability I’m not sure he ever completely recovered — and every time I saw him I could feel how that loss saddened and worried him.

I’d been expecting acerbic and judgmental, and hoping for charming; and I got all that, though mostly the last. But I had not been expecting so much sweetness, and warmth, and tenderness of expression about people he had known, cared for, worked with. And I had not expected him to be quite so very kind, so generous with his time and attention. When I invited him, in 2014, to join me for an onstage conversation with Paul Simon, as a benefit for MacDowell, Steve said yes instantly. He always replied immediately to every email I ever sent him — on his birthday every year, when I finally saw the film he wrote, the (kind of awesome) meta-whodunit, The Last of Sheila, or when I woke up one morning, this past September, and inexplicably began stomping around the house singing “Four black dragons! Spitting fire!”

Tonight when I asked my younger daughter, now 20, what she remembered about having met him that summer in Peterborough, she said immediately, “I remember that he actually seemed like he wanted to know the answers to the questions he asked me.” Right away, I remembered that, too: the sweetness, the radiance of his attention, lavished on a being who had come into the world when he was already in his seventies. The evident curiosity in his questions to her. His taking the time to be kind.

It’s that kindness — the generosity of his willingness to share with you the thrilling gift of his attention — that I keep thinking about, as I remember him. It was really another form, I think, of the epic capacity for taking pains that made his lyrics matchless and imbued the beauty of his music with such rigor, and which rendered him one of the greatest American artists of the 20th century.

Of the many times I saw him bestow that gift, in the course of our all-too-brief acquaintance, one shines brightest in my memory. Among the several thousand people who had turned up at MacDowell for the medal ceremony that August was a local glee club, a group of a dozen or so young women — high school girls — who had been working for months to arrange, learn and perfect versions of several beloved Sondheim songs. Beloved, that is, by them. These girls were passionate, scholarly Sondheim fans, and had set themselves to master some of their idol’s most challenging and complex songs.

They’d asked permission beforehand to perform at the festivities, as a gift to their New Hampshire friends and neighbors and to all their fellow lovers of Sondheim. That afternoon, during the picnic lunch that followed the medal ceremony, they strolled around the green lawns, serenading the picnickers with selections from many of his shows.

Toward the end of that afternoon, I was sitting with Steve at an otherwise empty table, in the shade, off to one side. He’d started his day early, and worked hard all morning and afternoon, enduring speeches and making one of his own, freestyling gracefully through the steady tide of fans, admirers, well-wishers, and people, like me, whose lives and views of life, art, love and music had been revolutionized by their encounters with his work.

He was old, and recovering from a painful injury, and feeling a little weary. His feet were sore, and his legs were tired from standing so much. It was a warm afternoon. Conversation was faltering. Then his ears pricked up: he heard music. Female voices rising and falling in complex harmonies on the summer breeze. I pointed out the girls, arranged in a half circle across the grass from us, and explained that this was the local singing group he had no doubt heard about from many people that day. He caught sight of them. “They’re so young!” he marveled. He listened. He listened fiercely. He looked amazed.

“They’re doing Booth!” he said, shorthanding the title of one of the best numbers from one of his thorniest shows, Assassins. He listened some more. Critically. Obviously passing judgment on what he heard. “That’s an interesting arrangement,” he added. Then slowly, creakily, wincing a bit, he hoisted himself to his feet. “I must go and thank them. And tell them how honored I am. They’re doing a nice job!”

Then, resolute as a man on a lifelong mission in his kindness, meticulous in his generosity with young artists, performers, and admirers as in the practice of his art, he worked his way with slow determination across the lawn, to do what that art had always done: to make it all — love, work, passion and, especially, life — feel worth it. And to blow a few more minds.

*This essay was first published on medium.com