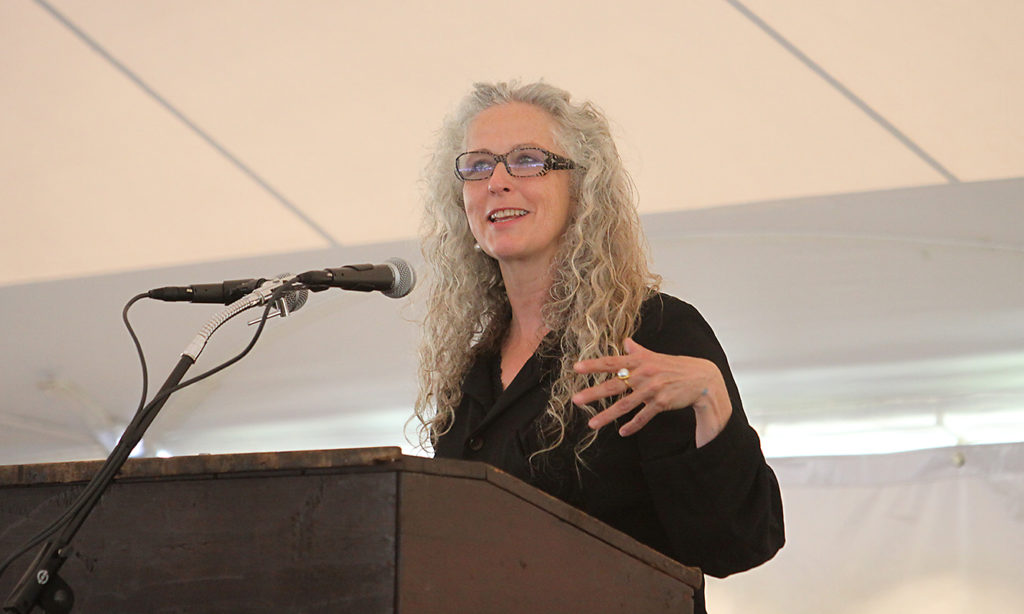 The Colony grounds and artist studios are open to the public for the daylong festivities and celebration.

FOR IMMEDIATE RELEASE -- May 8, 2009 – The MacDowell Colony, the nation’s leading artist residency program, will present its 50th Edward MacDowell Medal this year to visual artist Kiki Smith. The MacDowell Medal is awarded annually to an individual who has made an outstanding contribution to his/her field and this year marks a half-century of recognizing pivotal artists. Smith joins an impressive list of past recipients, including Georgia O’Keeffe, John Updike, I.M. Pei., and Aaron Copland.

The award will be presented in a public ceremony during the Medal Day celebration on Sunday, August 9, 2009, beginning at 12:15 p.m. on The MacDowell Colony grounds in Peterborough, New Hampshire. Robert MacNeil, chairman of The MacDowell Colony, will award the Medal, along with Carter Wiseman, president of the board, and Cheryl Young, executive director. Novelist, critic, and Colony Fellow Lynne Tillman will be the Medal Day speaker.

In naming Smith as the 50th Medalist, Joan Simon, writer, scholar, curator-at-large at the Whitney Museum of American Art, and chairman of this year’s Selection Committee, said, “The MacDowell Colony is a haven for artistic innovation and a catalyst for conversation and camaraderie among the many interested in the arts. In selecting this year’s Medalist, the committee shared these goals, and together with the Colony, we celebrate Kiki Smith for her vibrant, diverse contributions in many mediums. Over her long career, now in its third decade, she has reinvented the medium of drawing as a vehicle for reflection on gender and violence and has taken it from the personal to the political. Her extraordinary interest in craft brings together the heritage of surrealism with the medium of sculpture and installation. Her reach across media has been revelatory.”

Called a “leading figure among artists addressing the philosophical, social, and spiritual aspects of human nature,” Kiki Smith’s career has incorporated sculpture, printmaking, installation, and drawing. Her body of work has covered an equally diverse array of subjects, from the human body and domesticity, to classical mythology and folk tales. Life, death, and resurrection are leitmotifs in much of Smith’s work, and she is widely credited for treating the female form with extraordinary honesty and vulnerability.

Born in 1954 in Nuremburg, Germany, Smith grew up in New Jersey. After graduating from high school, she moved to San Francisco and lived communally before returning east and enrolling in Hartford Art School, where she studied film. In 1976, she moved to New York and supported herself as a cook, an electrician, and a factory air-brusher before joining Collaborative Projects (Colab), a cooperative artist group that worked outside the commercial gallery system. Colab launched a new aesthetic, one poised against the abstract art of the 1970s, marking a return to representation while aiming for an approach to art-making that emphasized accessibility to a wide public and artistic collaboration. It was during this period, which lasted until the late 1980s, that Smith developed her versatility and groundbreaking themes related to feminism, spirituality, and such issues as child abuse. “Valorizing the physical body as our primary means of experiencing the world, Smith sought to unravel its functions, marvel at its mysteries, and acknowledged its place within the wider environment,” wrote Wendy Weitman for the Museum of Modern Art in 2003.

Exhibiting with Pace Wildenstein Gallery since 1994, Smith’s work has been shown in 150 solo exhibitions, at such venues as the Solomon R. Guggenheim Museum, the Smithsonian, the Walker Art Center, and the Whitney. In 2005, she was elected to the American Academy of Arts and Letters; most recently, the Rhode Island School of Design honored her for excellence in printmaking.

2 3 Since the inception of the Edward MacDowell Medal in 1960, the Colony has awarded it among its seven artistic disciplines. Smith is the 14th Medalist in visual art, following such luminaries as Alexander Calder, Edward Hopper, Louise Nevelson, Isamu Noguchi, Louise Bourgeois, and Ellsworth Kelly. MacDowell has provided Fellowships to more than 1,700 visual artists, including Benny Andrews, Milton Avery, Qin Feng, Janet Fish, Faith Ringgold, and Eve Sussman. These visual arts Fellows join more than 6,500 artists from all disciplines who have worked at the Colony and whose works have benefited from a MacDowell residency, such as playwrights Thornton Wilder and Suzan-Lori Parks; composers Leonard Bernstein and Osvaldo Golijov; writers Willa Cather, Alice Walker, and Alice Sebold; and architects Les Robertson and Tom Kundig.

After this year’s Medal Day ceremony, Colony guests will enjoy picnic lunches on the Colony’s grounds, provided by the local and award-winning restaurant Luca’s, and current MacDowell artists-in-residence will open their studios to the public from 2 p.m. until 5 p.m. In celebration of the 50th anniversary of Medal Day, a youth program for families with children ages 7-13 will be offered. There is no charge to attend Medal Day. The MacDowell Colony is grateful for the support of Lincoln Financial Foundation, our Medal Day corporate partner, and the New Hampshire Charitable Foundation for its special grant for family programming.

Situated on 450 acres of fields and woodland in New Hampshire, The MacDowell Colony welcomes more than 250 composers, writers, visual artists, theatre artists, architects, filmmakers, and interdisciplinary artists from the United States and abroad each year. The sole criterion for acceptance is talent; a panel in each discipline selects Fellows. In 1997, The MacDowell Colony was awarded the National Medal of Arts for “nurturing and inspiring many of this century’s finest artists.”