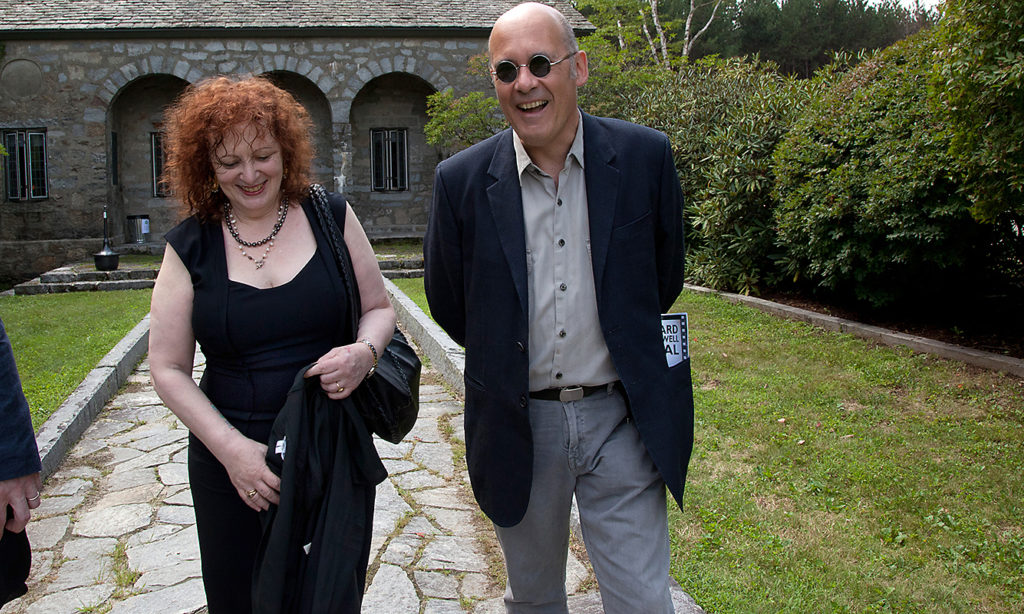 Goldin will be on hand to accept the award at The MacDowell Colony in Peterborough, New Hampshire, on Sunday, August 12th.

Peterborough, NH -- June 1, 2012 -- The MacDowell Colony, one of the nation's leading artist residency programs, will present its 53rd Edward MacDowell Medal to photographer Nan Goldin on Sunday, August 12th. Since 1960, The MacDowell Medal has been awarded annually to an individual artist who has made an outstanding contribution to his/her field. The award is rotated among the artistic disciplines practiced at MacDowell. Goldin joins an impressive list of past Medal recipients, including Robert Frank, Edward Hopper, Georgia O'Keeffe, Leonard Bernstein, Merce Cunningham, Robert Frost, and Edward Albee. Author Michael Chabon-- a MacDowell Fellow and chairman of the Colony's board of directors-- and writer and critic Luc Sante will speak at the public ceremony honoring Goldin.

"This is one of the greatest honors I've ever received in my life," said Goldin, who is best known for her provocative, blunt, and autobiographical work, which often depicts intensely personal moments and scenes. "To be named among the artists who have made the most profound marks of the past five decades is humbling."

In naming Goldin the 2012 Medalist, Luc Sante, chairman of this year's Medalist selection committee, said, "Nan Goldin's photographs of her life, her friends, and her family -- unflinchingly honest, nakedly emotional, sometimes brutal, but most often tender -- redefined the autobiographical use of photography and influenced everyone who has come after her. In addition, her use of the slideshow as a medium just about constituted a medium unto itself: halfway between still photography and cinema. Along the way, her approach to love, gender, and sexuality has forever altered the depiction of women and gay and transgender people."

Joining Sante on the Medalist selection committee were Curator and Associate Director at the Museum of Contemporary Photography at Columbia College in Chicago, Karen Irvine; Independent Curator and Writer Marvin Heiferman, who is currently a Creative Consultant for the Smithsonian Photography Initiative at The Smithsonian Institute; and Curator in the Department of Photographs at the Metropolitan Museum of Art, Jeff Rosenheim.

Born in Washington, D.C., Goldin began photographing at the age of 15. She received a BFA from the School of the Museum of Fine Arts in Boston in 1977; a year later, she moved to New York, where she continued to document her "extended family" via photography. These photographs -- along with those taken in London, Berlin, and Provincetown, Massachusetts -became the subject of her slideshows as well as her first book, The Ballad of Sexual Dependency (1986), an enduring visual chronicle of the challenges of intimacy between friends and lovers. Her work was included in the Whitney Museum of American Art's biennial in 1985; just a decade later, the Whitney held a major retrospective of her work, which then went on to tour museums throughout Europe. In 2001, a second retrospective of her work, Le Feu Follet, was held at the Centre Pompidou in Paris (the show toured internationally as The Devil's Playground). As part of the Festival d'Automne in 2004, her work Sisters, Saints, and Sibyls was displayed in Paris's Chapelle Saint-Louis de la Salpetriere. In 2010, Goldin spent eight months wandering the Louvre when it was dosed, taking photographs of artworks for a specially commissioned slideshow, Scopophilia. Her first solo exhibition in New York since 2007, the project was shown at her gallery, Matthew Marks, last year.

Goldin is the recipient of numerous prestigious awards, including a DAAD Artists-in­ Residence Program fellowship in Berlin, a grant from the National Endowment for the Arts, the Commandeur des Arts et des Lettres from the French government, the Hasselblad Award in Photography, and the Englehard Award. Her work has been published extensively, and her books include The Other Side (1993); A Double Life (with David Armstrong, 1994); Tokyo Love (with Nobuyoshi Araki, 1995); I'll Be Your Mirror (1997); Ten Years After (1997); The Devil's Playground (2003); and The Beautiful Smile (2008). She lives in Berlin, Paris, and New York.

Since the inception of the Edward MacDowell Medal, the Colony has awarded Medals to only three other photographers including Lee Friedlander (1986), Harry Callahan (1993), and Robert Frank (2002). In its 105-year history, The MacDowell Colony has provided Fellowships to almost 200 photographers, including Doug DuBois, Bill Jacobson, Rosalind Solomon, and Francesca Woodman

The Medal Day award ceremony honoring Goldin will begin at 12:15 p.m. on August 12th at the Colony, which will be open to the public for the festivities and celebration. Following the award ceremony, guests can enjoy picnic lunches on Colony grounds by pre-ordering Medal Day picnic lunch baskets (available for sale at www.macdowellcolony.org beginning in mid-June) or by bringing their own. Open studio tours hosted by MacDowell artists-in-residence will begin at 2:00 p.m. and end at 5:00 p.m. There is no charge to attend Medal Day. The MacDowell Colony is grateful for the support of our Medal Day corporate partner, Lincoln Financial Foundation.

Situated on 450 acres of fields and woodland, MacDowell welcomes more than 250 composers, writers, visual artists, theatre artists, architects, filmmakers, and interdisciplinary artists from the United States and abroad each year. The sole criterion for acceptance is talent; a panel in each discipline selects Fellows. A registered National Historic Landmark, The MacDowell Colony was awarded the National Medal of Arts in 1997.