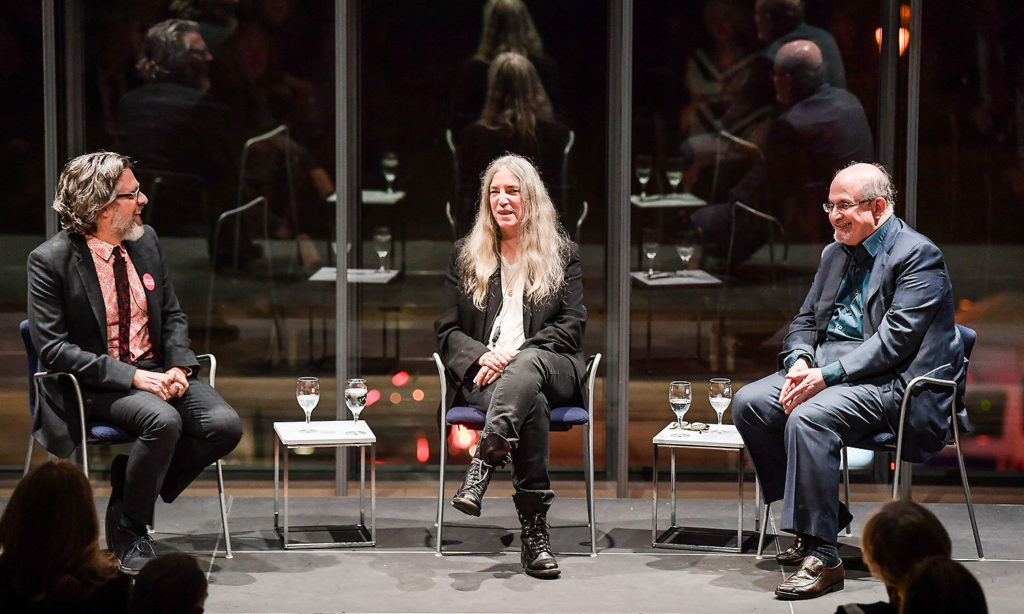 From left: Former Chairman of the Board of MacDowell Michael Chabon, composer and author Patti Smith, and author Salman Rushdie during a lighter moment in 2017. (Matthew Carasella photo)

Author Salman Rushdie (at far right above), who remains in serious condition after being stabbed at a writers’ event in western New York last Friday, graced the stage with then Chairman of the MacDowell Board Michael Chabon and artist Patti Smith at MacDowell’s 2017 Chairman’s Evening in New York. We join colleagues, organizations, and MacDowell Fellows around the world in condemning any violence aimed at the Freedom to Create and in wishing Mr. Rushdie success on his long road to recovery.

I first met Salman Rushdie, my friend, hero, and (largely unwitting) mentor, in 2002, for an onstage conversation sponsored by Rakestraw Books in Danville, CA. Salman was on the road that night in support of his short, thorny, sadly prescient novel Fury. It was a “rain check” event—we had originally been scheduled to do it on 12 September 2001.

I’d been waiting to tell Sir Salman how in 1997, after adoring The Moors Last Sigh, I‘d turned for the first time to The Satanic Verses, and found in it not only a magnificent novel but, in its presentation of the episodes that give the book its title, a magic clue to escaping a narrative box I’d been stuck in with the book I was then writing—how to present the comic book characters and mythologies created by Sam Clay and Joe Kavalier in a way that would make them feel “real,” as characters and as cultural artifacts, to my readers.

I‘d been waiting even longer to tell him how, when I’d first read Midnights Children as a budding novelist in 1985, I’d taken so much heart and inspiration from the thrilling changes rung in that book on Garciamarquezan magic realism; and even more from his obvious love of and comfort with science fiction (echoes of The Chrysalids and More Than Human) and—wonder of wonders!—comic books: the subtle but unmistakable signature of an X-Men fan. Nerd game recognize nerd game.

A prayer is just a wish with another wish on the far end of the line, but if thoughts can travel through darkness, over the cities and housetops and violent vastness of a divided and furious land, the way they do in Midnight’s Children, then maybe my wishes can find their way to Salman’s indispensable mind: Keep living, keep writing, keep hitting them with those mutant Cyclops eye-blasts of truth.