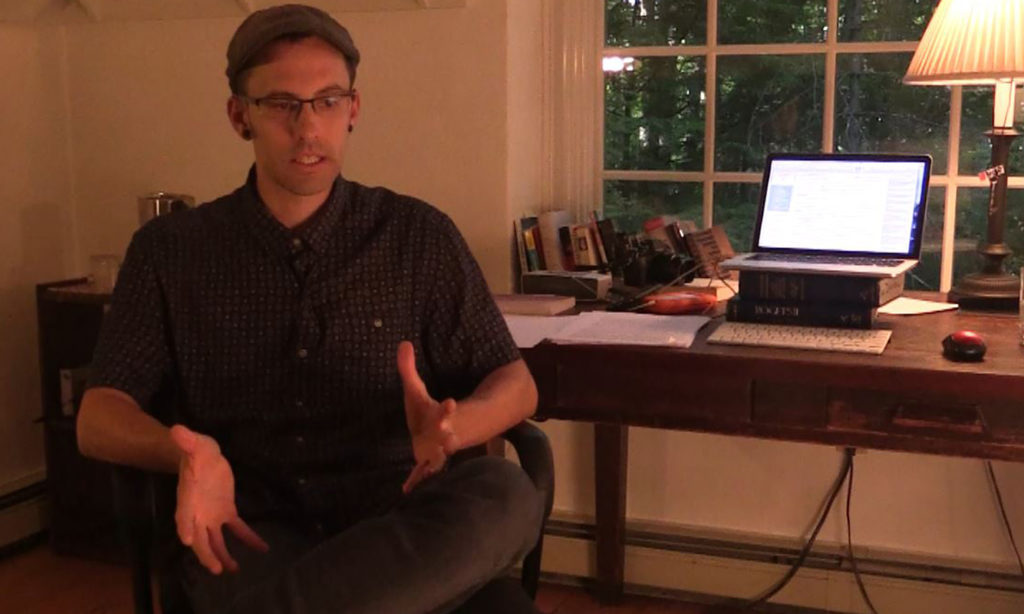 Journalist Shane Bauer came to The MacDowell Colony this summer to transform his recent blockbuster Mother Jones article into a book about the private prison system in the United States. Based on Bauer’s undercover reporting as a prison guard at the Winn Correctional Center in Louisiana, the story is an exposé that uncovers a number of dark truths about private prisons. The Mother Jones article, “My Four Months as a Private Prison Guard,” took over the entire July-August 2016 issue and coincided with a U.S. Department of Justice announcement that it was ending its use of private prisons. Bauer sat down with us for a Q&A to talk about his MacDowell residency, the importance of long-form journalism, his imprisonment in Iran, and the story behind the prison story.

Q: The DOJ’s decision came down two weeks ago. Did your article appearing in Mother Jones have something to do with the change in policy?

SB: The Department of Justice has not made that connection although I was talking to them in the lead up to that, talking to people from the Inspector General’s office. While I’ve been at MacDowell, before this announcement was made, they invited me to do kind of a town hall style meeting to talk about oversight of these prisons. Others have made the connection, the media generally. The New York Times, The Washington Post, and others have pointed to this story. There are always so many factors, too many to be able to pin it down. The Inspector General came out with a report on this a week before the announcement to end the contracts that basically found or echoed the things that I had found. That these prisons are more violent. They don’t have the same programs that public prisons have. Really it has been the same findings for decades but this was a moment where there are starting to be decisions made to kind of change this.

Q: You were imprisoned in Iran in 2009 and accused of espionage. How did that inform your current reporting about prisons in the U.S.?

SB: I finished college and then moved to the Middle East, just to be able to freelance and really be there. You kind of have to be there to even get the ideas of what to write about. So I lived in Damascus and lived in Yemen for a bit, and took a trip with my girlfriend and a friend to Iraqi Kurdistan ... and we ended up unknowingly near the Iranian border and were arrested, and I spent two years in prison. I was imprisoned with my friend Josh Fattal and my girlfriend who is now my wife, Sarah Shourd.... We spent four months in total solitary confinement.

After a little over a year Sarah was released and she then was busy trying to get us out. She met with Hillary Clinton, and Barack Obama, Oprah Winfrey; whoever she could get a hold of.... Our captors said they knew we weren’t spies but our situation was political and we were going to have to wait for the two governments to work it out. After being there for two years, Josh and I went to trial. We ... were sentenced to eight years in prison and then we were released a couple months after that.

I kind of assumed I would be going back to the Middle East because that’s what I always focused on, but I started getting pulled toward prisons in the U.S., and did a story about long-term solitary confinement that I worked on for about nine months. I found that there were some 80,000 people in the United States in solitary confinement and some of them for decades.... Once I got into it the onion just kept unpeeling and there was just more and more and it got to the point that I felt that I couldn’t really do the story justice without going back inside in a way, which is why I did this project and became a prison guard.

Q: How did you get started in investigative journalism?

SB: I was a welder and I come from a working class family. I was the first person in my entire family to go to college. I worked for my dad who is a heavy equipment mechanic. I had various welding jobs for a while and then basically saved up money and traveled, and went to the Middle East and decided that I wanted to be a journalist. I have always read and been a reader, and been studious but didn’t even consider the possibility that I could be a writer. But I just started writing. I studied Arabic, went to college and then just kind of started on my own just freelancing and traveling and just finding my own stories, and did that for a long time and eventually started working for Mother Jones, which I have been doing for a couple years.

Q: How did your residency at The MacDowell Colony benefit your project?

SB: I wanted to ... be able to really flesh it out and bring it to life, which takes time. It takes time, not only to get that stuff, but also to write it, which is why coming to a place like this is so important. Just to have the time, where you have this massive material and just to sit with it and think about it, and get deep into it, and turn it over and not be distracted and just focus on writing. A lot of journalism is so focused on the gathering of information or reporting and in my opinion not enough attention is paid to the craft of writing and that is why I’ve come to a place like this, why I applied for MacDowell.

Q: We are constantly barraged with headlines and soundbites, and the pundits say on the consumer side we don’t have time to read because of all the options competing for our time. Does long-form have a future in today’s media landscape?

SB: Recently there’s been a move toward kind of Internet click-bait-type short stuff. A lot of journalists now have to turn out multiple stories a day, and it’s hard to even call that reporting in my opinion—when you don’t have time to really dig in and also to write, just pressure to publish. I think we're swinging the other way on some level. Mother Jones for this story dedicated the whole issue of the magazine to one story and there’s some risk in that.... People were really into it and I think it showed to me and to Mother Jones, and also to the journalism world in general, that people want this kind of stuff. They want in-depth reporting and there are spaces on the Internet where that’s growing. It’s not only in print anymore.... I meet journalists all the time who say that what they really want to be doing is writing long form. I think that’s pretty common. I think that the question is always the revenue, that’s what it comes down to, is how you pay for it because for this story, Mother Jones spent $350,000 on this project and recently my bosses published an article basically laying all that out and saying this is the problem with journalism right now. This story costs $350,000 and we got $5,000 in ad revenue from it. There are more than a million people who looked at the article, but you just don’t make money from internet ads. There have to be people actually paying for it and donating.

The thing I heard a lot after this article was published, in e-mails and on Twitter, and social media was people expressing their appreciation for the story but also calling it an old-school approach. People were saying that it was harking back to something, which is not how I thought of it. But to me that showed that a lot of people feel like something has been lost in the way that we do these stories. It used to be that magazines would do 30,000-word articles and I think what we're seeing from this is that people actually still want that. It’s not that people only have time to read something for a minute on their phone, they also have a weekend that they want to spend reading something long. It’s the same reason that people read books.

SB: A lot of things, actually. Something that has really stood out from my experience here is spending all of this time with artists of different kinds. Being in this setting has made me think a lot about form and that’s kind of been a theme for me. A lot of artists are focused primarily on form and a lot of journalists never think about it. When I see people’s presentations, I’m thinking about that. When I see other people’s work, I’m thinking about my own work. I’m having conversations about it. Having conversations generally, just talking to people about my work and about their work, I just get so much from that. It’s a new perspective. It gets me thinking about my work in different ways. I mean, having the time in the studio is of course great, it’s time to myself, but equally important is the time I spend with the other colonists.

I just love coming back to dinner at the end of the day and seeing people, and you know, the conversation. It’s always kind of a question—what the rest of the day is going to be like after that. I might see someone’s presentation, I might just hang out on the porch with people until midnight, I might just come back here and read and have a late-night writing session. The day up until then is a lot more predictable. I like the combination at MacDowell, the kind of predictability and unpredictability. It’s a good balance.