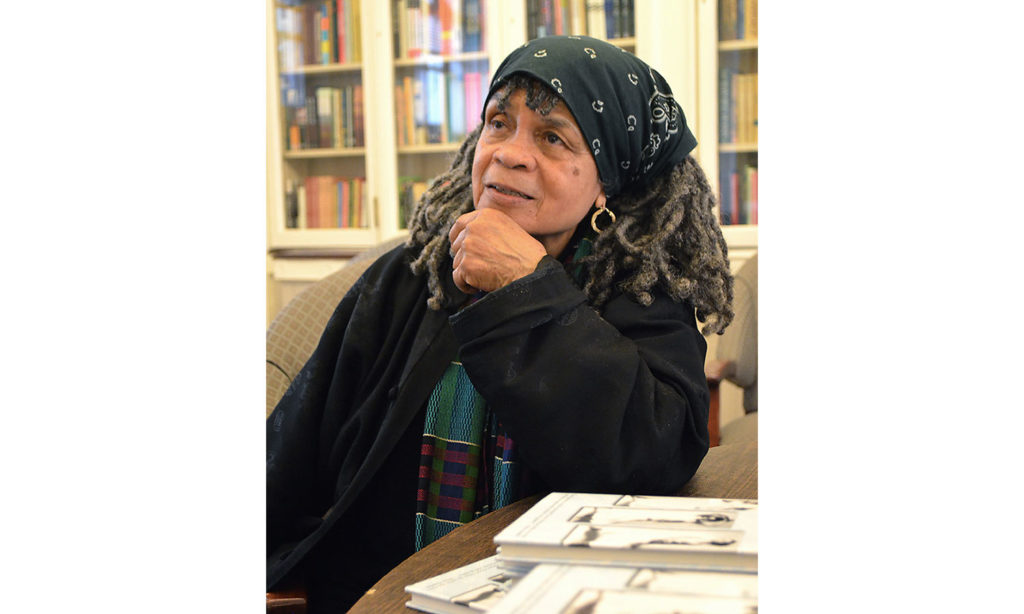 Poet Sonia Sanchez will accept the 62nd Edward MacDowell Medal at a public ceremony in Peterborough on July 10, 2022. (Photo by Tom Hallock)

Poet Sonia Sanchez, the author of more than 17 internationally renowned volumes of verse, will receive the Edward MacDowell Medal at a ceremony on the MacDowell grounds on Sunday, July 10, 2022. The return of the outdoor public celebration, including introductory remarks by novelist and MacDowell Fellow Walter Mosley and picnicking on the grounds, will be the first since August of 2019.

“I had tears in my eyes as I learned about this award,” said Sanchez, who is widely considered one of the most important writers of the Black Arts Movement. “When I consider my dear friend, Sister Toni, and so many others who have been given this award, I feel so welcomed to be part of that group. It is a great honor to be this year’s awardee. MacDowell has such a great herstory and history of caring and concern for artists; it is a joy this place exists to keep the world on a path toward re-civilization, peace, and humanity.”

Sanchez is the author of more than 20 books of poetry, children’s literature, and plays, including We a BaddDDD People, Homegirls and Handgrenades (winner of the 1985 American Book Award), Under a Soprano Sky, Does Your House Have Lions?, Like the Singing Coming off the Drums, Shake Loose My Skin, and Morning Haiku.

“Sonia Sanchez’s illustrious career spans seven decades. Her commanding oeuvre continues to elevate language’s ability to give voice to entire communities (their daily pleasures and pains) inside our shared and troubled history,” said Claudia Rankine, a MacDowell Fellow and chairman of this year’s MacDowell Medal selection panel. “A founding member of the Black Arts Movement, this poet, activist, scholar, and American treasure is, without doubt, a major figure in the landscape of American letters.”

Rankine, the author of Citizen: An American Lyric, Don’t Let Me Be Lonely, three plays, and the essay collection Just Us: An American Conversation, was joined on the Medal Selection panel by MacDowell Fellow and Board Member Vijay Seshadri, and poets and essayists Erica Hunt, Nuar Alsadir, Jericho Brown, and David St. John.

“The magnificent Sonia Sanchez – lifelong poet, crafter of the complex and the clear, the hard and the beautiful – acknowledges who we are on this earth through American eras hopeful, frightening, and imponderable,” said MacDowell Board Chair, Fellow, and best-selling author Nell Painter. “She is an eloquent international figure, helping us understand the world. Over our many decades, I have looked up to Sonia Sanchez as bard and also as a forger of the new intellectual field of Black studies that has remade our consciousness.”

A sponsor of the Women’s International League for Peace and Freedom, Sanchez is the winner of numerous awards, including the Robert Frost Medal for distinguished lifetime service to American poetry and the Langston Hughes Poetry Award. Other awards and honors include a National Endowment for the Arts grant, the 1985 Lucretia Mott Award, the 2004 Harper Lee Award, the 2009 Robert Creeley Award, the 2018 Wallace Stevens Award, the 2019 Anisfield-Wolf Lifetime Achievement Award, and the 2021 Dorothy and Lillian Gish Prize. In December of 2011, Philadelphia Mayor Michael Nutter selected Sonia Sanchez as Philadelphia’s first Poet Laureate.

Sanchez’s other books include Homecoming, Love Poems, I’ve Been a Woman, A Sound Investment and Other Stories, Wounded in the House of a Friend, and most recently Collected Poems. In addition to being a contributing editor to Black Scholar and The Journal of African Studies, she has edited the anthology We Be Word Sorcerers: 25 Stories by Black Americans. BMa: The Sonia Sanchez Literary Review is the first African American Journal that discusses the work of Sonia Sanchez and the Black Arts Movement.

Sanchez will be introduced to the Medal Day crowd by Mosley, who will speak to the poet’s impact on our culture before she receives the MacDowell Medal from Painter. Mosley is an American novelist, most widely recognized for his crime fiction. His first published book, Devil in a Blue Dress, was the basis of a 1995 movie starring Denzel Washington.

The MacDowell Medal, which has rotated annually among all disciplines practiced at MacDowell, has been awarded since 1960 to an artist who has made an outstanding contribution to American culture. Its presentation, which often draws more than 1,200 visitors from around the country to MacDowell’s 450-acre wooded campus, offers the public the opportunity to walk the paths on the one day each year that MacDowell is open to the public. This free, public arts event is made possible with the support of generous individual contributors and business sponsors. For more information, please visit https://www.macdowell.org/events/2022-medal-day. Join the conversation with #MacDowellMedal.

Find out about the history of Medal Day.