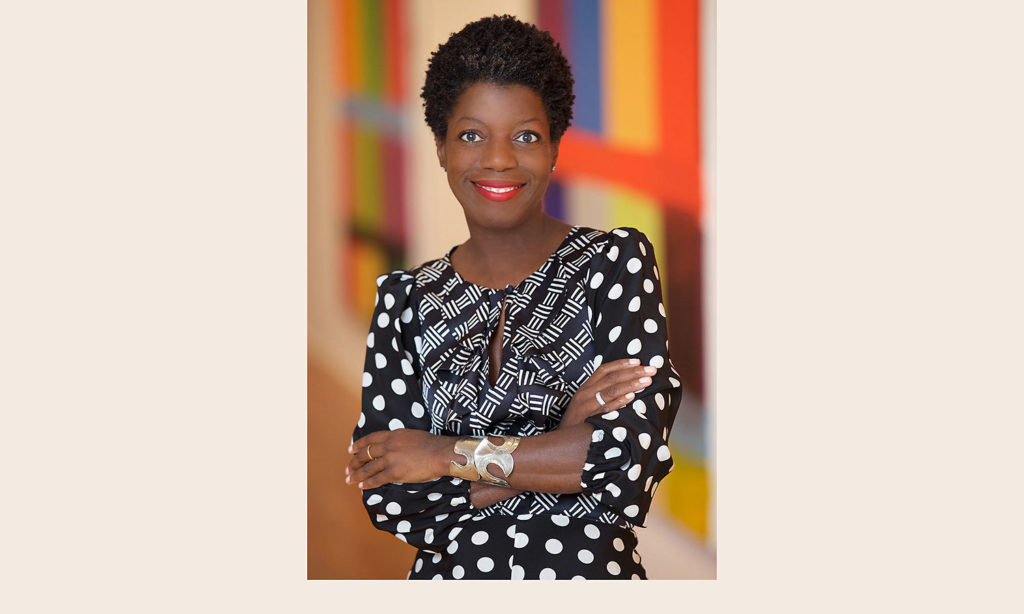 Director and Chief Curator of The Studio Museum in Harlem Thelma Golden will introduce 60th Edward MacDowell Medalist Charles Gaines during a free public ceremony on Sunday, August 11, 2019, in Peterborough. Golden, an influential and groundbreaking curator and museum director devoted to visual artists of African descent, will offer context for Gaines’s choice as this year’s medalist. She has known Gaines since 1993.

Golden, who launched her influential curatorial career at the Whitney Museum of American Art, has organized numerous groundbreaking exhibitions. Under her leadership since 2005, the Studio Museum has gained increased renown as a global leader in the exhibition of contemporary art, a center for innovative education, and a cultural anchor in the Harlem community. Golden’s curatorial vision has cemented the Museum as “one of New York City’s most consistently stimulating and innovative art institutions,” according to Holland Cotter of The New York Times.

Golden felt the “enormous impact” of Gaines’s work and influence through his students in the early 1990’s, even though not meeting him until he approached her to participate in a symposium on black art and mainstream criticism in April of 1993.

The result of discussions with Gaines that grew out of that experience “changed forever how I saw art and artists,” says Golden, who credits Gaines with a “rigorous intellectual landscape of vision and mind…. The precision of his intellect and his incredible formal skill are beautifully evident across his bodies of work.”

The MacDowell Colony, one of the nation’s leading contemporary arts programs, has awarded the Edward MacDowell Medal annually since 1960 to an individual who has made an outstanding contribution to American culture. Gaines joins an august roster of previous MacDowell Medal recipients including Aaron Copland (1961), Robert Frost (1962), Georgia O’Keeffe (1972), Willem de Kooning (1975), Louise Bourgeois (1990), Stephen Sondheim (2013), Toni Morrison (2016), and Art Spiegelman (2018).

Gaines, whose work in the 1970s explored the use of mathematical and numeric systems to create soft, numbered marks in ink on a grid, quickly became a pivotal figure in the field of conceptual art with a body of work engaging formulas and systems that interrogate relationships between the objective and subjective realms. His work has become only more influential since then, with numerous exhibitions in the U.S. and internationally. His work is in prominent public collections such as the Museum of Modern Art and Whitney Museum of American Art in New York, the Studio Museum in Harlem, and the Los Angeles County Museum of Art. Gaines’s work was also presented at the Venice Biennale in 2007 and 2015.

MacDowell Colony Chairman, Fellow, and Pulitzer Prize-winning author Michael Chabon will present the Medal to Gaines on Sunday, August 11, 2019, beginning at 12:15 p.m. at the MacDowell Colony grounds at 100 High Street in Peterborough, New Hampshire. MacDowell Board President Andrew Senchak, Executive Director Philip Himberg, and Resident Director David Macy will also take part. Medal Day marks the one day each year that the Colony is open to the public. Open studios hosted by MacDowell artists-in-residence begin at 2 p.m. and end at 5 p.m., and guests can enjoy picnic lunches on MacDowell’s picturesque acreage by pre-ordering or bringing their own. This free, public arts event is made possible with the support of generous contributors and business sponsors. For more information, please visit www.macdowellcolony.org/events