The Art of Journalism as Practiced by Writer Jennifer Percy 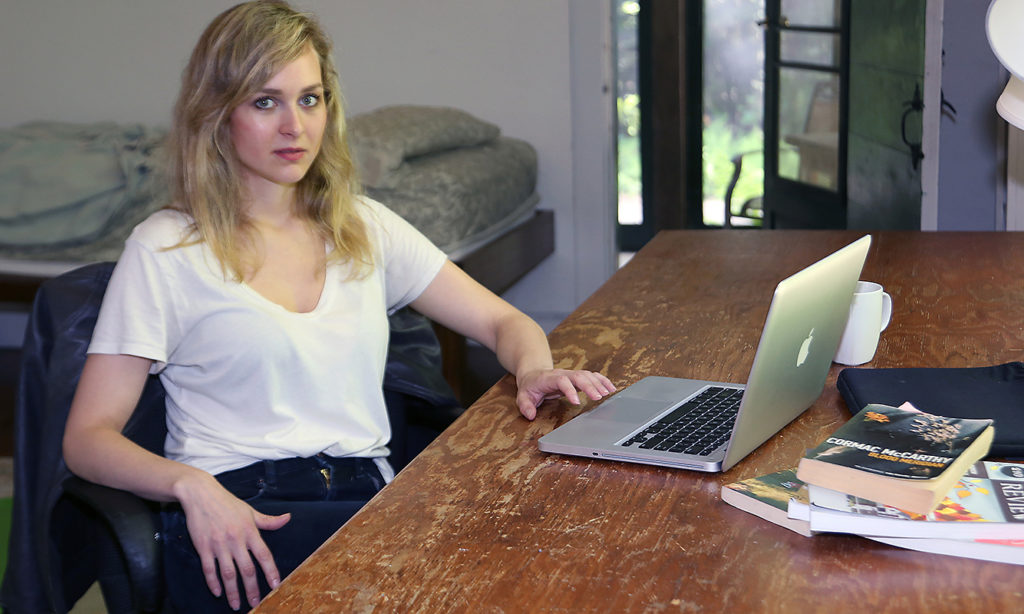 Author Jennifer Percy takes a break from writing in Delta Omicron Studio in 2015.

Writer Jennifer Percy came to The MacDowell Colony in the summer of 2015 after spending a couple of months reporting in Iraq and Syria. She was drafting a new nonfiction book and working on several long-form articles based on that reporting. Her first book, Demon Camp: A Soldier’s Exorcism, looks into the effects of PTSD, both in individual soldiers and the communities they inhabit once back from war. The book chronicles one particular returned soldier’s struggle with visions of dead war buddies and a demon who occupies his thoughts after a 2005 tour in Afghanistan. Percy continues to research and write about difficult subjects. She recently answered a half a dozen questions about her journalistic practice and her MacDowell residency.

Q: What are the major difficulties for you when working as a journalist who reports deeply on the subject matter of places like Syria and Iraq?

Percy: The guilt of getting to come home when everyone you’ve met has to stay behind. I met so many lovely people. They share stories and meals and lives with you. You come back and you feel you owe them something more than a story. You feel like you can’t move on to a new topic because if you do you’ll be abandoning them. Often I stay in touch on Facebook and social media. I check up with them if I hear bad news. One Syrian regularly writes to say he is threatened by ISIS and needs my help getting out of the country. An Iraqi texted me during his escape journey across the Mediterranean Sea. He kept asking what to do if something happened. He was worried he wouldn’t make it. He asked me to check on his town that had been sacked by ISIS. What was I to do? One of the men I wrote about in Syria, an American from Ohio, returned to the fight this year and was killed outside Raqqa. Someone emailed me to let me know. It’s hard knowing that what you write might be the thing that outlasts them. There is so much at stake.

Q: Do you have any specific methods for finding stories in places like Iraq and Syria? Once you've found a potential subject, how do you prepare for your reporting trip?

Percy: Since I’m based in the U.S. I’ll often first find my stories in the news. Usually I’ll read a short piece and get a sense that there is a larger story to tell, or I’ll be intrigued by a character who I’d like to meet and learn more about. Once I’m on the ground I’m often taken by surprise. The world I encounter is vastly different than what I imagined. I end up following threads as they come my way. It’s exciting and unnerving – but always rewarding. When I’m on the ground I usually encounter more stories than I have time to write about. These come about through interviews with locals, and even more so from translators who are very plugged into what’s unfolding at any given time.

Q: Have the new challenges of funding long-form journalism changed the way you think about or approach other opportunities like residencies?

Percy: Absolutely. It’s wonderful that MacDowell is embracing long-form journalism. It takes just as much solitude, focus, and time as any other form and the opportunity to think of the written piece as art (and not just something to sell) is going to benefit all aspects of that writer’s life. What many people forget is that the actual writing comes after months of research, weeks of transcription, dozens of interviews, hours of research. Finding time and space to write after all those months is a difficult task.

Q: How does the process of writing differ or benefit at a residency program like MacDowell?

Percy: Some journalists do much of their work in the field and write on a deadline but many do not. I never write until many weeks after I return. I need to reflect on the situation and, more importantly, I need time to return to this world. Often when I return, I wake up not knowing where I am. I act a little weird. I’m not used to ordinary life. This is an extreme example, but after Syria I flew back to New York. There are lots of kids in my neighborhood of Park Slope that play on the sidewalk. I remember seeing a bunch of red paint they’d spilled on the ground. I stood over it and I couldn’t figure it out. How was all this blood on the ground? So I try to wait until I’m a bit rested and not so spooked to begin writing. I get a lot of pressure to turn around a piece very quickly, but often the deadline isn’t set until I have a draft done. It’s different than newspaper writing. You don’t have the pressure to be timely in the way you would for a newspaper. I went to MacDowell two weeks after my trip to Syria and Iraq. I finished two long-form pieces while I was there. It would have taken me three times as long if I were at home. The pieces took an incredible amount of focus and isolation to get right.

Q: MacDowell’s cultivation of different disciplines in one place is intentional. Can you reflect on what effect working among creators of a wide range of disciplines has had on your work?

Percy: It’s so important. Everyone is struggling to create something beautiful and meaningful and all that energy is contagious. I think when everyone is doing the same thing the atmosphere can sometimes feel competitive. But this felt communal. I remember going to see one of the visual artists present her work, and I remember not really understanding it fully because I was trying too hard to put a narrative on it. She started to explain her work and it was this completely different language she was using to talk about it. She had all these piles of cement in the room that changed shape and color over time when she played classical music. I’m not sure I understand it, still, but in the end it didn’t matter. It wasn’t about that. I’ll never forget how beautiful it was to watch her move about the room and discuss her project. I love that kind of disorienting encounter.

Percy: I have a hard time waking up early. At MacDowell I had no problem. I was so excited to start my day. The meals were key. I loved meeting up with everyone for delicious meals. I got to wake up every day to a homemade breakfast with a flower from the garden set next to the eggs. It sounds ridiculous but I’ll never forget those flowers. I felt nurtured and cared for and it made all the difference.

Jennifer Percy is a contributing editor at New Republic and is the author of the nonfiction book Demon Camp: A Soldier’s Exorcism (Scribner) which was a New York Times Notable Book of 2014 and a Barnes & Noble Discover Great New Writers Pick.

Read a Q&A with Fellow Shane Bauer about his journalism.

Read a Q&A with photojournalist and Fellow Finbarr O’Reilly.

Read a Q&A with writer Jessica Stern about her latest project.