The Eternal Importance of the Artist’s Mystery 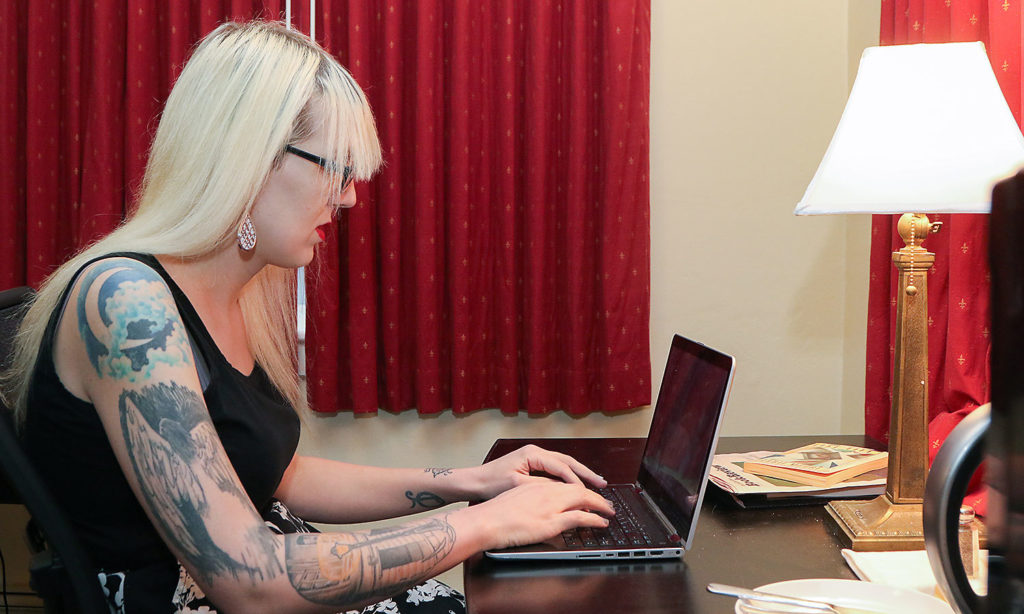 During her stay in Barnard Studio during a 2020 MacDowell residency, Casey Plett worked on her short story collection A Dream of a Woman.

Last year in Harper’s, the queer writer Garth Greenwell wrote an essay, “Making Meaning: Against Relevance in Art,” where he detailed the material and metaphysical pressures artists experience for their work to be “relevant”:

“Artists feel the anxiety of relevance during every season of fellowship applications, those rituals of supplication, when we have to make a case for ourselves in a way that feels entirely foreign, for me at least, to the real motivations of art. Why is this the right project for this moment? these applications often ask. If I had a question like that on my mind as I tried to make art, I would never write another word. This pressure has only increased in recent years.” (emphasis mine)

I agree with Greenwell’s assessment. I see such pressure as particularly weighing on artists from marginalized populations (often the very populations such questions of relevancy are intended to uplift). It’s not unique to just the artists shooting for fellowships and grants either — I hear such anxieties all the time, for example, from my beginning creative writing students: Writers who worry their work is not “important,” that it’s “silly,” that perhaps it doesn’t “mean anything.” To this end, in my writing workshops I always say the following: “If writing seems impossible, you have to let go of the idea that your writing is going to do anything. You have to let go of the idea that what you make will be “valuable” or “important” or “good” or “lasting.” Don’t put that on yourself. That’s not even really for you to decide. Readers will decide those things, not you.”

Now, certainly, it’s a needed corrective for the funders and power-brokers of art to support marginalized artists who have historically have been left out. But I often find myself wishing there was room to do that while encouraging the whimsy and murkiness that accompanies artistic process; the time to allow the expansion of the mystery.

Artist residencies can be the perfect places to enable creative people to explore such mysteries, though said residencies would do well to avoid front-loading the pressure on artists to anticipate the outcomes. As these sanctuaries wrestle with goals of equity, intersectionality, and how to better steward resources, I would suggest that, as counterintuitive as it might seem, easing the requirement for artists to detail the relevancy of their intended projects is actually key to achieving said goals.

My personal experience here comes largely from my career as a transgender writer. I find the pressure to be serious on a near life-threatening scale — well, it’s endemic among both trans artists and those promoting said art. In 2016, when the advance reader’s copy for Meredith Russo’s YA novel If I Was Your Girl landed on my doorstep, it was so overrun with screaming blurbs about the book’s importance, it was like the mirror image of a cigarette pack: “WILL CHANGE MINDS AND OPEN HEARTS.” “LITERALLY EVERYONE NEEDS TO READ THIS BOOK.” “…WILL MAKE THE WORLD A BETTER, MORE EMPATHETIC PLACE.” “THIS IS THE KIND OF BOOK THAT CAN SAVE LIVES.”

Now: The book is excellent, one of my favorite pieces of YA and trans art, and I wrote a long review about how moving I found it. But the blurbs are also the kind of language I thought of while reading Greenwell’s essay: “Why is this the right project for this moment?” Answering that question for my own work, I could make up an answer to please funders, but the true answer in my gut is always: How should I know if this is the “right project” for “this moment”? I don’t know if the book I’m writing will make the world a better place. I don’t know if it will change anyone’s mind. I’m not writing to do that. Why I’m writing fiction at all is impossible to disentangle from mystery. What I’d like to tell them is, “Your fellowship/residency/funding will allow the space for the project to expand. What that’s going to look like, I can only tell you once it’s over. I was at MacDowell from Nov 2019-Jan 2020. I finished much of my fiction collection, A Dream of A Woman, while I was there, and it was published last fall. Was MacDowell’s space key to how I could write the book? Indisputably yes. Could I have foretold you the final form of the book beforehand? Not at all.

A story, if you’ll stick with me, on that Venn Diagram of art and mystery:

When I was 19, I became obsessed with Eternal Sunshine of the Spotless Mind, a strange, beautiful sci-fi-inflected romance film about a bickering couple who erase each other from their memories. It’s from 2004 and stars Jim Carrey and Kate Winslet. When I discovered it, I’d just begun college, and unbeknownst to me, I was also about to enter a depressed, miserable period of my life, a period where I was dying inside.

When I say I became “obsessed” with Eternal Sunshine, I mean obsessed. Almost daily, I would watch its 16-minute intro as I got stoned and went to sleep, waking in the morning to the DVD menu screen. At least once a month, sometimes more, I re-watched it all the way through. I bought posters, I bought screenshot art, I read the original screenplay. When I visited New York for the first time, I spent one of my three precious days traveling out to Montauk, where key scenes of the movie were shot. (20 years old! First time in New York City! I chose to spend a third of my time on the Long Island Railroad.)

I’d point out trivia to my roommate when I corralled him into a re-watch: “See how he reacted to that punch in the arm? That was unscripted! Kate Winslet just hit him off-the-cuff!” For a short time (I’d like to think this a coincidence) I dated a girl who had in her MySpace profile one of the more famous quotes from Winslet’s character: “Too many guys think I’m a concept, or I complete them, or I’m gonna ‘make them alive’. But I’m just a fucked up girl who’s looking for my own peace of mind. Don’t assign me yours.”

I still re-watch Eternal Sunshine about once a year. It achieved escape velocity on my personal map a long time ago — where suddenly a piece of art is just part of you.

What does this have to do with Greenwell’s essay? Because I could make up a false, decent tale as to why I became obsessed with that movie — as that depressive period in college coincided with the explicit realization that I was trans. “I want to be a woman” is the phrase I used at the time. In those years, I didn’t understand my options, didn’t understand the world around me, didn’t know any transgender women. I had begun to name my problem, but didn’t know what to do about it.

Shortly after I left college, I transitioned — I got on estrogen and told everyone I was a woman. My life’s had its ups and downs since then, but it’s never looked as blank, as void-like, as those depressive college years.

So: If I wanted to, I could conjure a transgender lens to situate my past with Eternal Sunshine. It would be so disturbingly easy, and I’ve made jokes to that effect before. That Winslet’s character represented the woman I wanted to become, that Carrey’s represented the man I wanted to leave behind. It would be a reasonable story. I loved Clementine’s fluorescent hair and clothes and her devil-may-care free spirit. I fancied myself a bashful, soft, needy boy, like quiet, sad-sack Joel. Running through the movie are themes of disembodiment, detachment, and bodily dysphoria, themes that are quite common in both transgender art and life.

If I wanted, I could retroactively staple the current fashion in which I articulate my trans life onto a movie I depressively re-watched years ago, designating it a balm that anesthetized my fearful, closeted self. (I’m not saying this can’t happen sometimes, of course! I’m just saying it didn’t here, for me.)

If I chose to do this, I could perhaps supercharge claiming this old movie as newly relevant. Meaningful, imbue it with importance.

But when I mentally travel back to the memories of that time, I can feel any clean explanations of my relationship with that movie, trans or not, to be false — because the movie is about memory, loss, dedication, toxically nourishing relationships, and recursive love, things I’ve always loved about Eternal Sunshine, things that don’t neatly fit into my trans life more than anything else. (also, among other things, I dressed more like Clementine before transitioning than after when I think about it.)

The truth of whatever was going on in my muddled, stoned, closeted youthful brain when I superfan’d that movie from 2006 to 2009 is a koan, a series of Schrodinger’s cats, a mystery.

Greenwell talks about mystery, too, toward the end of his essay, relating an experience with a Slater Bradley painting he loved for reasons he couldn’t fully express, a painting he describes as: “a block of blue on a surface mounted on a white mat, the whole enclosed in a brass frame.”

“The experience I had viewing it was something like love,” Greenwell continues, “what the French call a coup de foudre, a thunderbolt, and I knew that I wanted to feel its effect again and again; I knew that it was something that would be, in some way I didn’t fully understand, useful to me.”

This is closer to my own truth of relevance, about my own artistic existence as both creator and witness that even in its most politically charged moments must make room for the unknown. It’s also how I feel about Eternal Sunshine both then and now, and perhaps is how artist residencies might revisit their need to pre-emptively know these answers: Greenwell says, “It helps me to do my work, this mystery hanging at my back; it helps me to live my life.”

Casey Plett is the author of Little Fish and A Safe Girl to Love, both winners of a Lambda Literary Award. She is the co-editor of Meanwhile, Elsewhere: Science Fiction and Fantasy from Transgender Writers, and winner of a Stonewall Book Award. She has been published in The New York Times ArtsBeat, McSweeney's Internet Tendency, and The Walrus. During her residency at MacDowell, she worked on her short story collection A Dream of a Woman, which was released last year.