"Tonal Conversations" Collaboration Sparked at MacDowell is Just the Beginning 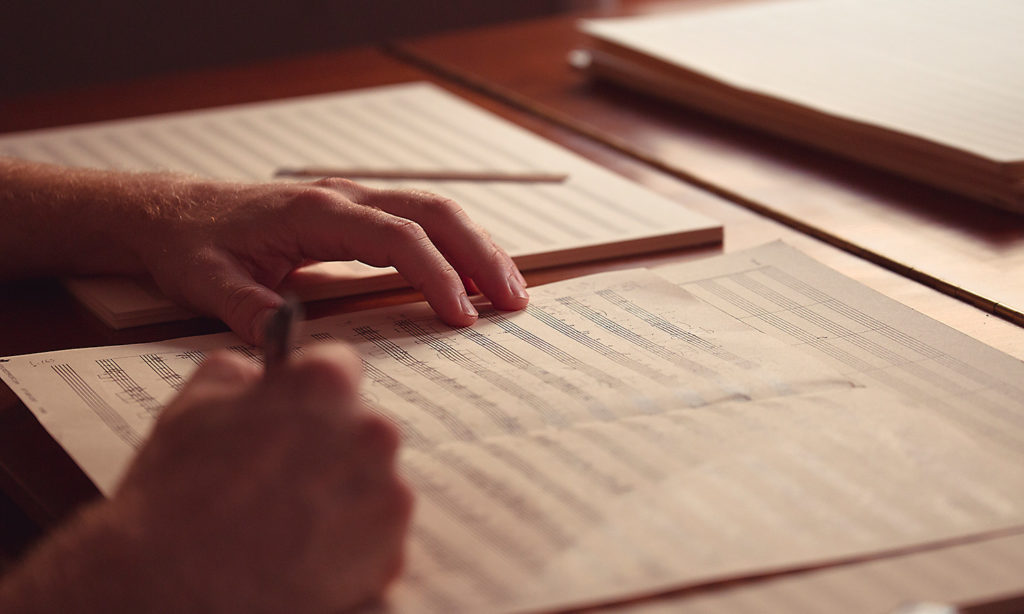 Christopher Zuar likes to work on paper as he composes. 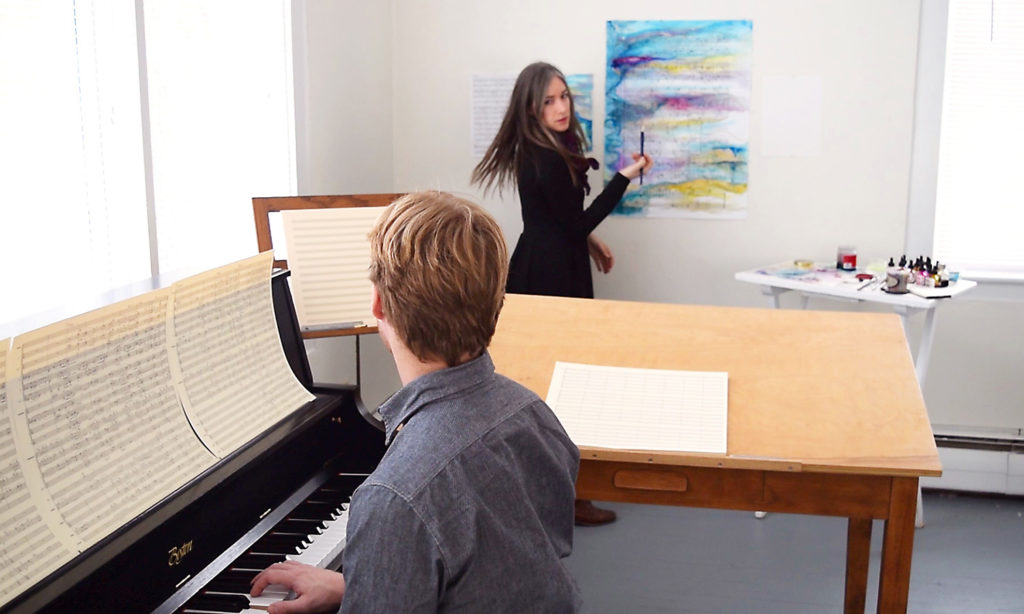 At MacDowell, the two artists experimented as Anne painted or drew as Chris played the piano. 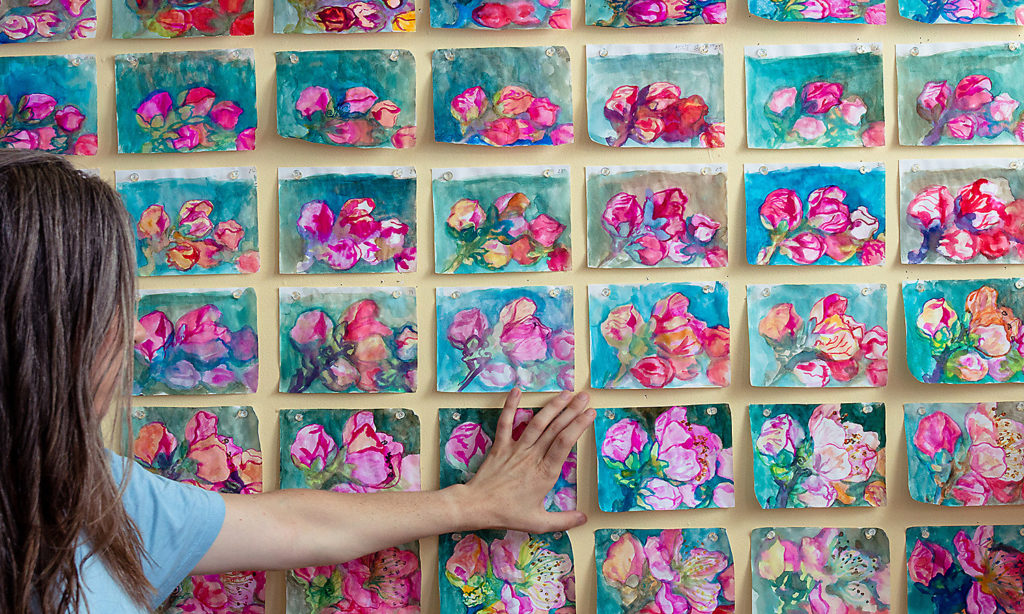 A complete set of watercolors resulted as Zuar played his part of his composition. 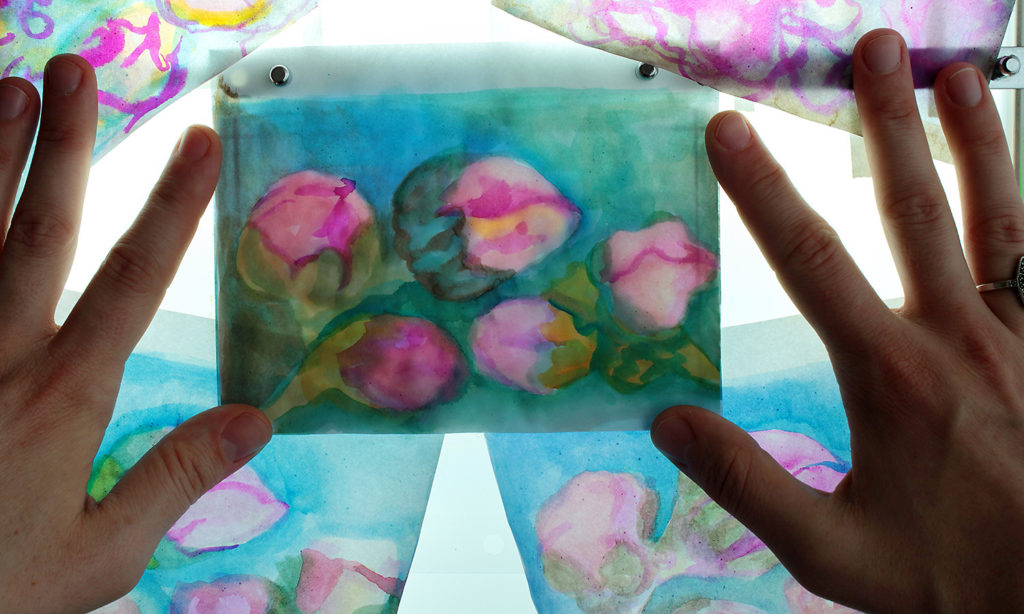 Anne then took her watercolors, eventually numbering in the thousands, and created an animation. 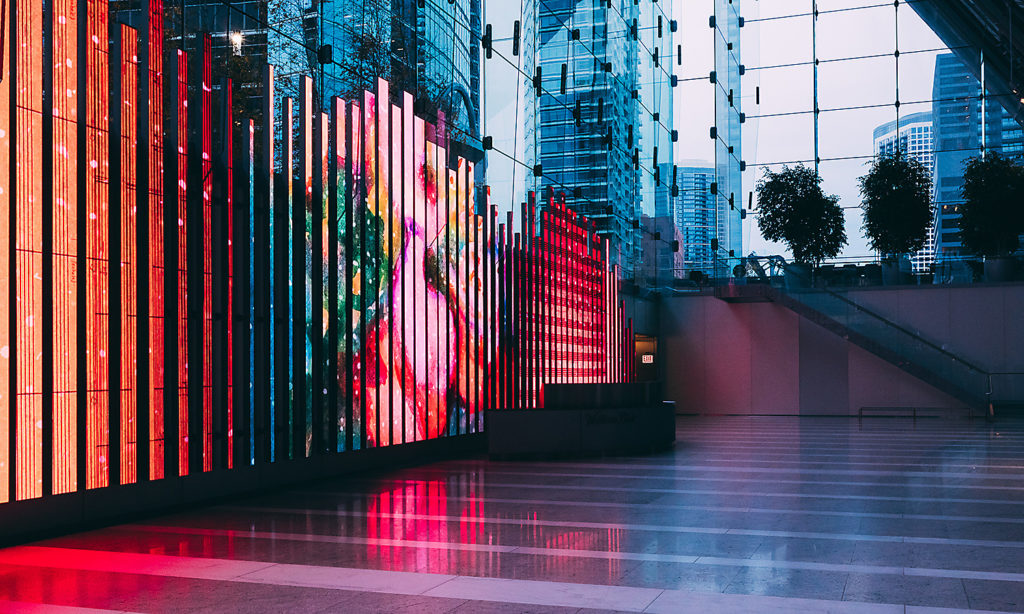 Tonal Conversations: Part 1 is a 22-minute piece with an animation set to the jazz composition.

Chris conducts the jazz orchestra live as the animation plays on a large-scale video sculpture behind the musicians. 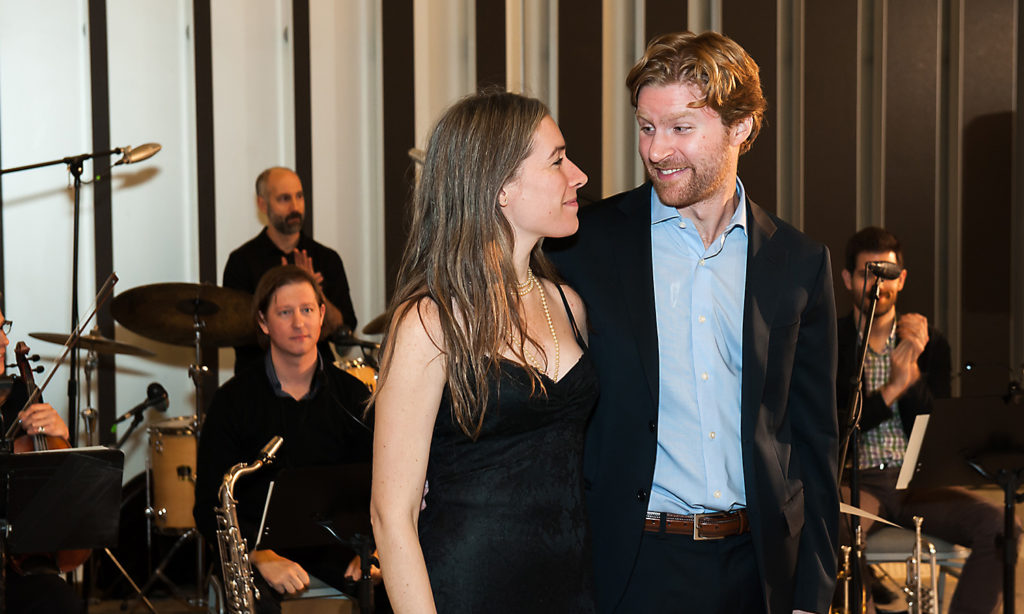 Anne and Chris are continuing the project after first premiering the work in Chicago in 2018.

While in residence at The MacDowell Colony in the winter of 2017, artists Anne Beal and Christopher Zuar found common ground in exchanging ideas about animation and music. As the animator and composer got to know one another, they explored the idea of collaborating on a project that grew out of Zuar’s composition work for his 20-piece jazz orchestra. Over the past three years, the collaboration has become Tonal Conversations, an album’s-worth of music (so far) accompanied by a stunning watercolor animation film. Part 1 premiered in Chicago (view the video here) and the work continues today.

Though the collaboration came about after their residencies, hints at how it would come together appeared on a particularly wintry day when MacDowell staff suggested Fellows remain indoors because of a brutal weather report. Anne’s studio (Putnam Graphics) was just over the hill from Chris’s (MacDowell), so she went to visit him during the snowstorm. Anne found Chris improvising at the piano, staring into the snow outside his window. “Chris was repeating three notes to make a dreamy theme, and I asked him if he was trying to suggest snow falling,” says Beal.

“I was,” says Zuar, “and I asked her about what she saw in the music, before revealing that I, too, was imagining snow.”

This musical theme — a few notes rolling gently in sequence — would become the introduction to “In Winter Blooms,” the first movement in Tonal Conversations.

Q: Was there a moment in your collaboration with Chris that was the spark behind developing your animation for Tonal Conversations, or was it a more gradual, step-by-step trade-off of ideas and inspiration?

Anne: The initial imagery for the animation is pretty immediate for me. I experience color and texture when I hear sounds — a form of synesthesia. My animation in Tonal Conversations is an attempt to express what I experience when I hear Chris’s music. Visualizing something multisensory is challenging, but the time-based medium of animation allows me to express what I’m seeing with more freedom. Instead of one painting, I create thousands of paintings. Developing a visual language that corresponds to Chris’s music, and building an environment for that in cinematic form, has been my primary role in the collaboration.

For Tonal Conversations: Part 1, I created the animation in stages. Chris composes for a full jazz orchestra, but he writes his music at the piano. I spent a lot of time hanging out with him in his workspace at The MacDowell Colony with my watercolors, making sketches. Once he had gotten far enough along in each of his three pieces, I asked him to make a recording for me so that I could bring it back to my studio and work from the recording. Each time I visited Chris’s studio, I would gather more material — taking secret cell-phone videos of him and drawing in my sketchbook. As he composed the music, I created a body of hand-painted animation work. This process carried over beyond our residencies and took about a year: our timeline was based on Chris finishing the pieces before his recording session and our impending Chicago show. Once Chris recorded the three pieces with his jazz orchestra, I had just a few weeks to assemble all the animation I’d made into a 22-minute film that played in 2018 on a large-scale video sculpture called 150 Media Stream in Chicago.

Q: What was the most surprising thing you learned about working across disciplines? Was there a notable change in your work?

Chris: Until this collaboration, I have always worked alone, so I have not had to consider another artist’s opinion or needs. Learning how to communicate has been creatively invigorating and challenging; the most difficult but most rewarding artistic endeavor I’ve experienced. Anne is a musician, so she’s able to speak my language, but through her own experience, which is heavily influenced by visual elements connected to the sounds. Her response to my work has given me some insight into my own creative processes I hadn’t considered before. She questions me about certain things that I would take for granted in the work. It makes me take a step back and reassess certain convictions; even if, after thinking about it, I reach the initial conclusion, I have still grown as an artist because I was made to think about it.

Q: How has the experience of being in residence at MacDowell with artists working in different disciplines informed your work, and how will that affect it going forward?

Anne: One of the many gifts of being in residence at MacDowell is being around other artists immersed in their own work. Everyone is in a heightened creative state. I may find myself in an intense philosophical conversation over breakfast, or visiting another fellow’s sculpture studio and learning about a new material. In the evenings, artists are invited to gather in the library and give presentations about what they are working on. I went to these whenever possible because I gained so much inspiration from listening to artists across disciplines describe what motivates them, what their work is about, and where they hope their current project will go. The artists I had the honor of being in residence with are still friends; when I moved to New York, they were the people who welcomed me. Their work continues to inspire me, as I make a point to attend their plays, readings, performances, and gallery openings.

Chris: At MacDowell, I got to see artists across mediums solving similar artistic problems using different processes. The most enjoyable aspects of any residency, for me, is the cross-pollination that occurs between disciplines. Conversations with fellow artists, especially ones outside of my area of work, have been invaluable. I take solace in the fact that we, as artists, all share in the same joys, frustrations, and sorrows that result from the act of creation. This can be comforting after a difficult day in the studio, where one conversation with a painter or writer, sharing a similarly bad day (or good!), can help me approach my problem from a different perspective. Opening up your creative process to another serious artist is amazing and challenging. It’s not only about being vulnerable to another’s judgments, but technically and creatively it means finding inspiration in a different discipline.

Anne: The MacDowell colony was a haven for me to be completely absorbed in my work, while having the luxury of ignoring my basic needs. There was no need for me to take time away from my work to go grocery shopping, cook meals for myself, dress up to go out, or deal with the stresses of the Internet. MacDowell provided an environment where nothing was standing in the way of my studio time.

Q: How has ‘Tonal Conversations’ evolved since its genesis at the MacDowell Colony, and what has it meant to you?

Chris: Tonal Conversations has grown with our relationship. As we have gotten to know one another, we have developed a creative intimacy through this project. It feels like we are making a long-form piece about our lives together. The process itself has its challenges: both our mediums are dense (some might say “tedious,” but we like it that way) and require physical space, which is hard to come by in New York. I write on large manuscript paper and require a piano; Anne makes thousands of paintings on paper and needs at least enough studio space for her animation stand, camera equipment, and computer desk. The nature of our individual mediums can be pretty solitary, so it’s fun to touch base at the end of a work day to see what we’ve made. We are one another’s cheerleaders, critics, and advisers on this project. Individually, we have full creative lives with short films, commissioned music, freelancing and teaching. Tonal Conversations is a way for us to build something beautiful together. We are actively looking for the next place to exhibit this project, which now includes an additional 20 minutes of material.